You are here: Home / SHTF Plan / Your Government At Work: Florida Residents Warned They’ll Be Ticketed for Hurricane-Damaged Homes

This report was originally published by the Anti-Media Team at AntiMedia.org 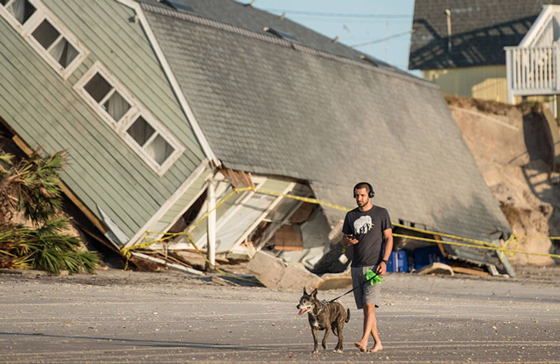 At a time when South Floridians rocked by Hurricane Irma were still surveying the damage to their properties, the county of Miami-Dade apparently thought it appropriate to begin handing out safety notices.

Celso Perez told local WSVN-TV that he, his family, and his neighbors were starting to clear fallen trees from the streets after the storm passed through at nine in the morning on Monday. Hours later, in the afternoon, Perez got a visit from the county.

“And we thought he was here to help us or offer some type of assistance with the trees, maybe he was going to bring us ice or something,” Perez told WSVN. Instead, the official slapped a safety notice on the only part of Perez’s fence still standing.

“I laughed,” he said. “I thought he was kidding. ‘You are kidding right? We just had a hurricane six hours ago.’ ‘No, I’m not kidding. I have to cite you for this.’ I just laughed. OK, whatever; knock yourself out!”

But Perez stopped laughing when the official told him he would be writing up a report and would be back to check on the property. Perez told WSVN that the man said he’d “have to write me a fine” if the fence wasn’t up to code by then.

The South Floridian says he understands that there is a lot of work that needs to be done but that the county’s rush to issue warnings was inappropriate:

“Give us a minute to breathe. Let us get our power back on. And I wouldn’t mind if they told me that a few days down the line or due time but it bothers me that they came out here just a few hours after the storm had passed.”

On the issue of restoring power, Reason noted that at the time Miami-Dade was handing out citations — the WSVN investigation found Perez was far from alone; the county handed out 680 pool barrier and 177 electrical hazard notices in the hours after Irma — 16,510 homes and businesses were still without power.

When Reason tried to confirm with Miami-Dade if monetary fines would be attached to citations, the county responded with the following statement:

“We were looking to advise residents of the following hazards on their properties that they may not have been aware of, but that pose a life safety threat: damaged structures that rendered them unsafe, unsecured pools with no barriers, electrical hazards (down lines, damaged meters) and gas hazards (damaged meters). If any of these hazards were found, our inspectors gave out a safety notice, which is neither a notice of violation warning nor a citation. That means there is no fine attached. The safety notices given to property owners identify the hazard, steps that should be taken to correct the hazard, and who to contact for additional information.”

Fine or no, WSVN’s legal expert and Broward County public defender, Howard Finkelstein, said the timing was “awful” for the people trying to recover:

“This is outrageous. After Irma, people were stressed, they were worried and for a government official to slap a warning notice on them to add to their misery is insulting.”

This report was originally published by the Anti-Media Team at AntiMedia.org