Connecticut isn’t the only state in New England that’s facing a budget showdown today. As Reuters reports, Maine is bracing for a possible partial government shutdown on Friday – what would be the first in the state since 1991 – as Republican Governor Paul LePage has warned he will reject any budget deal that does not cut income taxes.

LePage, a second-term Republican who faced national scrutiny and calls to resign earlier this year after making an allegedly racist comment about out-of-state drug dealers worsening the heroin epidemic in Maine, said he would declare a state of civil emergency if a budget is not reached by midnight, which would keep state police, prisons, parks and tax collection services but close most other aspects of state government, according to Reuters. 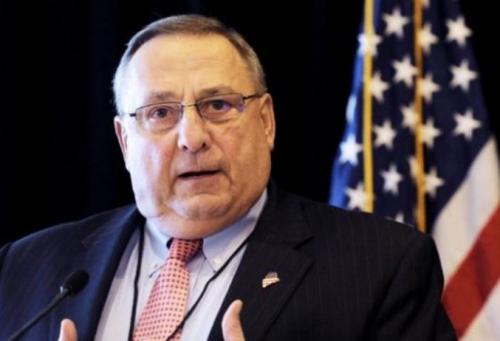 “I will tell you this: If they put a tax increase, ready for a shutdown. End of story,” LePage said in a Thursday interview on Maine’s WGAN radio. “They’re playing chicken at 100 miles per hour and I’m telling you something, you want to play chicken, let’s play chicken.”

The conflict at the center of the budget showdown is the issue of funding the state’s schools, as Reuters explains.

“Legislators are negotiating a roughly $7 billion two-year budget, with the main sticking point being how to fully fund state schools. Voters in November passed a measure imposing a 3 percent income tax on state residents who earn more than $200,000 a year, a measure the governor and statehouse Republicans object to.

The Democratic Speaker of the state House of Representatives, Sara Gideon, has blasted the threat of a shutdown, saying earlier this week, “We must find a path forward and close this budget.”

Maine state law gives the governor 10 days to respond to any budget passed by the legislator. LePage warned on Thursday he planned to wait that long before vetoing any budget that raised taxes. Most of the government would be shut during that time.”

Delays this year in negotiations leave the state, with a heavily tourist-dependent economy, facing the prospect of a partial government shutdown at the start of the long July 4 holiday weekend.”

Concerned about the potential impact of a shutdown, a local advocacy group is preemptively suing the state in federal court, seeking an order that would ensure that public assistance payments continue uninterrupted to the 450,000 people in the state, about one in three residents, who receive them.

To be sure, the stakes in Maine’s budget battle aren’t nearly as high as Connecticut’s. The nutmeg state has yet to pass a fiscal 2018 budget, and the deadline is Friday. Connecticut has the distinction of the third-worst ratings in the country, only behind Illinois and New Jersey after S&P, Moody’s and Fitch all downgraded the state last month in what officials described as a “call to action” for state leaders.

“We’ve been downgraded by everybody in the last six months, and in the last year two or three times,” Senate Republican President Len Fasano said cited by Fox news. “If we don’t pass a budget, I think we will see a further downward spiral.”

Connecticut is currently operating with a $5 billion budget deficit, and according to an analysis by Pew, the state only has $240 million in its ‘rainy day fund’; just five states have a smaller cushion. Much of the financial troubles are tied to the state’s pension system, which two-term Democratic Gov. Daniel Malloy’s office is seeking to address with a new plan to save the state $24 billion in “coming years.” One solution offered by Malloy is to require new state employees to be covered under a new hybrid pension system. The agreement, which Malloy’s office made with the state union, is tentative and awaiting legislative approval. Connecticut and Maine aren’t alone; Illinois also faces a Friday budget deadline that, if not met, could result in ratings agencies downgrading the state – which is struggling under the weight of unfunded public employee pensions – to junk status, virtually guaranteeing a debt-fueled death spiral that will likely lead to bankruptcy.

The showdown comes as Connecticut’s already narrow tax base has seen some major defections recently as corporations and wealthy hedge funds decamp for states like Florida, which offer lower tax rates, or cities like Boston and New York, which offer a stronger talent pool. Yesterday, we reported that Aetna, the insurance giant founded in Hartford where it has been for the past 164 years, announced it would move its headquarters to New York City despite intensive lobbying efforts by Connecticut officials. That move followed a departure by GE of its Fairfield HQ of 40 years.