You are here: Home / Zero Hedge / Why Wage Growth Will Remain Elusive

“American manufacturing could be poised to rebound as technological disruption shakes up global production chains, but that will offer little relief to displaced factory workers, according to new research by the McKinsey Global Institute.

Now, McKinsey sees conditions changing in a way that could favor U.S. producers: automation is weakening the case for labor arbitrage as wages rise in emerging market economies and developing market residents are coalescing into a new consumer class, among other factors.

While the U.S. could seize on those manufacturing growth opportunities, especially if the government and companies invest to make production more competitive, there are catches. Importantly, production might bounce back without bringing a lot of jobs in tow.

‘Even if we rebuild factories here and you build plants here, they’re just not going to employ thousands of people — that just doesn’t happen,’ said report co-author and McKinsey Global Institute Director James Manyika. ‘Find a factory anywhere in the world built in the last 5 years — not many people work there.’”

McKinsey is absolutely correct. While the President recently started a discussion on “Buy American,” most of the root belief in the efficacy of tax cuts, tax reform, and nationalism is rooted in the history of “Reagan-omics.”

The thing most overlooked by the majority of economists, politicians, and commentators, is the stark difference in the underlying economic and monetary fundamentals which provided the massive tailwind Reagan’s policies that simply don’t exist currently. As my partner, Michael Lebowitz, illustrated previously:

“Many investors are suddenly comparing Trump’s economic policy proposals to those of Ronald Reagan. For those that deem that bullish, we remind you that the economic environment and potential growth of 1982 was vastly different than it is today. Consider the following table:’” 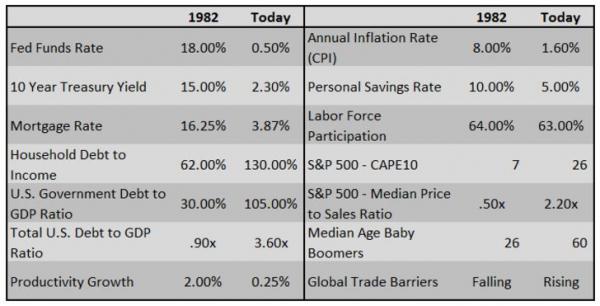 The issue of working harder, and earning less, continues to plague the economic minds driving both monetary and fiscal policy. Since the turn of the century, there has been a steady erosion of the growth rate in compensation as advancements in technology has limited the ability for workers to demand higher wages. 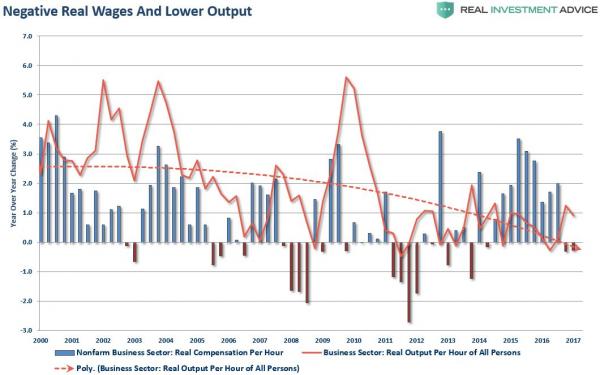 Whether it has been McDonald’s installing kiosks to replace cashiers or manufacturing companies automating assembly line jobs, the decision simply comes down to which is more cost-effective to increase bottom-line profitability. The answer is always – automation. This is shown in the chart below from McKinsey which shows which industries are the most susceptible to automation.

This continuing drive for profitability by reducing the cost of labor through increased productivity also explains the other conundrum of the “hidden unemployment.” 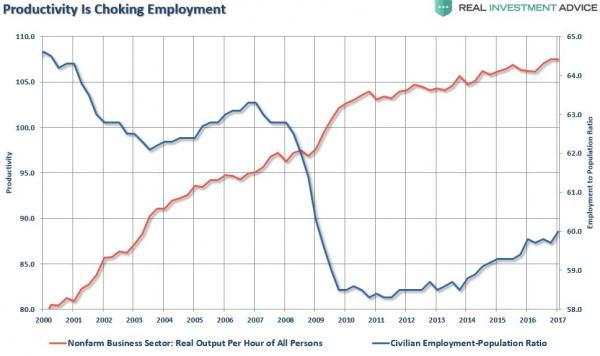 Businesses remain keenly focused on the bottom line, particularly as payroll and benefit costs continue to climb each year, as aggregate end demand drags. However, if businesses can increase productivity without increasing employment those net gains flow directly to the bottom line. This attitude, of course, not only stifles the need for employment but also lowers wage requirements as the available labor pool competes for fewer jobs.

“A growing number of companies are finding it difficult to recruit skilled workers, which threatens to curtail profits and growth, according to a quarterly survey conducted by the Washington-based National Association for Business Economics.

The results of NABE’s July Business Conditions Survey published on Monday showed that 34 percent of respondents have had trouble hiring skilled employees over the last three months, up from 27 percent in January. The Washington-based association polled 101 panelists, who are economists from companies and industry associations.

In response, companies are sponsoring foreign workers, expanding their search and hiring more independent contractors, according to the survey. They’re also boosting automation, stepping up internal training and in some cases improving pay, Jankowski said.

Perhaps at least partially as a result, more than a third of respondents cited labor costs as having the largest negative impact on their profits so far this year.”

In a nutshell, there is the entirety of the problem and the reason why wage growth remains nascent. Mike Shedlock summed up what is going on, stating:

Increasing productivity, lowering costs and increasing profit margins. In a slow growth economy, this has become the clarion call to corporate CEO’s. This is why, as shown on Tuesday, that while earnings per share have exploded, actual revenue growth remains feeble. 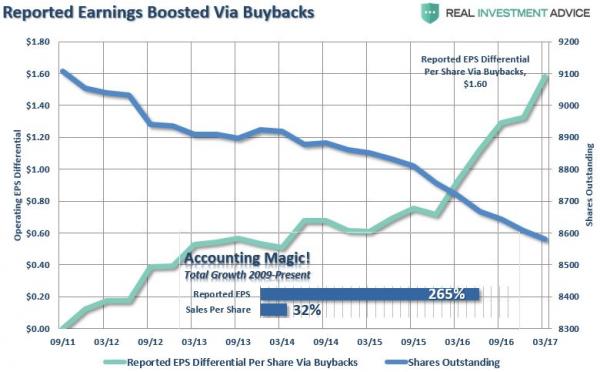 Working more and earning less. That is struggle faced by the average American today as each dollar buys less than it did before. Statistically, the economy may be recovering. However, for the average American it is a far more depressing reality. Capacity utilization still remains far weaker than at the peak of the last economic cycle and employment relative to the total working age population remains mired at lows. These components all feed back into the mental and financial state of the consumer which, in turn, impacts businesses future investment and hiring decisions – or lack thereof.

The real story here is that there is little hope for an already struggling middle class to gain any ground in an economic climate that continues to stack the cards against them.

But who knows, maybe someone will develop an “app” for that.