You are here: Home / Zero Hedge / Why Slumping Auto Sales May Not Say What You Think They Say

July auto sales (released today and charted below) remained weak and should trigger a few recession forecasts. In fact, over the past few months we’ve read about half a dozen commentaries linking the recent plunge in auto sales to an imminent recession. And we understand the reasoning, but we’ve yet to buy into it.

We agree that car sellers face a degree of demand saturation while potential buyers suffer from credit saturation, or at least that’s what the data seem to show. We also agree that the saturation twins tend to be late-cycle indicators. But we’d like to add another possible explanation for slowing auto sales, one that yields a different conclusion about recession risks.

Our view is this: Maybe the sales slump isn’t so much an independent force that’s driving the business cycle but merely a substitution for other types of spending.

Think, for example, health care. Classifying health care as a “big ticket” item in the consumer’s basket (seems reasonable), it surely falls in the big three, alongside homes and autos. There’s only so much room in the average middle-class budget for those three items. Changes in outlays for one of the items can easily squeeze the other two. And we think we can demonstrate the sumo battle between health care and auto sales with two charts.

The first chart shows three separate instances of soaring health spending. (Note that the 2016 data for this spending category won’t be available until midway through the Bureau of Economic Analysis’ Annual Update; it’s due on August 11. Therefore, we estimated 2016 and projected 2017 using the narrower “health care spending” category, which grew over the past six quarters at a pace only exceeded in 2015. Our 2016 estimate could be too low, thanks to the insurance premium “shock,” but we won’t find out until next Friday, and we’ll add an addendum to this post at that time.)

The chart shows that the most recent jump in health spending growth, beginning in 2014, was even bigger than earlier episodes. Of course, 2014 was also the first year of Obamacare. In our view, it stands to reason that Obamacare’s cost effects should eventually prey on other types of spending. Also, the most vulnerable types are those that require large commitments that are difficult to shed, such as lease payments on new cars.

While that may sound speculative, history seems to support our theory. Our second chart (below) shows that the recent decline in auto sales, if it continues, would be the third consecutive instance of health and autos occupying opposite ends of the same seesaw. 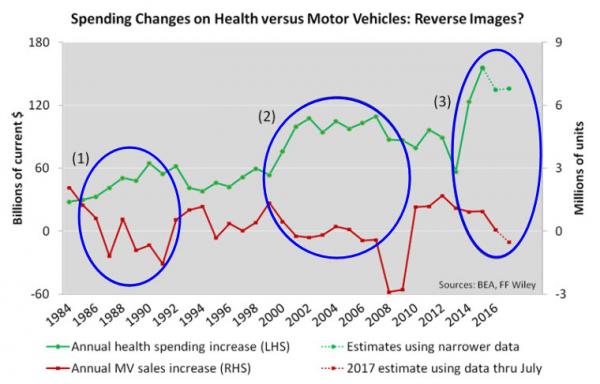 And how do our charts relate to recession risks?

Well, the math suggests that any hurt felt by those in the auto industry is mitigated—at least on a whole economy basis—by good times being had by those working in health care, pharmaceuticals, and insurance. In fact, if we’re right about that substitution, it may even be a net positive for GDP. Consider that each dollar of auto spending scatters among producers of autos and auto components all over the world, whereas a dollar of medical spending tends to be felt more strongly in the United States.

So, if you haven’t yet traded your old RAV4 for a new 4Runner because you’re shell-shocked by medical premium increases, you may have recycled more of your income back into the domestic economy than you otherwise would have. And the additional income you’re applying to medical costs shows up in GDP, per the charts above. Unfortunately, it also eats into other types of spending. But that fact alone shouldn’t cause you to change your business cycle forecast from expansion to recession. When it comes to recessions, you might put more weight on indicators such as lending standards, which, if they deteriorate, would tip the scales against many industries at once. (Stay tuned—the Fed’s lending standards survey for the second quarter should be released by next week at the latest.)

And because we can’t close this article without some snark…

To be clear, we’re offering only a short-term business-cycle view, not an endorsement of our current health system. We’re not applauding large increases in premiums, co-pays, and deductibles. In fact, we’d be more likely to join the bleacher bums raining “boos” on the health spending boom’s unfortunate side effects. Make sure to include those side effects in the “unintended consequences” column of your Obamacare scorecard.

Better yet, considering that the insurance and “doc” lobbies crafted much of the legislation (see, for example, this book), the growing consumption share accruing to insurers and medical providers probably wasn’t unintentional. It might be more accurate to switch it to the “intended consequences” column. Either way, it’s one of a number of challenges that demand our attention as the nation continues to debate the curiously named Affordable Care Act.