You are here: Home / Zero Hedge / When “Whatever It Takes” Ends

“Deflationary forces have been replaced by reflationary ones.” – Mario Draghi

And here is how global 10-year bond yields reacted, 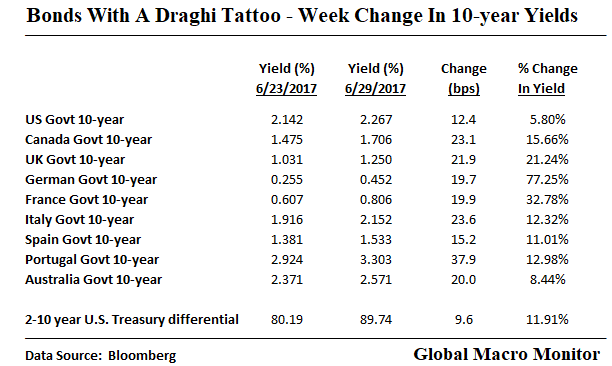 The German 10-year Bund yield increased 77 percent — OK, from a low base — and bonds across the world from Canada to Australia to the United States were tattooed.

Bond yields haven’t been trading on economic fundamentals for several years due to central bank financial represssion via quantitative easing (QE), ZIRP and NIRP. We have been pounding the table on this point,

Lot’s of hand wringing these days about the flattening yield curve. We still maintain our position that the signal from the bond market is significantly distorted due to the global central bank intervention (QE) into the bond markets. See here and here.

Most of what is happening with the U.S. yield curve is technical. – Global Macro Monitor, June 22, 2017

The major central banks have repressed interest rates throughout the world by engineering a structural shortage of high grade sovereign bonds with their quantitative easing (QE) programs. For example, as we posted last week, the combined market cap of just two stocks in the U.S. — Apple and Amazon — exceeds the entire stock of U.S. Treasury notes and bonds maturing in 2027-2047 when holdings of the Federal Reserve are excluded. 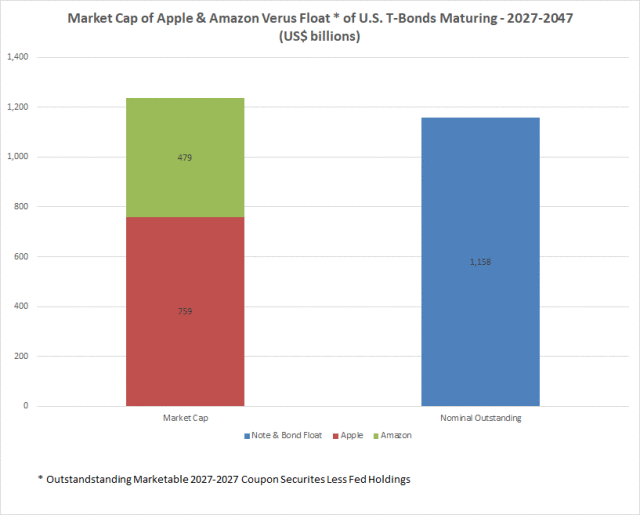 This is tantamount to holding a beach ball underwater. You know what happens when when the ball is released. Such as when a prominent central banker unexpectedly speaks out that the days of holding that ball underwater may be coming to an end. We just had a little taste of that this week.

The European Central Bank tried to walk back or dilute Draghi’s comments, but bond markets are not having it. The train has left the station and the path toward monetary normalization is, at least in rheotric, been entered into the GPS. The next few months shall be interesting.

Though we think the “correct” or equiblrium price for interest rates on bonds is serveral hundred basis points higher — 2-3 percent real yield plus inflation — we don’t think they get there “by way the crow flies” or in a straight line.

Several months ago, we cited a 2012 Federal Reserve paper estimating that yields on the 5-year note should be several hundred basis points higher if not for the recycling of reserves into U.S. Treasuries by the PBOC. The paper didn’t even take into account the impact of QE on bond and note yields,

A paper published by the Federal Reserve Board (FRB) in 2012 estimated the impact on interest rates of the capital flow recycling into the U.S. bond market,

We find that a $100 billion increase in foreign official inflows into U.S. Treasury notes and bonds lowers the 5-year yield by roughly 40 to 60 basis points in the short run. However, our VAR analysis shows that in the long-run, when we allow foreign private investors to react to the effects induced by a shock to foreign official holdings, the estimated effect is roughly -20 basis points per $100 billion. Putting these results into context, between 1995 and 2010 China acquired roughly $1.1 trillion in U.S. Treasury notes and bonds. A literal interpretation of our long-run estimates suggests that if China had not accumulated any foreign exchange reserves during this period, and therefore not acquired these $1.1 trillion in Treasuries, all else equal, the 5-year Treasury yield would have been roughly 2 percentage points higher by 2010. This effect is large enough to have implications for the effectiveness of monetary policy. – FRB

Extrapolating the above analysis to the current stock of foreign official Treasury holdings of around $4 trillion leads to nonsensical results, such as the 5-year yield should be 800 basis points higher than it is today. Obviously, the analysis should truncate the dependent variable – 5-year note yield — and ceteris paribus (other things being equal) does not hold in the real world. – GMM, March 18, 2017

Deflation is an urban myth, at least it has been in the U.S., as central banks have revealed their hand to do “whatever it takes” to fight it. Let us not conflate relative price moves with generalized deflation.

The end game will thus be an episode of ugly monetary/debt induced inflation, in our opinion. Not yet, however. Timing, my friends. 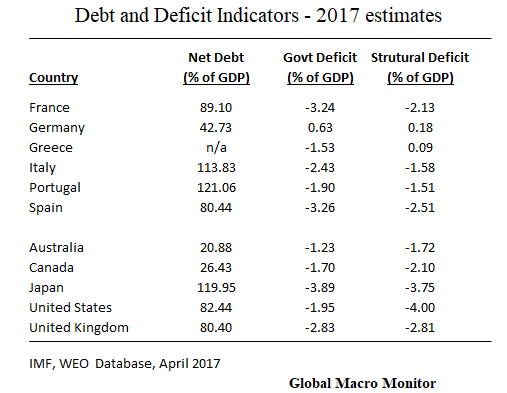