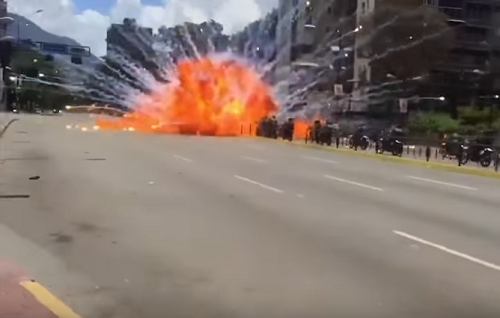 Venezuela was once again rocked with violence last weekend, after the Maduro regime won an election that essentially gave the ruling party unlimited power. The election established a parallel legislative body that was staffed entirely by Maduro supporters, thus allowing the socialist government to rewrite the constitution with little opposition. Venezuela has officially abandoned the remaining vestiges of democracy that had endured since Hugo Chavez came to power in 1999.

However, the election was widely regarded as a sham that most Venezuelans refused to participate in. Only 18.5% of registered voters showed up on election day. Despite that fact, the Maduro government is treating the election as a great success.

As of press time Sunday night, the state-run Venezuelan network VTV’s top story on its website declared that the election for the “constituents’ assembly,” a fabricated lawmaking body meant to usurp the power of the democratically-elected National Assembly, a success.

The election process, it claimed – citing a military official – “went about in complete normalcy” and peace. The head of the nation’s electoral council, Tibisay Lucena, told media outlets that there were limited violent incidents and high turnout among voters. The opposition, she claimed “are a small part of the country, a few small circles,” and the rest “are calmly voting since the early hours – 99 percent and more have come out to vote.”

In reality, Venezuela was anything but peaceful or normal last weekend. At least 13 protesters were killed, 3 of whom died at the ends of pro government paramilitary gangs. Also included in the death toll, were several teenagers, a 39-year-old political candidate who was shot to death in his home by unknown assailants, and a 30-year old leader of a regional youth opposition party.

However, the forces opposed to the Maduro regime weren’t the only ones to incur casualties. Seven police officers were injured when an IED, presumably set by opposition forces, exploded in Caracas.

If Venezuela isn’t in a state of civil war yet, it sure is close.