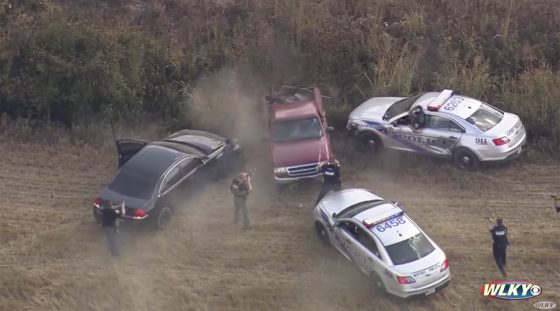 A man wanted for a string of purse thefts took police on a wild car chase from Kentucky to Indiana on Thursday.

The chase began in Louisville, Kentucky, after officers noticed the truck matched that of a man wanted for stealing purses from women at gas stations, reports WDRB – and once the pursuit started, it continued right across state lines into neighboring Indiana.

The lengthy chase came to an end when the suspect, identified as Robert G. Ellis II, ran over police spike strips before his truck was rammed by a police cruiser.

In the video footage, a Louisville Metro Police Department Officer and an Indiana State police trooper are seen hitting Ellis.

A spokesman for Indiana State police said it’s difficult to comment on the situation not knowing the exact details on whether or not the suspect was armed with a weapon or resisting arrest, reports WLKY:

“I cannot see the suspect that’s on the ground, I do not know what the suspect is doing. I do know we have several officers that are trying to take that person into custody. But, I can tell you this, if there were any improprieties by the Indiana state police trooper our superiors will review that video and that trooper will be held accountable for it. Again, if that happened we will stand responsible for anything that happens that any of our troopers could possibly do, we’ll stand responsible for that,” Indiana State police Sgt. Jerry Goodin said.

LMPD is investigating the situation to see if proper procedures and protocols were followed.

Police say they found at least a dozen purses in Ellis’s truck.

Ellis was hospitalized in Floyd County for injuries sustained in the incident, but remains in Indiana State Police custody. He was charged with fleeing and resisting law enforcement.

It’s not yet known if he will face charges in Kentucky, reports RT.

Contributed by Lily Dane of The Daily Sheeple.

Lily Dane is a staff writer for The Daily Sheeple. Her goal is to help people to “Wake the Flock Up!”