A couple of days ago we noted the efforts of “wacky and totally unhinged Tom Steyer” (Trump’s description, not ours) to impeach President Trump. The effort revolved around the launch of a $10 million campaign, which included a commercial during the World Series, to gather petition signatures calling for impeachment. Here’s a brief summary of the petition:

This is not a time for “patience” — Donald Trump is not fit for office. It is evident that there is zero reason to believe “he can be a good president.”

Whether by the nature of Mr. Trump’s relationship with Vladimir Putin and Russia, his willingness to exploit the office of the Presidency for his personal gain and treat the government like a family enterprise, his conduct during Charlottesville, his decision to pull out of the Paris climate accords, or his seeming determination to take the nation to war, he has violated the Constitution, the office of the Presidency, and the trust of the public. He is a clear and present danger to the United States of America.

Given Trump’s total lack of fitness for office, the question of impeachment becomes a very real issue should we succeed in our midterm goal. That makes it imperative for every Governor of every state, and every mayor of every city, to acknowledge where they stand. This question affects the lives of every single American. They deserve to hear whether or not our party is willing to do what is necessary to protect them and their families. This is not an academic exercise. The very stability of the Republic is at stake. 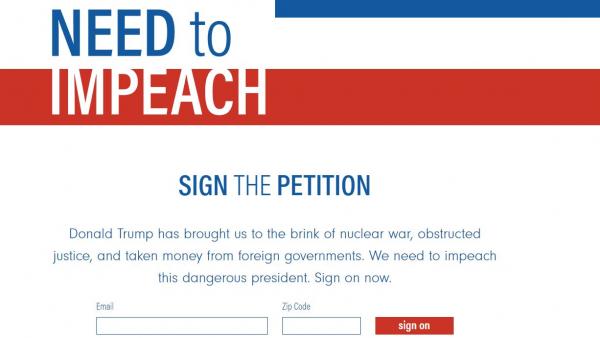 You get the idea….

Not surprisingly, Steyer’s efforts quickly earned him the honor of a Trump tweet and a new moniker: “Wacky and totally unhinged Tom Steyer.”

Wacky & totally unhinged Tom Steyer, who has been fighting me and my Make America Great Again agenda from beginning, never wins elections!

Now, according to Axios, Steyer has managed to gather a total of just over 1 million signatures on his petition in just a matter of 10 days…

Billionaire political activist Tom Steyer, who called for President Trump’s impeachment Oct. 20, with an ad that quickly went viral and was even noticed by the president, said he’s collected 1,119,720 signatures on his impeachment petition.

Our thought bubble: Impeachment proceedings are incredibly difficult to carry out, as we’ve written before. But more than a million names in ten days highlights the opposition to a president with a sub-40% approval rating.

…which should come as a surprise to precisely no one as there are still millions of disaffected Democrats all around the country who would sign almost any petition that brought with it the potential, however small, to disrupt the Presidency.

Of course, despite the hopes of Maxine Waters who we’re almost certain counts herself as one of the 1 million signatures, market odds still suggest that the notion of a Trump impeachment is fairly minimal… 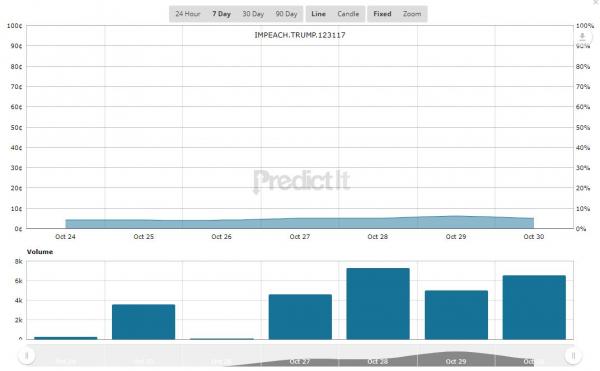 …yet somehow we suspect these low odds won’t serve as a deterrent to determined dems.