You are here: Home / The Daily Sheeple / Video: Teen Dead After Border Patrol Agents Encouraged Him to Drink Liquid Meth 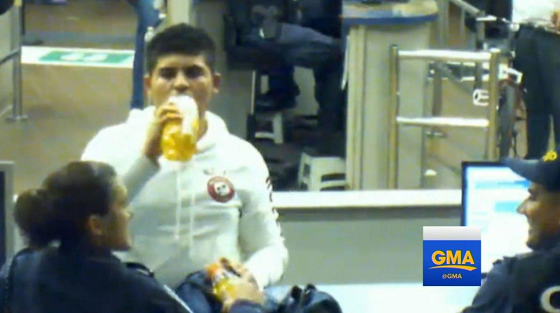 The footage, captured in 2013, sheds light on the previously unexplained death of Cruz Velazquez, the Mexican 16-year-old depicted in the footage. Velazquez was attempting to cross the border carrying two bottles containing liquefied methamphetamine, but was stopped and searched before he made it through.

Realizing the border agents were suspicious of the bottles’ contents, Velazquez offers to take a drink in order to “prove” they were legitimate. He died within two hours of imbibing the substance.

The officers on the scene had access to field test kits, but failed to make use of them, instead allowing the teen to drink what they suspected was a controlled substance.

Velazquez took four drinks from the bottle, while the officers appear to encourage him with hand gestures. They certainly make no attempt to intervene and stop the young man.

Though James Tomsheck, the former head of internal affairs for U.S. Customs and Border Protection, said the officers violated protocol and that he was told they would be punished, the agents have yet to face any disciplinary action.

“If [the officers] truly suspected there was a controlled substance in the bottle, they should’ve conducted a field test,” Tomsheck said.

Both officers involved deny they encouraged the teen to drink from the bottle, instead claiming he “volunteered” to take a drink. A strange excuse, as if “volunteering” to consume hard drugs in the presence of a police officer would fly in any other case.

While the United States paid the Velazquez family $1 million in a settlement earlier this year, the government did not apologize or admit any wrongdoing.