You are here: Home / The Daily Sheeple / Vermin Supreme Sues The City Of Concord: He Wanted 2 Ponies At A Protest 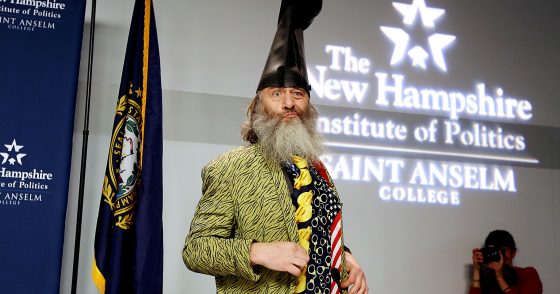 According to the complaint written by Vermin Supreme’s attorney Marc Randazza, of Randazza Legal Group, PLLC, out of Las Vegas, Nev., Supreme is protesting the book signing because Clinton’s book “What Happened,” which focused on the former presidential candidate’s 2016 campaign, “engages in a direct attack on to Mr. Supreme’s long-standing political platform … wherein he advocates for the socialized distribution of equine companions to every American.”

Supreme’s protest would include having two ponies on the sidewalk outside Gibson’s Bookstore, where the book signing will take place, according to the complaint, which was filed Friday in the United States District Court of New Hampshire. The city of Concord requires a permit to bring ponies to a protest, and Supreme alleges that the city has denied him said permit, “offering instead to issue a permit for the ponies on a different day in the same location.”

“Mr. Supreme’s message will be lost if he is not able to protest Hillary Clinton outside near the book signing,” the complaint reads. According to the complaint, Supreme had one of his political organizers, Keith Yergeau, contact Concord on his behalf to find out what he would need to do to carry out his protest. Yergeau was directed to Concord’s health and licensing officer Eugene Blake, who allegedly told him while there were no restrictions on having ponies outside of Gibson’s, the Concord Police Department had instructed him to deny the pony permit.

Supreme, of Massachusetts, who characterizes himself as a political activist, has run for various political offices, including the presidential office, in the United States since the 1980s. He is known for wearing a boot as a hat, and his platform has historically included mandatory toothbrushing and a pony for every American. Most recently, Supreme ran as a Libertarian in the 2016 presidential general election.

The passage of Clinton’s book Supreme takes issue with details a Facebook post that Clinton was sent by a supporter, according to the complaint. That post, originally written by a Helen Stickler, on March 10, 2016, reads as follows, according to New York Magazine:

“Bernie: ‘I think America should get a pony.’

Hillary: ‘How will you pay for the pony? Where will the pony come from? How will you get Congress to agree to the pony?’

Bernie Supporters: ‘She changed her position on ponies! #WhichHillary? #WitchHillary’

Headline: ‘Hillary Refuses to Give Every American a Pony’

Debate Moderator: ‘Hillary, how do you feel when people say you lie about ponies?’

Supreme also alleges that denying him the right to protest outside Gibson’s with ponies would rob him of a political opportunity, citing a “groundswell of support in New Hampshire” and the unlikeliness of Clinton holding another event in Concord anytime soon. –The Concord Monitor

Supreme is asking that the court grant an injunction that would allow him to carry out his protest, as well as reimbursement for his legal fees, and any damages that would be awarded during the trial. He is requesting a jury trial. Defendants in the case include the City of Concord, Concord police Chief Bradley Osgood, Blake and several miscellaneous Concord municipal employees.