You are here: Home / Zero Hedge / Venezuela Bolivar Loses A Third Of Its Value In The Past Week

With events in Venezuela now well into the endgame, following US sanctions that named “dictator” Maduro personally and a likely subsequent sanction that will cripple Venezuela’s oil industry promptly resulting in the nation’s insolvency as it loses its last remaining source of revenue, things are moving fast. So fast, in fact, that according to Reuters, Venezuela’s money supply surged 10% in just one week earlier this month, its largest single-week rise in a quarter of a century.

Meanwhile, in addition to now daily protests and strikes, Venezuela is undergoing a major economic crisis, with millions suffering food shortages, monthly wages worth only the tens of U.S. dollars, and soaring inflation – although no official data is available. The central bank said late on Friday the total amount of local currency in circulation, or M2 as of July 21, was 27.3 trillion bolivars, up 9.66% from the previous week.

This means that Venezuelans are forced to carry huge bundles of cash to make basic purchases, if they can afford to do so given weekly price rises on many goods of course.

When President Nicolas Maduro came to power in April 2013, it was at 24 per dollar.

Putting the country’s bitter economic end in context, the bolivar has lost a third of its value in the past week. 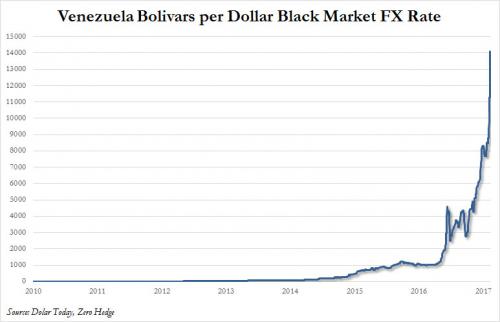 That takes care of the economy, as for how how socialism ends in a social context, in a poll released today Gallup found the Venezuela is now the least safe country in the world.

Venezuela’s score on Gallup’s Law and Order Index — its annual global gauge of how secure people feel — continued to follow the country’s descent into chaos in 2016. The country’s index score of 42 out of 100 was the lowest in the world last year. This number is likely even worse now as the country’s economic and political crisis deepens, including the election on Sunday that critics, including the U.S. and a growing list of nations, are denouncing as a “sham.”

Across 135 countries, Law and Order Index scores in 2016 ranged from a high of 97 in Singapore to the low of 42 in Venezuela. The index is based on people’s reported confidence in their local police, their feelings of personal safety, the incidence of theft in the past year and — for the first time in 2016 — the incidence of assault and mugging in the past year.

Venezuela’s scores on all of the individual questions that make up the current index were worse last year than at any point in the past decade. Just 12% of Venezuelans in 2016 said they felt safe walking alone at night where they live, and 14% expressed confidence in their police. These are not only the worst on record for Venezuela, but the worst for any country last year — and for the past 10 years.

To put Venezuela’s 12% who feel safe walking alone at night into perspective, the next-lowest figure in 2016 was more than twice as high as Venezuela: 28% in El Salvador. Among the 12 countries in which residents are least likely to say they feel safe walking alone at night, five are in Latin America. Another six are in sub-Saharan Africa — including two of that region’s more economically developed countries, South Africa (37%) and Botswana (38%).

At the same time, 38% of Venezuelans said they had had property or money stolen in the past year. This is up more than 10 percentage points from the previous year and a new record high for the country. Only five countries — all in sub-Saharan Africa — had higher percentages than Venezuela in 2016. 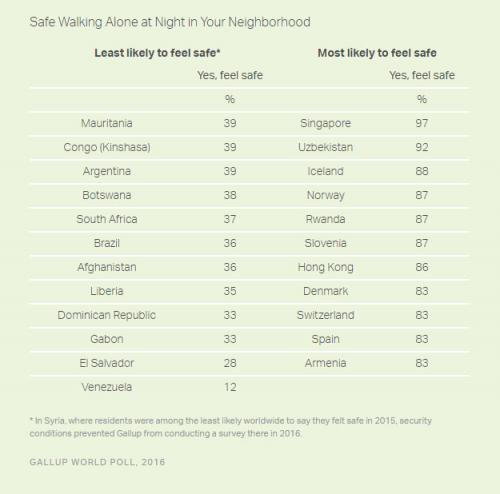