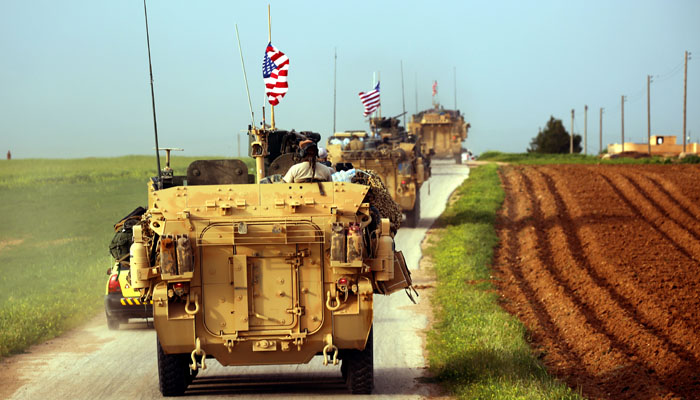 US forces, accompanied by Kurdish People’s Protection Units (YPG) fighters, drive their armoured vehicles near the northern Syrian village of Darbasiyah, on the border with Turkey on April 28, 2017. / AFP PHOTO / DELIL SOULEIMANUU

The U.S.-led coalition has tasked highly-experienced fighters of the Syrian Democratic Forces (SDF) with guarding oil fields in northeast Syria, the Syrian Observatory for Human Rights (SOHR) reported on April 25.

According to the London-based monitoring group, the step is one of many the coalition is taking to strengthen its influence in the northeastern region.

“This step comes in the framework of the ongoing work by the Americans to restate their influence in Eastern Euphrates,” the group’s report reads.

U.S. officers are reportedly paying secret visits to the al-Jazzrah base in the outskirt of the city of Raqqa. The base was one of the sites evacuated by U.S. troops last year to facilitate the Turkish attack on northeast Syria.

The SOHR said the U.S.-led coalition may be planning to return to the base which is still being used by its local ally – the SDF.

Earlier this month, the SOHR reported that the coalition recalled hundreds of SDF fighters who previously worked with its forces in northeast Syria to protect its bases there.

These steps by the U.S.-led coalition are likely meant to confront the growing presence of Russian and Syrian forces in the northeast. Moscow and Damascus are working to build strong influence in the region, mainly through cooperating with Arab tribes there.