You are here: Home / SouthFront / U.S. Strategic Bombers Trained Strikes On Territory Of Russia When They Were Intercepted By Fighter Jets Over Black Sea

On May 29, Russian fighters jets intercepted a group of US strategic bombers over the Black Sea. On June 1, the Russian Defense Ministry published an official report on the recent comments by Chief Chief of the Main Operational Directorate of the General Staff of the Russian Armed Forces regarding the increase of the NATO activity near the Russian territory.

Chief of the Main Operational Directorate of the General Staff of the Russian Armed Forces held a briefing on the level of NATO activity near the borders of Russia (source):

Colonel-General Sergei Rudskoy, Chief of the Main Operational Directorate of the General Staff (MOD GS) of the Russian Armed Forces, gave a briefing on the level of military activity of the United States and its NATO allies near the Russian borders.

“The Ministry of Defenсe of the Russian Federation constantly monitors and records the high level of military activity of the United States and its NATO allies near our borders,” said Sergey Rudskoy.

He noted that despite the spread of a new coronavirus infection, there is a significant increase in the number of combat training activities of the alliance’s troops, which have a clear anti-Russian orientation. The largest of them was the “Defender of Europe 2020” series of exercises. 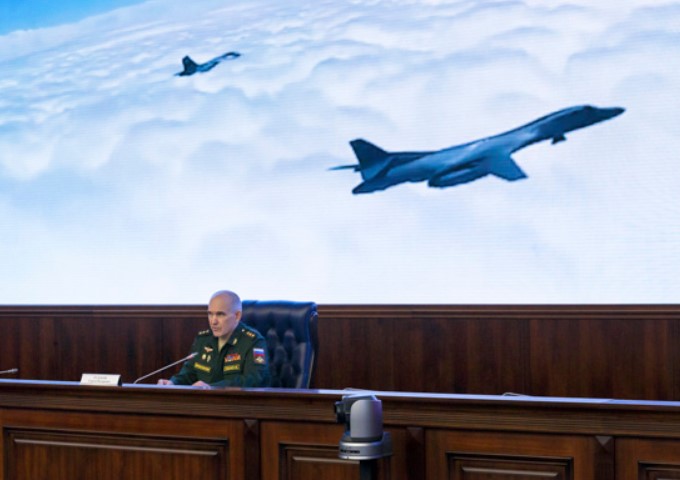 “Let me remind you that they provided for the transfer of a contingent of US troops from the continental United States to Europe. The US side planned to use more than 28,000 troops, 287 tanks, 449 armored personnel carriers and 95 helicopters in the exercises. – said the head of MOD GS. “Another 17 countries planned to form their own contingents of troops, and from the joint Armed Forces of NATO in Europe — to attract five multinational associations.”

Sergei Rudskoy stressed that the focus of the exercise is clearly anti-Russian. For example, during these events, amphibious operations in the Baltic states and the Caucasus were planned to take place on the eve of May 9. This did not happen only because of the quarantine measures.

In addition, in preparation for “Defender of Europe 2020”, attempts were made to circumvent the provisions of the Vienna document by splitting a large exercise into smaller ones and involving neutral states in maneuvers. 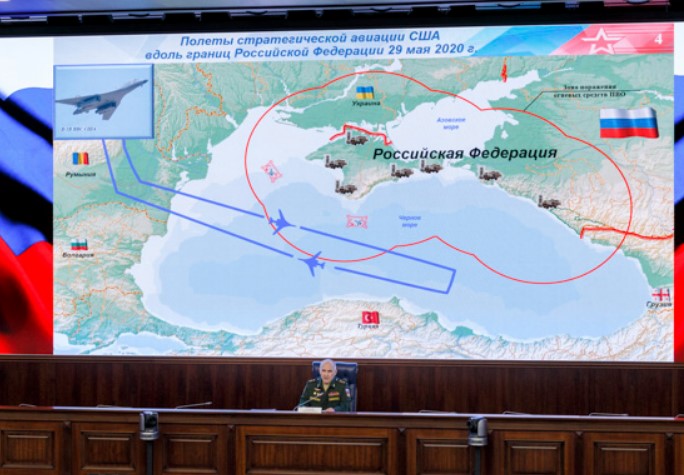 “During these flights, US planes were approaching the border of the Kaliningrad region at a distance of up to 10 km,” said Sergey Rudskoy. — In all cases, our Air Defense systems detected strategic bombers in a timely manner, established continuous monitoring and implemented measures to prevent incidents. Seven lifts of air defense duty fighters were performed. Anti-aircraft missiles were ready for immediate action.”

In addition, the Chief of MOD GS of the Russian Armed Forces noted that NATO’s activities are becoming more active in the Arctic.

For the first time since the end of the “Cold War”, on the eve of the 75th anniversary of the Victory over Nazi Germany in the Barents sea, a detachment of warships of the united naval forces of NATO held exercises. It consisted of three US DDG destroyers, which are the basis of the maritime component of the European segment of the global US missile defense system.

In addition, this campaign involved a nuclear-powered submarine and a universal supply transport of the US Navy, as well as the British Navy’s DDG frigate.

During the exercise, the tasks of hitting objects on the territory of the Russian Federation and intercepting Russian ballistic missiles were worked out.

“We regard such actions as provocative, despite the fact that the US side has notified these ships in the Barents sea in the shortest possible time,” Sergei Rudskoy said.

He also noted that the active actions of the Northern fleet, the deployment of NATO ships was detected in a timely manner, and their direct support and tracking of weapons was organized. This made it possible to avoid incidents and demonstrated the determination of the Russian Federation to protect its interests in the Arctic.

“The intensity of aerial reconnaissance in the Baltic, Black and eastern part of Mediterranean seas has also increased. Over the past month, 10 reconnaissance aircraft have flown over the Baltic and six over the Black sea. An US RQ-4B strategic reconnaissance drone was detected over the territory of Georgia, ” Colonel-General Sergey Rudskoy added.

Over the eastern Mediterranean, the US Navy planes of the type “Poseidon” systematically approaching the Russian military bases in Hmeymim and Tartus.

“To prevent their aggressive reconnaissance actions, we are forced to raise the duty fighters in the air. If in April there were seven such cases, in May there were already 17. In other words, it has increased more than twice, — the Chief of MOD GS of the Armed Forces of the Russian Federation gave data. — We regard such flights as contrary to the signed agreements on preventing incidents in Syrian airspace.”

Colonel-General Sergei Rudskoy stressed that such actions by the United States and its allies, hiding behind a far-fetched threat of “Russian aggression”, continue to destroy the existing security system in Europe.

“A significant increase in NATO military activity near the Russian borders was noted against the background of a possible American withdrawal from the Open Skies Treaty and earlier steps taken by Washington to destroy the INF Treaty,” said the Chief of MOD GS of the Russian Armed Forces. 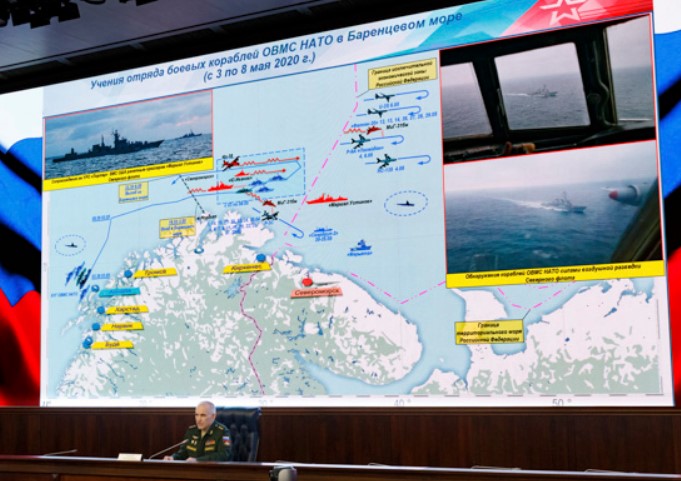 Work continues to build up the ABM infrastructure in Poland in addition to the US-deployed facility in Romania. All concerns regarding the possible deployment of Tomahawk cruise missiles at these bases remain.

In addition, the Globus-3 radar station in Northern Norway, in the village of Vardo, is continuing to modernize its missile defence capabilities and expand its capabilities to monitor the interior of the Russian territory.

“In turn, the Ministry of Defence of the Russian Federation has always adhered to a course aimed at building a constructive dialogue with NATO,” said Sergei Rudskoy.

Today, when the world’s efforts are focused on countering the spread of a new coronavirus infection, it is necessary to reduce the level of confrontation, to refrain from aggressive actions and the demonstration of strength.

“During high-level bilateral contacts with the leadership of NATO, we repeatedly discussed issues of preventing incidents in the military sphere and reducing the intensity of training activities conducted near our borders,” said the Chief of MOD GS of the Russian Armed Forces. – Only in 2019–2020 did they rise as the Chief of the General Staff of the Armed Forces of the Russian Federation, General of the Army Valery Gerasimov, in negotiations with the Supreme Allied Commander Europe, General Curtis Scaparroti and General Todd Walters, the chairmen of the US Joint Chiefs of Staff, General Joseph Dunford and General Mark Milly , Chairman of the NATO Military Committee, Chief Air Marshal Stuart Peach.”

In February of this year, at a meeting with the Supreme Allied Commander-in-Chief, General Todd Walters, the Russian side once again recalled its initiative to transfer areas of major operational and combat training activities deep into the territory of border countries.

“All our proposals to reduce military tension and prevent incidents were set forth in a letter from Russian Foreign Minister Sergei Lavrov to NATO Secretary General Jens Stoltenberg. In fact, our suggestions were ignored.

“We will continue the course towards de-escalation of the situation in Europe. This year, the Armed Forces do not provide for large-scale exercises near the borders of NATO member countries. Large-scale actions in the framework of the Caucasus-2020 strategic command-post exercise were moved inland. In the future, we are ready to adjust the areas of the exercises on a parity basis with the alliance.

In order to specify steps to eliminate sensitive incidents during aircraft and naval operations, we are ready to fix joint rules that determine the minimum distance of approach of aircraft and ships, as well as the interaction between crews.

We attach fundamental importance to the practical implementation of the initiative on the mutual use of transponders when flying combat aircraft in the Baltic. We look forward for the readiness of the NATO countries for concrete decisions on this issue.