You are here: Home / The Economic Collapse Blog / U.S. Economy Contracting “At Its Sharpest Pace Since World War Two” And “The Worst Is Yet To Come”
ShareTweetSubscribe 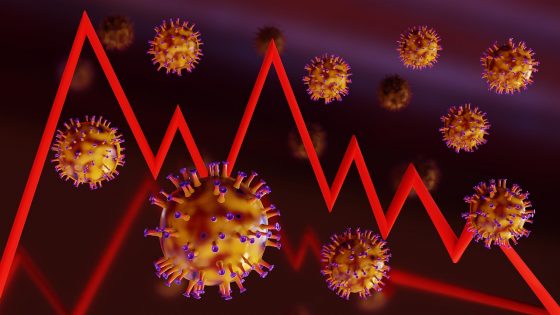 Fear of COVID-19 has unleashed economic chaos on a scale that has already surpassed anything that we witnessed during the last recession, and as you will see below, we are now being warned that “the worst is yet to come”. Many Americans are hoping that things can start to return to normal as the U.S. economy “reopens” in the weeks ahead, but the truth is that we are still in the very early chapters of this crisis. In fact, it is being estimated that we are only one-tenth of the way through this pandemic, and by “flattening the curve” we have actually extended the economic pain. You see, the truth is that most Americans are going to end up catching this virus one way or another. All of the “shelter-in-place” orders have temporarily slowed down the spread of this coronavirus, but once they are lifted it is inevitable that we will see new waves of people becoming infected. And if you think that a vaccine will be the golden ticket that gets us out of this mess, you might want to reconsider that belief, because there has never been a successful vaccine for any coronavirus. Of course it is possible that scientists could come up with something this time around, but if the virus mutates significantly that could render any potential vaccine absolutely useless.

In the days ahead, there will be a tremendous amount of debate about the correct way to fight this virus, but meanwhile the U.S. economy will continue to deteriorate.

In fact, Reuters is reporting that economists are now projecting that the U.S. economy is contracting “at its sharpest pace since World War Two”…

The deepening economic slump was also amplified by other data on Thursday showing manufacturing activity in the mid-Atlantic region plunged to levels last seen in 1980 and homebuilding tumbling by the most in 36 years in March.

The reports followed dismal reports on Wednesday of a record drop in retail sales in March and the biggest decline in factory output since 1946. Economists are predicting the economy, which they believe is already in recession, contracted in the first quarter at its sharpest pace since World War Two.

Yesterday, I documented the fact that we are in the midst of the largest tsunami of job losses in U.S. history by a very wide margin.

In fact, we are absolutely obliterating the old records, and that truly puts us in unchartered territory. And as bad as things have already gotten, one prominent expert told Reuters that “the worst is yet to come”…

Economists are estimating the economy contracted as much as 10.8% in the first quarter, which would be the steepest drop in gross domestic product since 1947. They say the massive fiscal package will likely provide little cushion for the economy.

“The economy is in a downward spiral where job losses beget job losses and the federal government emergency relief checks will not be enough to turn the tide,” said Chris Rupkey, chief economist at MUFG in New York. “The recovery is looking less V-shaped by the day as the deeper we fall, the harder it will be for the nation to climb back out of this deep hole the pandemic has dug for the economy. The worst is yet to come.”

As areas around the country start “reopening for business”, some of the jobs that were lost will come back.

But the truth is that millions of those jobs are gone permanently, and large numbers of the businesses that were closed down will never open again.

For the foreseeable future, a lot of Americans are going to avoid going to restaurants, bars, movie theaters, shopping malls and other businesses that require close human interaction. One expert that was interviewed by the Los Angeles Times says that for the next few years we need to accept the fact that the world “will be totally different than what we are used to”…

“The world that we are going to live in for at least the next two to three years will be totally different than what we are used to,” said Sung Won Sohn, president of SS Economics and professor at Loyola Marymount University.

“Because of the psychological shock that we have experienced, we are going to be more cautious, and we will probably spend less and save more, and we will have fewer contacts with other individuals,” he said. “We are going to be suspicious about things, [such as] whether people we are meeting have the virus and will the economy fall back down again.”

The fear that this pandemic has created is going to be with us for a very long time, and it is going to cause enormous shifts in economic behavior even after the U.S. starts “reopening”.

In an environment like this, very few people are buying vehicles, the housing market is already imploding all over the nation, and retailers are having a very difficult time envisioning any sort of a positive future for their industry at this point.

But at least we will all be getting big, fat socialist bailout checks from the government, right?

Actually, they won’t be that big, and for most Americans the checks will only get them through about one month.

So once that money is gone, will the federal government send us another round of “universal basic income” checks?

Now that they have gone down this rabbit hole, the federal government is in danger of sparking civil unrest if they don’t keep the checks coming. In fact, Jim Rickards is entirely convinced that large scale “social disorder” is on the way…

Looting, burglary and violence in the midst of a state of emergency are the shape of things to come.

The veneer of civilization is paper-thin and easily torn. Most people don’t realize how fragile it is. But they’re going to learn that lesson, I’m afraid.

Expect social disorder to get worse long before it gets better.

Unfortunately, Rickards is right on point, and I have also been warning about “great civil unrest” for a very long time. The delicately balanced debt-fueled prosperity that we had been enjoying for so many years has now been shattered, and things are going to get really ugly in this country.

And this coronavirus pandemic is not going away any time soon. Over the last 24 hours, the number of confirmed cases in the U.S. has jumped by more than 30,000 and the death toll has risen by more than 2,400 even though most of the nation is currently shut down.

Ending the lockdowns will give a boost to the economy, but it will also cause the virus to start spreading faster, and once that happens we could see another round of lockdowns.

In the end, our battle with COVID-19 will not be over until the virus has swept through most of the population, and we are not going to reach that point for quite a while.