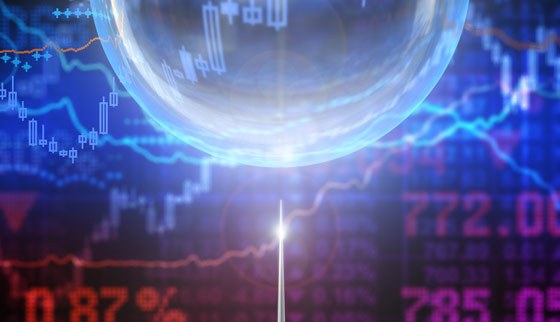 So far it appears that Trump’s ascent to the White House is going to have a positive effect on the US economy. It’s good that we have a president who is willing renegotiate disastrous trade deals, back our country out of crippling agreements like the Paris Climate Accord, and shut down the southern border, which has allowed millions of low skilled laborers to enter the country and drive down wages for American workers.

However, that probably doesn’t justify Trump’s current enthusiasm for the American economy. Over the past few days he has taken credit for all of the recent gains in the stock market.

That of course could prove to be a fatal mistake for his administration.

Donald Trump has inherited decades of financial mismanagement and unsustainable economic policies that have turned our economy into one giant debt bubble. He’s taking credit for impressive stock gains, but the stock market is definitely one of many messes that he has inherited from his predecessors.

Right now he thinks he’s taking credit for an economy that appears to be booming since he came into office. That’s going to bite him in the rear real soon, because he’s actually taking credit for the tail end of history’s largest financial bubble. He doesn’t realize it yet, but he is essentially owning a disaster in the making. Once that stock market bubble pops, and the economy falls into a tailspin, he’s definitely going receive all of the blame for the inevitable financial collapse. By some accounts, that’s exactly what the elites want him to do.

Perhaps Trump wouldn’t be so enthusiastic about slapping his name on this train wreck, if he knew that many experts are saying that the economy is in deep trouble, such as:

Keep in mind that those are just the warnings that experts made today. They’ve been warning that Trump is sitting on a major financial bubble ever since he was elected.

If he doesn’t stop taking credit for this wonderful economy (which isn’t actually wonderful since America is currently experiencing the slowest growth in decades), he’s going to take all of the blame when our financial system finally crashes and drags millions of ordinary Americans down with it. And the crooks on Wall Street and in the Federal Reserve, who are really responsible for this mess, are going to get away scot-free… again.

Peter Schiff Warns: “They’re Not Afraid Of Collapsing The Bubble On Trump’s Watch”

The Trump Collapse Scapegoat Narrative Has Now Been Launched