You are here: Home / SHTF Plan / Trump: “We’ll Handle North Korea. It Will Be Handled. We Handle Everything”

This report was originally filed by Tyler Durden at ZeroHedge.com 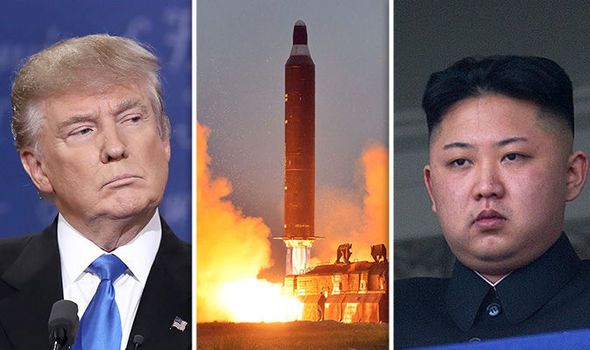 With Gen. John Kelly set to be sworn in as Trump’s new Chief of Staff, just days after the latest and most advanced North Korean ICBM test yet, one which can reportedly reach as much as half the major metro areas on the continental US, President Trump on Monday pledged to “handle” North Korea’s provocative belligerence, without specifying exactly how he would do so as he faces rising tensions and limited options.

“We’ll handle North Korea. We’re going to be able to handle North Korea. It will be handled. We handle everything,” Trump told reporters at the start of Monday’s first Cabinet meeting with his new Chief of Staff, flanked by Secretary of State Rex Tillerson and Defense Secretary James Mattis.

Pres. Trump at Cabinet meeting: “We’ll handle North Korea…it will be handled. We handle everything.” https://t.co/t3q481atrRpic.twitter.com/R5OjZDTBmi

The comments follow “guidance” from the US Ambassador to the UN, Nikki Haley, who on Sunday told CNN that the “time for talk” is over. As CNN noted, “it was a seemingly stark admission – the US ambassador to the UN suggesting the North Korean crisis couldn’t be solved through diplomatic channels in the Security Council.”

On Firday, the Pentagon confirmed that North Korea fired an intercontinental ballistic missile capable of reaching the United States. The missile, fired from north central North Korea, traveled 600 miles before it fell into the Sea of Japan. Following the missile test, Trump said Saturday on Twitter that he was “very disappointed” in China for not doing more to curb North Korea’s missile program.

“I am very disappointed in China,” Trump tweeted. “Our foolish past leaders have allowed them to make hundreds of billions of dollars a year in trade, yet they do NOTHING for us with North Korea, just talk.”

Trump has repeatedly pressed China, North Korea’s only major ally, to put more economic pressure on Pyongyang, lamenting that he has few other options left to try to check North Korea. Trump did not hint at what actions he could take on Monday, but recent comments suggest he could take more steps to try to get China to act.

On Monday, Reuters reported that a “frustrated” China hit back over Trump’s weekend tweets, with the state-run nationalistic Chinese tabloid Global Times saying that “Pyongyang is determined to develop its nuclear and missile program and does not care about military threats from the U.S. and South Korea” adding “how could Chinese sanctions change the situation?”

China wants both balanced trade with the United States and lasting peace on the Korean peninsula, its official Xinhua news agency added in a commentary. “However, to realize these goals, Beijing needs a more cooperative partner in the White House, not one who piles blame on China for the United States’ failures,” it added.

Also over the weekend, the United States flew two supersonic B-1B bombers over the Korean peninsula in a show of “lethal, overwhelming force” on Sunday in response to the missile test and the July 3 launch of the “Hwasong-14” rocket, the Pentagon said. The bombers took off from a U.S. air base in Guam and were joined by Japanese and South Korean fighter jets during the exercise.

“North Korea remains the most urgent threat to regional stability,” Pacific Air Forces commander General Terrence J. O’Shaughnessy said in a statement. “If called upon, we are ready to respond with rapid, lethal, and overwhelming force at a time and place of our choosing.”

As reported earlier, South Korea’s Kospi stock index, oblivious of the constant threat of military action in its northern neighbor, closed 0.07% in the green, just shy of all time highs.

This report was originally filed by Tyler Durden at ZeroHedge.com