In a Friday interview with Telemundo, President Trump revealed that he will be signing an executive order on immigration which would include a “road to citizenship” for recipients of the Obama-era Deferred Action for Childhood Arrivals (DACA) program. 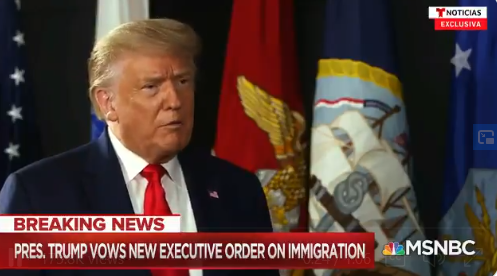 Speaking with anchor José Díaz-Balart, Trump slammed Democrats for nuking a DACA deal, but that the Supreme Court’s June decision blocking his plan to end the program gave him “tremendous power” to move forward on an executive order, according to The Hill.

“But, we put it in, and we’ll probably going to then be taking it out. We’re working out the legal complexities right now, but I’m going to be signing a very major immigration bill as an executive order, which Supreme Court now, because of the DACA decision, has given me the power to do that.”

Díaz-Balart then asked if the executive order would be temporary, to which Trump replied that the DACA path to citizenship would be “part of a much bigger bill on immigration.”

“It’s going to be a very big bill, a very good bill, and merit-based bill and it will include DACA, and I think people are going to be very happy,” said Trump, adding “But one of the aspects of the bill is going to be DACA. We’re going to have a road to citizenship.“

BREAKING: President Trump tells Telemundo’s @jdbalart he will sign an executive order on immigration that will include DACA in the coming weeks. #mtpdaily

Trump: “One of the aspects of the bill is going to be DACA. We are going to have a road to citizenship.” pic.twitter.com/M926cty8A1

Start your stopwatches for the “clarification” https://t.co/qi4PTd7nJT

Y’all screamed at me weeks ago when I confirmed @EmeraldRobinson’s reporting on this plan.

Amnesty Don is doing exactly what we said he was going to do. https://t.co/UXqx8euWhqpic.twitter.com/eV1177UqT4