You are here: Home / The Daily Sheeple / Trump, Putin Meet at G20 Summit to Discuss Geopolitics 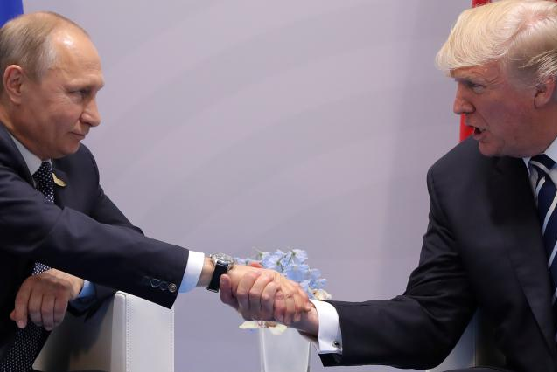 U.S. President Donald Trump and his Russian counterpart appeared to have a productive discussion on the sidelines of the G20 summit meeting in Hamburg, Germany, on Friday, covering issues related to a Syrian ceasefire, the conflict in Ukraine and the 2016 election, among other things.

“We had a very lengthy conversation,” Putin said after the discussion, which went on for over two hours—so long, in fact, that Putin was late for his meeting with Japanese Prime Minister Shinzo Abe, and at one point U.S. first lady Melania Trump came in to urge the leaders to conclude.

“President Putin and I have been discussing various things, and I think it’s going very well,” Trump told reporters while sitting beside the Russian leader.

“We’ve had some very, very good talks. We’re going to have a talk now and obviously that will continue. We look forward to a lot of very positive things happening for Russia, for the United States and for everybody concerned. And it’s an honor to be with you,” Trump said, addressing Putin.

After the meeting, officials from Washington and Moscow announced a new de-escalation agreement that will apply to areas in southwestern Syria.

In recent weeks, the United States and its allies in the rebel opposition have carried out several attacks on pro-Syrian forces in southern Syria, where a myriad of factions with different allegiances and goals make the battlefield increasingly complex.

“I think this is our first indication of the U.S. and Russia being able to work together in Syria, and as a result of that we had a very lengthy discussion regarding other areas in Syria that we can continue to work together on to de-escalate the areas,” U.S. Secretary of State Rex Tillerson said Friday, adding that the objectives of the U.S. and Russia in Syria “are exactly the same.”

Unfortunately, Tillerson quickly qualified that statement by insisting the Trump administration still sees “no long-term role for the Assad family or the Assad regime,” effectively keeping regime change on the table.

The ceasefire, which includes cooperation with the Jordanian government, will begin on Sunday, Russian Foreign Minister Sergei Lavrov told reporters. Lavrov said the agreement aims at “securing humanitarian access and setting up contacts between the opposition in the region and a monitoring center that is being established in Jordan’s capital.”

The FM added that an American representative is also scheduled to visit Russia for consultations on resolving the conflict in Ukraine, another contentious outstanding issue between the two powers. In 2014, the United States backed and orchestrated a coup that removed Ukrainian President Viktor Yanukovych in order to install a government in Kiev that is less favorable to Russia.

Perhaps on a less productive note, during Friday’s meeting Trump pressed Putin on the allegation that Russia interfered in the 2016 U.S. presidential election, a claim widely circulated since the race, but never truly substantiated.

“The president pressed President Putin on more than one occasion regarding Russian involvement,” Tillerson said. “The two leaders agreed that this is a substantial hindrance in the ability of us to move the Russian-U.S. relationship forward.”

The United States, for its part, is certainly not innocent when it comes to election interference, including in Russia itself. Much more grave, however, is the American track record of covert regime change operations abroad, over 50 of which have been carried out since the beginning of the Cold War.

While it is important to know if the Russians attempted to throw the 2016 election, the feigned innocence of American officials and media pundits alike regarding the claims against Russia has been nothing short of nauseating.

Tillerson said the two leaders agreed to work toward commitments of “non-interference in the affairs of the United States and our democratic process as well as those in other countries,” seemingly oblivious of the fact that the U.S. right now maintains an illegal occupation of Syria, against the will of that country’s elected government, blatantly interfering in the affairs of a foreign country.

Nonetheless, the sit-down looked to be positive on net. By all appearances, despite tension over certain issues, the diplomatic channels remain open and the willingness for dialogue endures between the world’s largest two nuclear arsenals.