You are here: Home / Zero Hedge / Trump On Chicagoland: “Killings Have Reached Epic Proportions…I’m Sending In The Feds!”

He’s been promising to do it for a long time, and now it appears that Trump is finally “sending in the Feds” to help with Chicago’s “crime and killings” which have “reached epic proportions.”

As the Chicago Sun Times noted this morning, Trump’s Federal force will include 20 agents from the U.S. Bureau of Alcohol, Tobacco, Firearms and Explosives and they have been tasked with the mission of solving gun crimes and hunting down gun traffickers in the city.

On Thursday, authorities confirmed that about 20 additional agents with the U.S. Bureau of Alcohol, Tobacco, Firearms and Explosives have been sent to Chicago to combat gun violence here.

The ATF agents are working with about 20 counterparts from the Chicago Police Department and Illinois State Police on a strike force whose mission is to solve shootings and hunt down gun traffickers through ballistics technology.

“The goal is the prosecute as many of these guys as possible federally where they will serve longer prison terms,” said Anthony Riccio, head of the Chicago Police Department’s organized crime unit.

And more from the Times:

The new strike force, with the aid of a specially equipped mobile van that can quickly process bullets and shell casings, is using such hits to build cases against shooters and gun dealers.

“We’ve been doing this all along but now it’s being amped up,” said Dave Coulson, a spokesman for ATF in Chicago. “It’s a more concerted effort.”

Riccio said the strike force, which officially began on June 1, has developed a “bunch of leads” so far.

One 9mm gun has been linked to 28 shootings, including several murders, on the West Side, Riccio said.

The strike force has also linked 14 different assault rifles to a spate of gang-related shootings on the Southwest Side, Riccio said.

Of course, Trump has talked about “sending in the Feds” several times over the past year with the most recent tweet coming just after he moved into the White House.

Unfortunately, the murder stats have only gotten worse since then. So far, through June 28th, there have been 333 murders in the city of Chicago and 1,753 shootings (charts per HeyJackAss!).

Not surprisingly, the most homicides have come from Chicago’s violent South and West Side neighborhoods. 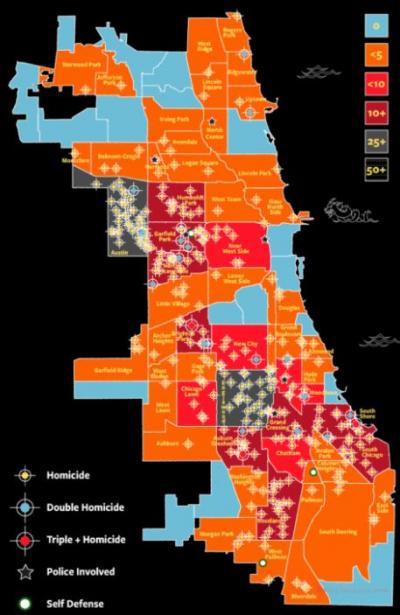 Of course, Trumps’ approach to fixing Chicago’s violence seems to be slightly different than that of the Obama administration which simply chose to write an eloquent report blasting Chicago’s police as “racist” and “brutal” thugs.

We’re curious to see which approach will prove more effective.