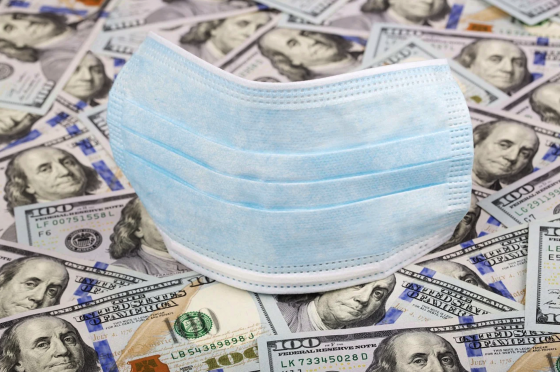 Approximately ten million Americans have filed new claims for unemployment benefits over the past two weeks. To put that in perspective, the all-time record for a single week before this coronavirus pandemic hit was just 695,000. So needless to say, 6.6 million claims in a single week puts us in uncharted territory. Just check out this chart. We have never seen a week like this before, and we may never see a week quite this bad again. Of course millions more jobs will be lost in the months ahead as this pandemic stretches on, but it is hard to imagine another spike like we just had. When you add the last two weeks together, somewhere around 10 million Americans have filed new unemployment claims during that time period…

The torrent of Americans filing for unemployment insurance skyrocketed last week as more than 6.6 million new claims were filed, the Labor Department reported Thursday. That brings to 10 million the total Americans who filed over the past two weeks.

Economists surveyed by Dow Jones had expected 3.1 million for last week, one week after 3.3 million filings in the first wave of what has been a record-shattering swelling of the jobless ranks. The previous week’s total was revised higher by 24,000.

As I have documented repeatedly in my articles, survey after survey has shown that most Americans were living paycheck to paycheck even during the “good times”.

Now that those paychecks aren’t coming in anymore for millions of Americans, a lot of bills aren’t going to get paid.

Just like we witnessed in 2008, mortgage defaults are about to skyrocket, and Wall Street is bracing for the worst…

Borrowers who lost income from the coronavirus, which is already a skyrocketing number as the 10 million new jobless claims in the past two weeks attests, can ask to skip payments for as many as 180 days at a time on federally backed mortgages, and avoid penalties and a hit to their credit scores. But as Bloomberg notes, it’s not a payment holiday and eventually homeowners they’ll have to make it all up.

According to estimates by Moody’s Analytics chief economist Mark Zandi, as many as 30% of Americans with home loans – about 15 million households – could stop paying if the U.S. economy remains closed through the summer or beyond.

As I noted yesterday, the St. Louis Fed expects the unemployment rate to eventually hit 32 percent. That won’t happen immediately, but if we do get there it will be worse than anything that we witnessed during the Great Depression of the 1930s.

Because of all the shutdowns that have been instituted nationwide, economic activity has already dropped to levels that we have never seen before in our entire history.

Personally, I was absolutely astounded when the latest box office numbers were released…

And even once all the “shelter-in-place” orders have finally been lifted, a substantial portion of the population will not want to go to movie theaters anymore due to fear of catching the virus.

Many movie theaters that have closed down will simply never open up again.

Another thing that has really surprised me is how rapidly many Americans have run out of food. A Daily Mail article that documented a line of vehicles a half mile long at a church in Orlando that was giving out food received a lot of attention today…

Today, the hundreds of families flocking to a church parking lot across town from Orlando’s iconic resorts and theme parks are here for a starkly different reason: survival.

‘In the amusement parks, the purpose or the outcome is about having joy or a thrill,’ says mom-of-three Glenda Hernandez, winding down her window to speak with a DailyMail.com reporter.

‘This is about having a child’s belly full for the night or the next couple of nights on whatever they give us.’

How is it possible that so many families are out of food already?

And apparently charities and food banks all over the country are seeing similar surges in demand. Here are just a few examples that were shared by the Guardian…

If things are this bad already, how much worse will the suffering be a month or two down the road?

Meanwhile, U.S. farmers are facing problems of their own.

Because of all the shutdowns, it has been difficult for farmers to get enough workers into their fields. The following comes from CNN…

April and May are critical planting and harvesting times for many US farmers. They need skilled laborers to work their fields, and a reliable supply chain to deliver their goods. And they don’t have any time to waste.

If farmers can’t find enough workers or if their farming practices are disrupted because of the pandemic, Americans could have less or pricier food this summer. And because international farmers and their supply chains face similar problems, we could receive fewer food imports, potentially limiting supply and driving up prices.

Of course the main thing that is going to drive up prices is the fact that the system is being absolutely flooded with new money. Many Americans have applauded the recent moves by the Federal Reserve, and just about everyone seems thrilled that big government checks are coming, but they won’t be so thrilled when a loaf of bread costs five dollars and a gallon of milk costs ten dollars.

As the virus spreads, many are concerned that it will sweep through low wage communities particularly hard, and that is a huge problem because low wage workers are absolutely vital all along the food chain…

By law, food manufacturers must prevent anyone who is sick or has a communicable disease from handling, processing or preparing food for human consumption. But much of the food supply chain is staffed by low-wage workers, many of them undocumented immigrants with limited ties to health services.

So what are we going to do if there are not enough healthy workers to get our food from the farms to our dinner tables?

Already, confirmed cases are starting to pop up at quite a few food production facilities…

The first case of a worker at a major U.S. meat producer testing positive for the virus was reported last week at poultry giant Sanderson Farms Inc. Since then, infections have cropped up everywhere from JBS SA plants in Iowa to Harmony Beef in Alberta.

While scattered factories have closed temporarily or cut output, generally companies are keeping plants running when workers get sick. Rather than shutting entire plants, they’ve focused on identifying areas where infected people have had direct contact.

Fear of the coronavirus is going to paralyze even “essential” industries such as food production.

We are now being told that authorities hope that cases peak in April and that this crisis will hopefully be behind us by June. Let us pray that is true, but what most Americans don’t realize is that this pandemic is just the beginning.

Even before any of us ever heard of “COVID-19”, our world was already descending into madness, but now this pandemic has certainly accelerated things.

Millions of Americans have already lost their jobs, and the days ahead are going to be exceedingly challenging.

This is what an economic collapse looks like, and it is just getting started.