By Francesco Filia of Fasanara Capital

How Bad a Damage If Volatility Rises: The Bear Trap of Short Vol ETFs

As if there was any need for any more threats to financial stability in a world overburdened with debt facing rising interest rates on bubble valuations in both bonds and equities, within an environment dominated by economic policy shifts and political gridlock, there is a potential bear trap right in today’s most fashionable investment products, which risks deflating fast: Short Vol Exchange-Traded Notes and, more broadly, volatility-driven investment vehicles. In this note we will discuss briefly the former. A full analysis and access to our data room is available upon request.

Years of Central Banks’ hyper-activism, financial repression and regular bail-out of financial assets led to a collapse in volatility, and the ensuing investment mania in volatility-driven strategies: risk parity funds in primis, vol-levers of all types, but also exchange-traded notes directly linked to volatility. Among these, Short Vol ETFs have grown relentlessly, oftentimes including leveraged plays, oftentimes sold to retail, fully or partially un-aware of how quick wipe-out-type risks can materialize on such products, and how close we got to such wipe-out risks. For the purposes of our scenario analysis, we will define a wipe-out risk as one of losing more than 75% of the original investment.

We find that the total size for vol-linked ETFs, after leverage and Beta-adjusted is almost $40bn.

The conventional wisdom goes that VIX has never historically moved up so much and for so long as to wipe-out short vol strategies. It would typically require a doubling up of VIX in short order, which has never occurred on a daily basis across modern history.

However, as VIX drags itself around rock-bottom historical levels, often at sub 10-levels, while equity valuations are the highest in history, the risk of volatility doubling up is today materially higher than it has ever been. If VIX was at 20, to double up it would have to move to 40: a statistical outlier. But VIX trades around 9/10 now, from where doubling up simply takes it to 18/20 territory, which is actually spot on the average for VIX on recorded history since 1993 (while median is 15.95). VIX was actually higher than that 30% of the times. If and when it happens, such ETFs would suffer dramatic losses. For wider moves than that, some of the volatility-linked instruments would be almost wiped-out. In others, where a short-vol position can easily be extracted by shorting a leveraged long-vol exchange-traded note, the investor would stand to lose up to 650% of the capital invested.

It is one thing for short-vol ETF to be exposed to rising levels of volatility up to the point where they face wipe-out event risk. Any investment can go sour, and even very badly so. It is quite another for such small moves in volatility to be enough to trigger a wipe-out event. What strikes is then how close we drifted to the cliff, thus with how big a probability it will happen at some point down the line. Indeed, doubling up from where volatility stands now is easy, and simply means moving towards historical averages.

We performed an analysis on some of the largest notes linked to volatility, both from an historical perspective (Regression Analysis) and taking into account the sensitivity of the specific note (Formulaic Analysis). Our analysis shows that if VIX goes from 9.60 to 18/20 in absolute values (it was approx. 40 as recently as Aug2015), and stays there for 8 / 10 days in backwardation, VIX-based ETFs may stand to lose up to 55%. Short positions on long-vol ETFs can then lose up to 250% of capital with VIX at 20. Losses are higher in case of wider backwardation of the term structure of the VIX (i.e. front contracts trading higher than back contracts), or the longer VIX stays elevated while in backwardation, or clearly the higher it goes. For example, if VIX quadruples from here to 40, losses on a UVXY position would amount to a staggering 656%!

Additional risks arise as ‘liquidity gates’ may be imposed, even in the absence of a spike in volatility. In 2012, for example, the price of TVIX ETN fell 60% in two days, despite relatively benign trading conditions elsewhere in the market. The reason was that the promoter of the volatility-linked note announced that it temporarily suspended further issuances of the ETN due to “internal limits” reached on the size of the ETNs. Furthermore, for some of the volatility-linked notes, the prospectus foresee the possibility of ‘termination events’: for example, for XIV ETF a termination event is triggered if the daily percentage drop exceeds 80%. Then a full wipe-out is avoided insofar as it is preceded by a game-over event.

The reaction of the investor base at play – often retail – holds the potential to create cascading effects and to send shockwaves to the market at large. This likely is a blind spot for markets.

To be sure, low volatility has further ramifications above and beyond short-vol exchange-traded notes. An artificially low volatility environment, generated by the passive flows of Central Banks (in excess of $300bn per month at present) and rule-based investing vehicles (we count almost $8trn at play today between risk-parity, vol-levers, ETFs, passive index funds), breeds market fragility. It may well represent the calm before the storm. A state of persistently low volatility offers the fiction of innocuous, ever-trending markets, which entices new swathes of unfitting investors in, mostly retail-type ‘weak hands’. Weak hands are investors who are brought to like an investment by certain characteristics which are uncommon to the specific investment itself, such as its featuring of a low volatility. It is in this form that we see bond-like investors looking at the stock market for yield pick-up purposes, magnetized by levels of realized volatility similar to what fixed income used to provide with during the Great Moderation. Weak hands investors are the first to leave should the low-volatility regime shift gear, adding to the fragility of the market. We discussed it here.

Market fragility must surely be a concern in the current investing environment. Yet, the psychological damage on investors and their behavioral reaction function to a sudden risk-off environment can never be as certain and direct as a wipe-out risk to a whole cluster of them. That is the nature of the risk that short-vol vehicles are facing today.

A synopsis of the data analysis follows below.

Frequency of VIX at different levels: 30% of the times in the last 25 years VIX printed above 20 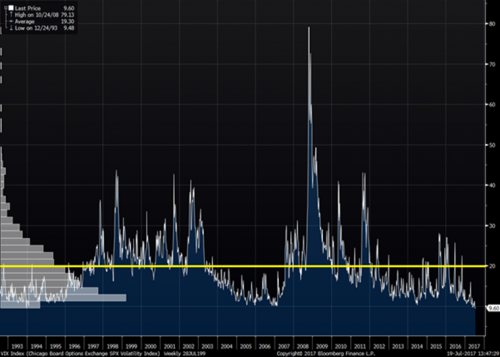 Extreme returns on VIX are more frequent than a normal distribution would project, as confirmed by the Shapiro-Wilk reject of the null hypothesis of normality. A cursory look at the shape of the returns distribution of VIX shows high Leptokurtosis. This is reflected in the frequency with which VIX has doubled up, in a window of just 14 days: 6 times in the last 9 years. 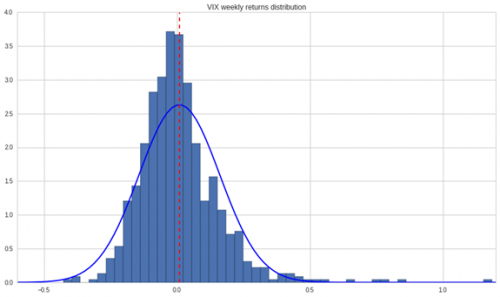 Losses can compound fast for moves in VIX which are both relatively small and frequent in history. According to both an historical and a formulaic analysis, Vix at 20 implies losses up to ~280% across instruments, depending on the shape of the term structure (contango vs backwardation) and how long a period the drift and shape are sustained for. 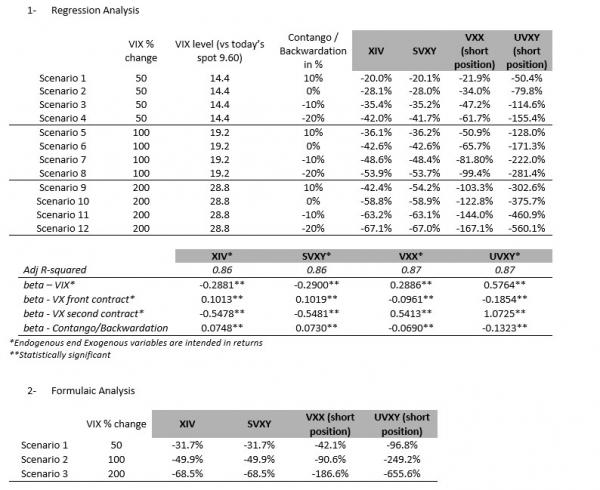 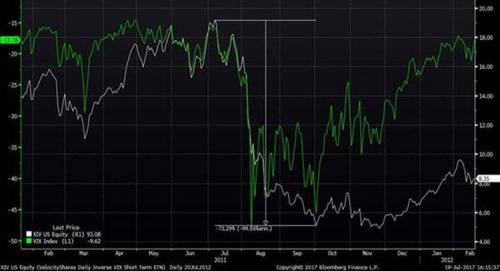 During August 2015 VIX climbed from 12 to 40 in just a few days, on fears of China’s devaluation. A short-vol position in UXVY (short the note) would have lost 100% of its capital already as VIX traded at just 25. It ended up losing 270% as VIX was nearing 40.

UVXY is a leveraged instrument, but unlevered short volatility strategies can have large swings too. During May 2010, a short-vol position in VXX ETN would have experienced a loss of 82% of the capital.