You are here: Home / The Economic Collapse Blog / The United States Has Become A Nation Of Sheeple 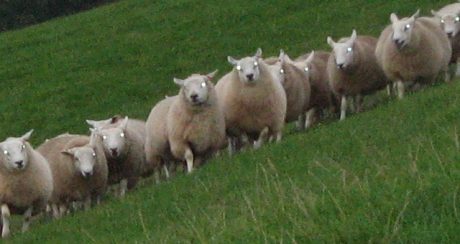 You can either follow the herd of you can decide to find your own path. One of the things that greatly frustrates me is that so many Americans allow other people to do their thinking for them. We have become a nation of sheeple, and the vast majority of the shepherds that we are relying on for guidance are frauds and imposters. The blind are leading the blind, and we are slowly but surely committing national suicide. If a lot more of us don’t start to learn to think for ourselves, I fear that the vast majority of the population will never wake up until it is far too late.

Let me ask you a very simple question.

What is on your mind today?

If you are not preoccupied with work or with family matters, then you are probably thinking about something that you have been fed through the mainstream media. Just think about this for a few moments. When you are sitting around the dinner table or you are chatting with someone at work, what do you tend to talk about? If you are like most people, many of your conversations will be about something that you saw on the news, a new movie that you just watched, or a sporting event that has just happened.

Most of the time, we believe that certain things are important because someone else has told us that they are important.

And the most prominent voices of all are the six gigantic media corporations that control about 90 percent of the news, information and entertainment that we get through our televisions. I know that statistic is a bit hard to believe, so let me share a little excerpt from a fact checking website called truthorfiction.com…

Six corporations own 90% of news media companies in America.

This claim is true.

News Corp, Disney, Viacom, Time Warner, CBS and Comcast own 90% of the TV stations, radio stations, movies, magazines and newspapers that 277 million Americans rely on for news and entertainment.

Of course those six corporate behemoths are owned by the elite of the world, and that is why “the news” never seems to change very much no matter where you get it.

It is imperative that we understand that everyone has an agenda. Every single movie, television show, documentary and news program is trying to shape how you think. Sadly, many people completely disengage their mental filters once they sit down in front of the television, and they just passively consume whatever “programming” that is offered to them without even thinking twice about where it is coming from.

Earlier today, I discovered that the following story was trending online: “This Calf Looks Suspiciously Like Gene Simmons And People Want Answers”.

Why is that story trending?

Well, the truth is that at some point a big media gatekeeper somewhere decided that this is something that we should all be focusing on.

But of course there are thousands of pressing issues that would be far more worthy of our attention. The key is to keep us all confused and distracted so that we can never focus on what is truly important.

One of the biggest reasons why we are so easily controlled as a society is because our system of public education does not teach critical thinking skills to our young people. Instead, most educational time is spent on trying to memorize facts and figures that can be regurgitated when it is time to take a test. And any time that is spent on the “why questions” is usually spent forcing “progressive values” down the throats of our students. No wonder our young people are rapidly falling behind the rest of the industrialized world.

Did you ever see the big Hollywood film that was entitled “Idiocracy“? Sometimes I feel like I am permanently trapped inside that movie. If you ask people why they do the things that they do on a daily basis, most of them cannot give you a coherent answer.

I am even discovering that this is true in the world of politics. I have been asking people who they are planning to vote for in different races here in Idaho and why they plan to vote that way. Sadly, most voters cannot give me any sort of a coherent answer. Most of the time people seem to be backing a certain candidate “because that is what everybody else seems to be doing”.

And something that greatly disturbs me is how we tend to put political leaders up on pedestals. If they are on our “team”, we tend to shower them with worship and pretend that they can’t do anything wrong. But if they are on the other team, we tend to throw as much mud as we possibly can.

Instead of being obsessed with personalities, we need to stand on our principles instead. If our leaders do things that are right, then we should praise those actions. But if they do what is wrong, then we should be willing to hold them accountable.

I have been having a number of conversations about “being red-pilled” lately, and if you ever watched “The Matrix” then you know exactly what I am talking about. Most people out there still don’t seem to realize that the world system is built on a pyramid of lies. From a very early age, we are told lie after lie, and once you start to “wake up” one of the first responses is often intense anger.

If you don’t know what I am talking about, I would encourage you to start questioning everything. Once you really start digging, you will quickly discover that many of the “truths” that society takes for granted are not actually so solid after all.

If you seek the truth with all of your heart, you will find it, and it will set you free.

But breaking free of the programming that the world system is constantly feeding us is the first step, and that is not always easy to do.