You are here: Home / SHTF Plan / The U.S. Government Creates and Exacerbates the Nuclear Threat 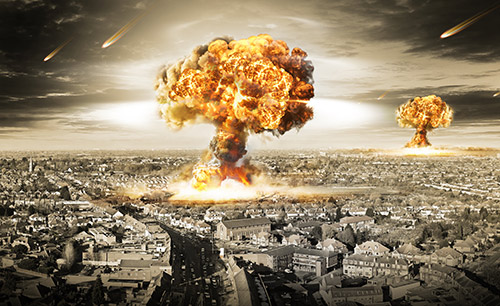 1. North Korea can strike the U.S. with an EMP (Electromagnetic Pulse) attack and/or nuclear missiles, yet:

2. The United States government, through the current and prior two administrations has set the stage for this…as either:

There is an American oligarchy. The oligarchy is not only made up of business and industrial magnates, but of politicos and religious leaders. The business magnates need the lawmakers and politicos to give them “carte blanche” with tax breaks and incentives such as government contracts. The system needs the general populace (or the “proletariat”) to pay taxes and “grunt” out spending on consumer goods and services that keeps the whole thing intact. As in the movie “THX-1138,” there must be periods to pay the utilities, pay for the food, pay taxes on gasoline, taxes on property, taxes on consumer goods, yearly tax increases, and insurances…health, automobile, homeowner…required insurances…

…that ensure the consumer is strapped and shackled to the endless treadmill…where there is no getting ahead…. a new holiday every month to get rid of more of that disposable income for in gifts, travel, and heartfelt largesse…a maelstrom of “emoticons” that condition every purchase….

This is the system we’re in. The problem is, as Americans, what do we do? Roll over and allow ourselves to be taken? To be destroyed as a nation or a people for the fact that our government is not what it was originally intended to be?

I ask for you, the readers to understand my point and stance. I know the government is corrupt and harmful to the citizenry, and has been cancerous to the international community for decades. Yet, this is where we live. Do you remember the original “Red Dawn” movie, where the Soviet was taken prisoner, and Swayze was about to kill him? Swayze was asked what was the difference between them (the Soviets) and us. Swayze responded with, “Because we live here,” and then executed the Russian.

We the people are at fault for not putting a stop to this decades ago. We do not have representatives: we have self-serving politicos in bed with the oligarchs who are trying to do a few things together.

Namely, to amass and secure wealth, assets, materials, and chosen manpower, and then rid themselves of 90% of the populace…and move into a global governance where they rule over slaves whose lifespans are dependent upon their obedience and productive (utilitarian) function.

There is a book entitled “Rogue State” by William Blum that is worth reading if you want the “up and skinny” on American Imperialism. Here is an excerpt that was applicable both yesterday (it was written in 2005) and today:

The BRICS (Brazil, Russia, India, China, and South Africa) nations are currently working to encourage the world to abandon the petrodollar, and Russia and China are little by little advancing the return to the gold standard. China is going to back the Yuan with gold and run an exchange for oil. All of this “sticks in the craw” of the United States and the Western Financial, Political, and Military Hegemony. Iran, Venezuela, and North Korea are not members of this hegemony. American imperialism is clear, and it is enabled by the complacent, stultified public that has been conditioned to believe in American exceptionalism while keyed into a patriotic fervor when a prompted event occurs where such a fervor is in the interests of national objectives.

All that is happening currently falls in line with this. Two excerpts for your learned perusals. The first quotes none other than H.R. McMaster, the former three-star and globalist who slipped into the position of President Trump’s National Security Advisor after railroading K.T. McFarland. This is from the Daily Mail article entitled “Kim is getting closer and there’s not much time left,” from 12/2/17 by Matthew Wright:

“President Trump’s national security adviser HR McMaster said on Saturday that each missile launch from North Korea increases the possibility of war. ‘There are ways to address this problem short of armed conflict, but it is a race because he’s getting closer and closer and there’s not much time left.’ And Kim Jong Un’s nuclear ambitions are the gravest national security threat that America faces, according to McMaster. ‘The greatest immediate threat to the United States and to the world is the threat posed by the rogue regime in North Korea and his continued efforts to develop a long range nuclear capability,’ he added.”

So, McMaster termed North Korea as “the greatest immediate threat to the United States and the world.” If that is the case, then why this? Read this next excerpt from Reuters entitled “Exclusive: Pentagon evaluating U.S. West Coast missile defense sites – officials,” by Mike Stone from 12/2/17:

“On Wednesday, North Korea tested a new type of intercontinental ballistic missile (ICBM) that can fly over 13,000 km (8,080 miles), placing Washington within target range, South Korea said on Friday. Congressman Mike Rogers, who sits on the House Armed Services Committee and chairs the Strategic Forces Subcommittee which oversees missile defense, said the Missile Defense Agency (MDA), was aiming to install extra defenses at West Coast sites. The funding for the system does not appear in the 2018 defense budget plan indicating potential deployment is further off.

“It’s just a matter of the location, and the MDA making a recommendation as to which site meets their criteria for location, but also the environmental impact,” the Alabama Congressman and Republican told Reuters during an interview on the sidelines of the annual Reagan National Defense Forum in southern California. When asked about the plan, MDA Deputy Director Rear Admiral Jon Hill‎ said in a statement: “The Missile Defense Agency has received no tasking to site the Terminal High Altitude Air Defense System on the West Coast.” The MDA is a unit of the U.S. Defense Department. Congressman Rogers did not reveal the exact locations the agency is considering but said several sites are “competing” for the missile defense installations.

Rogers and Congressman Adam Smith, a Democrat representing the 9th District of Washington, said the government was considering installing the THAAD anti-missile system made by aerospace giant Lockheed Martin Corp, at west coast sites. The Congressmen said the number of sites that may ultimately be deployed had yet to be determined. THAAD is a ground-based regional missile defense system designed to shoot down short-, medium- and intermediate-range ballistic missiles and takes only a matter of weeks to install. In addition to the two THAAD systems deployed in South Korea and Guam in the Pacific, the U.S. has seven other THAAD systems. While some of the existing missiles are based in Fort Bliss, Texas, the system is highly mobile and current locations are not disclosed. A Lockheed Martin representative declined to comment on specific THAAD deployments, but added that the company “is ready to support the Missile Defense Agency and the United States government in their ballistic missile defense efforts.” He added that testing and deployment of assets is a government decision.”

There you have the inconsistency that lends itself to understanding of the complete…and true…picture. McMaster parrots the lines of the immediate threat of North Korea to the United States…chiming in, and “to the world,” to bring in thought common among the primates…the whole “troupe” of baboons is at risk. There’s the basis for justification for a U.S. first strike…protecting the community of nations, partners, “comrades,” etc.

But the true “Art of the Deal” is to follow the money generated by the public apprehension worked up through the government and media reports. The money? Where are the missile defense systems going to be located? And who will pay for them? And when will the government decide?

So, Congressman Mike Rogers of Alabama is working on identifying the role of the MDA and government-selected locations, as well as Adam Smith, 9th District Democrat congressman out of Washington. Rogers said several sites were “competing” for the missile defense installations. Also, “friendly” Lockheed Martin said they are “ready to support the MDA and the United States government in their ballistic missile defense efforts.”

Isn’t that wonderful, and wondrous? The article mentions the decision wouldn’t be made until sometime in 2018. What a sense of urgency for an imminent attack that is!

What it all really means is they still need to figure out a method for leasing property and racking up expenses ten times the actual cost…so that Rogers, Smith, and all the other politicos can line their pockets and steal the excess, as well as grease the palms of a small army of municipal commissars and apparatchiks. Then…here comes the benevolent Lockheed Martin, a “mom-and-pop” store that is just awaiting governmental approval and decisions to help everyone out…all funded by the stupid American taxpayer. The corporation and the government, hand in hand to protect the little taxpayer serfs!

And if the nuclear missile bypasses THAAD and Aegis (that we already know will not perform), oh well! Responsibility and accountability are two different things. Besides, everyone will be mad enough that nobody will notice those last-minute wire transfers of funds and stocks into hard gold and silver overseas, nor the scrambling of the politicos and executives to ensure they are out of the country or safe in funded bunkers when it commences.

No, the problem is we as citizens are on the outside looking in. North Korea has the capability to hit us and kill millions of people. The truth is that we will prod them into doing it, for one scenario or another as outlined in the beginning of this article. Trust them: you can trust in the politicians in all their narcissistic hubris armed with aggression and impunity and shielded in self-righteousness. You can trust in them to initiate a nuclear war, but don’t worry. They will be safe, sound, and underground in a secure location that you paid for, while you’re barbequing up above.

The next world war will be initiated by an EMP attack against the U.S., followed by a nuclear exchange and then conventional warfare. Whether another country initiates it, or we do is another matter that will probably never be ascertained after it happens.