You are here: Home / End Of The American Dream / The Supreme Court Just Gave Away Half Of The State Of Oklahoma
FacebookTwitterSubscribe 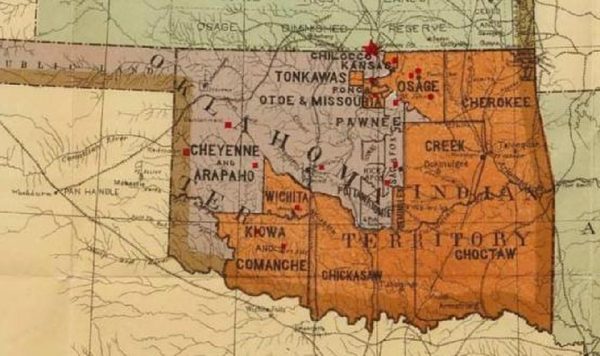 The stunning Supreme Court decision regarding Donald Trump’s tax records is making headlines all over the globe, and this is causing a far more important Supreme Court decision to fly under the radar. In a 5-4 decision written by Neil Gorsuch and joined by four of the other liberal justices, the U.S. Supreme Court ruled that about half of the state of Oklahoma belongs to Native American tribes even though the state of Oklahoma has “maintained unquestioned jurisdiction” over that land for more than 100 years. In other words, there are now approximately 1.8 million former Oklahoma residents that suddenly live on land that no longer belongs to Oklahoma. And now that the Supreme Court has handed down this ruling, there will be countless other Native American tribes that will be going to court with claims of sovereignty which will need to be resolved.

Do you remember the big rally that President Trump held in Tulsa, Oklahoma not too long ago?

Well, it turns out that the state of Oklahoma no longer has sovereignty over that area. The following comes from a CNBC article entitled “Supreme Court says eastern half of Oklahoma is Native American land”…

The 5-4 decision, with an opinion authored by Justice Neil Gorsuch, endorsed the claim of the Muscogee (Creek) Nation to the land, which encompasses 3 million acres in eastern Oklahoma, including most of the city of Tulsa.

I cannot even begin to describe how disastrous this decision is, and this is what we get for appointing so many radical leftists to the highest court in the land.

The case concerned an appeal from Jimcy McGirt, a Native American, who claimed his state rape conviction from 1997 should be overturned because Oklahoma lacked jurisdiction. Congress, his lawyer Ian Gershengorn said, never properly terminated the reservation.

During oral arguments in May, the justices reached back to 1907 to determine whether Congress, using imprecise language, failed to disestablish the 1866 boundaries of the reservation.

“On the far end of the Trail of Tears was a promise,” the conservative justice wrote. “Forced to leave their ancestral lands in Georgia and Alabama, the Creek Nation received assurances that their new lands in the West would be secure forever.”

Even though Chief Justice John Roberts has sided with other liberal justices on the Court repeatedly in recent years, it was so obvious that the prior claims that Native American tribes had to these lands were extinguished that he felt compelled to side with the conservatives in this case. In a dissent, Roberts explained why the ruling of the majority in this case is completely and utterly absurd…

“A century of practice confirms that the Five Tribes’ prior domains were extinguished,” wrote Roberts. “The State has maintained unquestioned jurisdiction for more than 100 years. Tribe members make up less than 10%–15% of the population of their former domain, and until a few years ago the Creek Nation itself acknowledged that it no longer possessed the reservation the Court discovers today.”

For once, Roberts is right on the money.

The Supreme Court has turned back the clock more than 100 years, and as the government of Oklahoma has noted, this decision essentially cuts their state “in half”…

The state said that if the Supreme Court accepted McGirt’s reasoning it would “cause the largest judicial abrogation of state sovereignty in American history, cleaving Oklahoma in half.”

If you live in the state, you should be aware that things are about to get a whole lot more dangerous.

According to the state’s solicitor general, this decision is likely to “require the release of more than 1,700 inmates”…

The state’s solicitor general, Mithun Mansinghani, had warned in May that a ruling for Native Americans could require the release of more than 1,700 inmates. That didn’t sit well with several justices who feared a chaotic overhaul of long-decided criminal cases.

Of course Congress could transfer sovereignty over those areas back to the state of Oklahoma by formally disestablishing the reservations on Oklahoma land, but with Democrats in control of the House of Representatives there is zero chance of that happening at this point.

So for the foreseeable future, 1.8 million people in eastern Oklahoma are stuck in a really bizarre situation. The state of Oklahoma no longer has jurisdiction over them, but the five Native American tribes that have now been given jurisdiction are completely unequipped to exercise sovereignty over those areas because they haven’t done it in more than 100 years.

“We do not pretend to foretell the future, and we proceed well aware of the potential for cost and conflict around jurisdictional boundaries, especially ones that have gone unappreciated for so long,” Gorsuch wrote. “But it is unclear why pessimism should rule the day. With the passage of time, Oklahoma and its Tribes have proven they can work successfully together as partners.”

This is yet another example that shows that Supreme Court appointments must be handled with extreme care.

Republicans have nominated 14 of the last 18 Supreme Court justices, and yet right now there are 7 liberals on the Court and only two conservatives.

And yes, I am counting correctly.

At this point only Clarence Thomas and Samuel Alito can be considered “conservative” justices, and both of them are quite elderly.

What this means is that there is very little hope of reversing the string of horrible Supreme Court decisions that we have seen over the last 50 years, and it is extremely likely that we will continue to see an endless series of bad decisions in the years ahead.

If much more care had been taken to make sure that people that had a tremendous amount of respect for the U.S. Constitution were being appointed to the Supreme Court, this could have all been avoided.

But instead we just went along with whoever was being nominated, and the results have been absolutely disastrous.