You are here: Home / The Economic Collapse Blog / The Oil Price Collapse Is Yet Another Sign That Economic Activity Is Crashing Dramatically All Over The World
ShareTweetSubscribe 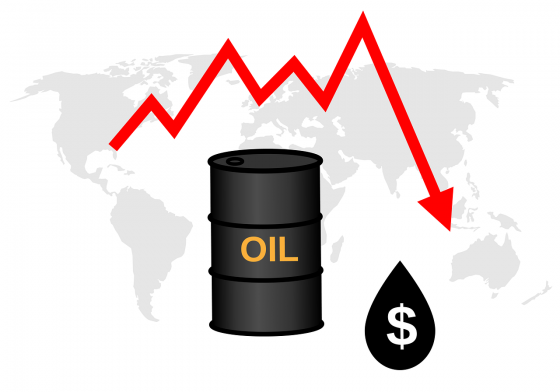 The insanity that we are currently witnessing in the financial markets is difficult to believe. Personally, even though I operate a website called “The Economic Collapse Blog” and I write about these things every day, when someone told me that the price of oil had fallen below minus 30 dollars a barrel on Monday I initially didn’t think that it could possibly be true. Yes, I always knew that it was theoretically possible that the price of oil could go into negative territory, but we had never seen such a thing actually happen before. And I knew that a crunch was coming as futures contracts expired, but I certainly did not expect the extreme carnage that we witnessed on Monday …

West Texas Intermediate crude for May delivery fell more than 100% to settle at negative $37.63 per barrel, meaning producers would pay traders to take the oil off their hands.

This negative price has never happened before for an oil futures contract. Futures contracts trade by the month. The June WTI contract, which expires on May 19, fell about 18% to settle at $20.43 per barrel. This contract, which was more actively traded, is a better reflection of the reality in the oil market. The July contract was roughly 11% lower at $26.18 per barrel.

When global economic activity is rising, that usually creates an increased demand for oil.

And when global economy activity is declining, the demand for oil also tends to drop.

Thanks to the coronavirus lockdowns, global demand for oil has dropped to levels that are absolutely unprecedented. The amount of oil that is being produced is far, far greater than the amount that the world can use right now, and storage space has been rapidly running out.

Speculators that found themselves stuck with oil contracts that they were not able to resell went into panic mode on Monday, and that created the most memorable day for oil trading in history.

I would like to share what a couple of experts are saying about this absolutely crazy oil price crash. This first comment comes from Wolf Richter…

It seems some oil trading firms and hedge funds were caught on the wrong side of heavily leveraged bets, and couldn’t roll over their contracts due to a liquidity crunch and horrible market conditions in that space. But if they can’t sell the contracts by tomorrow, they’ll have to take delivery of the physical oil at the delivery point for NYMEX futures, namely in Cushing, Oklahoma.

The delivery time is in May. But storage in Cushing for May seems to have been spoken for, and now these traders see that they have no place to go with this oil that they might have to take delivery of in May.

What is happening today is trades or speculators who had bought the contract are finding themselves unable to resell it, and have no storage booked to get delivered the crude in Cushing, OK, where the delivery is specified in the contract.

This means that all the storage in Cushing is booked, and there is no price they can pay to store it, or they are totally inexperienced in this game and are caught holding a contract they did not understand the full physical aspect of as the time clock expires.

The contract roll and liquidity crunch that made the extreme sell-off today possible but it DOESN’T necessarily represent futures market conditions: NYMEX June settled today at $21.13.

Last week, Russia, Saudi Arabia and other major oil producers cut a deal to significantly reduce global oil production, but it wasn’t nearly enough to match the nightmarish decline in global economic activity that we have been witnessing.

So right now oil producers are pumping far more oil than the world can currently use, and that has become a massive problem.

And if things don’t turn around quickly, we could soon see hundreds of bankruptcies in the energy industry…

Many oil companies took on too much debt during the good times. Some of them won’t be able to survive this historic downturn.

In a $20 oil environment, 533 US oil exploration and production companies will file for bankruptcy by the end of 2021, according to Rystad Energy. At $10, there would be more than 1,100 bankruptcies, Rystad estimates.

In the short-term, what the energy industry desperately needs is for the lockdowns to end and for people to resume their normal economic patterns.

But as one analyst has pointed out, getting people to do that would be extremely difficult even if all of the lockdowns were lifted immediately…

“The government can declare whatever they want in terms of encouraging people to get out and do stuff,” said Willie Delwiche, investment strategist at Baird. “Whether or not broad swaths of society do that remains to be seen. It’s going to take seeing people start to get out and do stuff again. That will be the necessary positive development, not just declaring getting things open.”

In the long run, the good news for the energy industry is that there are several reasons why the price of oil will eventually be going back up to higher levels.

First of all, economic activity will rise as lockdowns are lifted all over the world, and hopefully all of the lockdowns will be over by the end of this calendar year.

Secondly, central banks and national governments around the globe are flooding the system with massive amounts of fresh money, and this will eventually cause very painful inflation. But for the energy industry this will actually turn out to be a good thing because it will cause upward pressure on oil prices.

Thirdly, it is just a matter of time before a major war erupts in the Middle East, and once that happens the price of oil will immediately shoot into the stratosphere.

So the truth is that this is just a temporary downturn for the energy industry, but a lot of energy companies are so deep in debt that they may not be able to ride this storm out.

For the U.S. economy as a whole, it is critical for all of us to understand that things are never going to go back to exactly the way they were before COVID-19 came along. All of the financial dominoes are starting to tumble, all of the economic momentum is heading in the wrong direction, and there will be many more challenges that we will have to face after this current pandemic is over.

There will be a lot more wild ups and downs in the months ahead, but this is what an economic collapse looks like, and it is just getting started.