This article was contributed by James Davis at Future Money Trends. 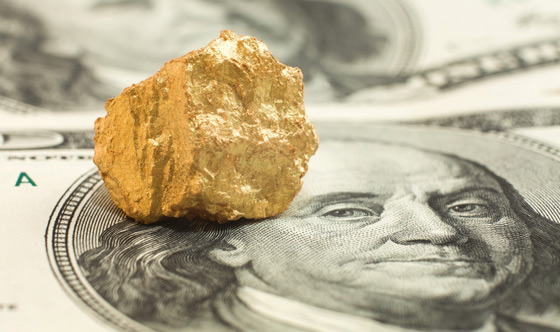 I want to treat what we’re going through AS IF IT WERE WAR since the reaction is no less than that. Even in wartime, quarantines, stay-at-home orders, curfews, and temperature checking measures, as well as mandated vaccines, are CONSIDERED DESPERATE MEASURES and tyrannical policies.

In wartime, all of the resources are focused on WINNING IT. This is exactly what’s happening at the moment. During conflicts, there are casualties, wounded (infected, in this case), frontlines (hospitals, in this case), and UNMATCHED government intervention. In our current era, there is also UNPARALLELED central bank balance sheet expansion.

You can clearly see that even during WW2 when the gold standard was in place, the government will spend when it determines that it NEEDS TO, and the deficits could be QUITE OVERWHELMING.

History is clear that after such OUTRAGEOUS government spending, the public immediately demands a reversion to the mean, which means A RESET – a real one. In 1945, the last time Washington WENT NUTS on public spending, the Bretton Woods agreement came about. 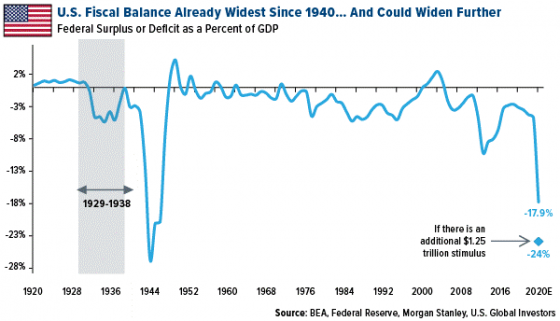 In less than two weeks, the U.S. economy will begin to REOPEN, but it won’t be SIMPLE. Measures such as social distancing, no shopping centers, no gatherings of over 50-100 people, no schools, no international traveling, and other protective restrictions will MAKE A “V”-SHAPED recovery impossible.

This is going to put a seal on higher STOCK PRICES. We saw a lightning-fast bounce in the markets, which are up over 30% since the March lows, but there’s no reason for anyone, sophisticated or rookie, to chase stocks much higher, even if they have a long-term outlook (2 to 5 years).

Reopening while keeping many EMPLOYEES out of work since their industries are DEEMED TOO RISKY, will result in slow recovery and MONETIZED DEBT ISSUANCE.

The uptrend in the gold/equities ratio is CLEAR AS DAY.

The amount of oil that is stored will PUT A LID on prices going forward. I don’t think that $20/barrel is a long-term SUSTAINABLE price, but in the coming months, there’s A SERIOUS GLUT to work through.

Salaries and abundance in workforces will allow companies to retain personnel quickly while keeping margins HIGH.

Nowhere is this advantage of (1) low energy prices and (2) stagnant salaries MORE IMPORTANT than in the commodities sector, where oil and labor are the TWO LARGEST expenses.

Newmont Mining is already the SECOND-BEST performing stock this year in the S&P 500.

Other mining operators are also GENERATING big returns as well. 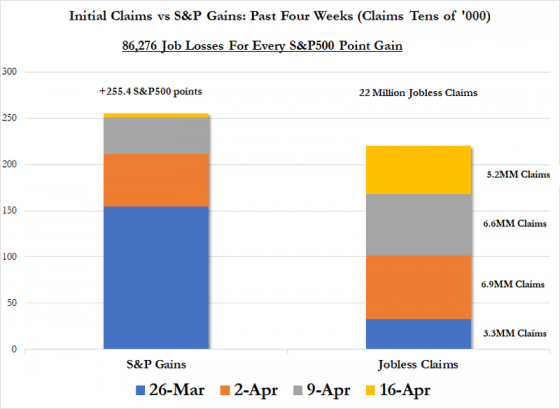 In order to keep the millions of unemployed workers of the airline, casino, cruise line, hotel, restaurant, tourism, clothing, furniture, and other FROZEN industries WHOLE, the government will continue paying larger-than-normal BENEFITS.

More money out the door without increases in productivity is a RECIPE FOR INFLATION if I’ve ever seen one.

Gold might see some headwinds in the coming weeks because so many people moved into the trade in the past few weeks, but it will build the new baseline at around $1,750. From there, we climb to a NEW ALL-TIME HIGH.

Next, infrastructure programs will cause IN-DEFICIT base metals, such as copper, to enjoy ROBUST FUNDAMENTALS.