You are here: Home / The Daily Sheeple / Smoke Fills Horizon in Hamburg as G20 Protests Devolve Into Violent Clashes With Police 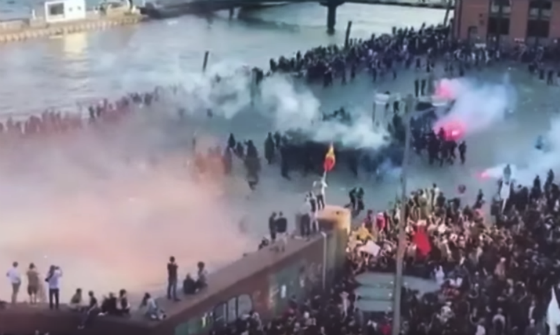 Protests have exploded into violent, chaotic clashes with police in Hamburg, Germany, as the G20 — “Group of 20,” including world leaders, banking executives, and officials from 19 nations and the European Union — meet to discuss global economic and financial issues.

An estimated minimum of 100,000 protesters flocked to Hamburg for the annual conference, and — as has come to be expected — fraught clashes with authorities began almost immediately on Thursday, as police unleashed water cannons, pepper spray, and batons against the massive crowd, leaving dozens of demonstrators and around 160 officers injured. Initial reports say at least 70 people have been arrested.

One group of protesters has vowed to make entry into the actual events of the two-day conference as difficult as possible for powerful attendees — and they appear to have been efficacious — First Lady Melania Trump remained blocked from exiting her hotel to attend events scheduled for the attendees’ spouses.

Images of burning vehicles, massive crowds, and smoke or pepper spray intermittently billowing in the air continue to emanate from Hamburg as the controversial conference continues.

“Hamburg police said one of their helicopters was targeted with a flare that only narrowly missed it. Two police vehicles carrying officers were also attacked, with paint thrown and windows smashed. Bottles and fireworks were flung, injuring some officers, police said.

“The tires of a Canadian delegation car were slashed, police said, although a Canadian official disputed that account.”

Protests and riots generally focus on the intense focus of power and money wielded by the G20 members — a concentration of both representing fully 80 percent of the global gross domestic product — particularly amid an astronomical stratification of wealth now apparent in many Western nations.

While the conference might be carried out under the auspices of cooperation and diplomacy, symbolically, this meeting of the powers-that-be seems more an exercise in perfecting power and control, to many.