You are here: Home / The Economic Collapse Blog / Should Donald Trump Be Time Magazine’s Person Of The Year? 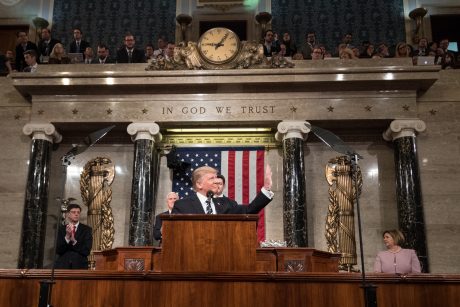 Should Donald Trump be named “Person of the Year” by Time Magazine just like he was last year? This has become the biggest controversy in the mainstream media over the past couple of days, but there really shouldn’t be any controversy at all. According to Time Magazine, the “Person of the Year” is supposed to be “a person (or people) who has had the most influence over the news in the last 12 months.” If that standard is objectively applied, of course Donald Trump would win again, and I can’t think of anyone that would be even close.

And according to President Trump, it appears that Time Magazine was indeed at least considering him for Person of the Year again. On Friday, Trump posted the following message on Twitter…

Time Magazine called to say that I was PROBABLY going to be named “Man (Person) of the Year,” like last year, but I would have to agree to an interview and a major photo shoot. I said probably is no good and took a pass. Thanks anyway!

The President is incorrect about how we choose Person of the Year. TIME does not comment on our choice until publication, which is December 6.

So is there still a possibility that Trump could be Person of the Year?

We’ll see. My guess is that the decision had already been made prior to Trump’s tweet, and if Trump was the choice I think that it would be extremely difficult for Time to switch gears and feature someone else at the last minute.

And I certainly hope that Time Magazine does make Trump the Person of the Year for the second consecutive time, because he very much deserves it. In fact, even CNN says that he deserves it…

Hey, let’s stop debating whether Time magazine formally offered this honor to Trump or not and get to the real issue. Time magazine executives, if you are reading this, Trump deserves to be “Person of the Year.” Hell, Trump should get person of the decade, maybe even the millennium. And I say that as someone who has been a very (very) vocal critic of Trump.

You see, Trump is doing something as president that we have not seen in the modern era — if ever. Most presidents seemingly work non-stop on the business of running the government. It’s an acutely intense and stressful job which no doubt explains why presidents age so dramatically in office. But Trump doesn’t just work at the business of government — he does so, so much more.

First, there’s Trump’s tweeting. On average, Trump tweets six to seven times a day. We are talking over 2,000 tweets since he has been sworn in! And with Twitter now expanding its character limit from 140 characters to 280, that means going forward Trump has double the workload.

You can read the rest of CNN’s snarky article right here.

Of course Trump is likely to be in the running for Person of the Year again in 2018 as well. The 2018 mid-term elections will be all about Trump and his agenda, and that is why it is absolutely imperative that we rally around pro-Trump candidates for Congress.

Personally, I am running as the pro-Trump candidate in Idaho’s first congressional district, and if you are a Trump supporter I hope that you will be part of the team.

And I want to thank my regular readers for their patience. This campaign has already required an immense amount of time, effort and energy, and I haven’t been able to do as much writing as I normally do. We still have about six months more to go until election day, and I am going to work hard to keep posting regular articles, but without a doubt the campaign is going to demand more and more of my time.

This is going to be a very challenging time for my wife and I, and the number one thing that we need right now is prayer. Please be praying for grace and strength, because we have so much on our plate at the moment.

In addition, if you would like to help support our work during this arduous time, one way you can do that is by purchasing copies of my latest book to give out as gifts. “Living A Life That Really Matters” is the most powerful book that I have written, and even applying just a few of the principles that I teach about will dramatically change the course of your life. The following is from the description of the book on Amazon.com…

Deep inside all of us is a yearning to live a life that is filled with meaning and purpose. We all want to feel good about our lives, and we all want something to look forward to when we get out of bed in the morning. As little children we were filled with hopes and dreams for the future, but for so many of us those dreams have long since faded. Instead, many of us drag ourselves through life feeling down, depressed and defeated. In this book Michael Snyder is going to share with you what he has learned about living an overflowing life. We were designed to love, to laugh, to discover, to create and to live lives that are filled with passion. Unfortunately, so many of us have bought into lies that have enabled the enemy to steal all of that from us. No matter how bad things may seem right now, God can take the broken pieces of your life and turn them into a beautiful thing. But you have got to be willing to break your old patterns and start doing things that will produce good fruit in your life. This book will help you to do that.

I want to thank everyone that has supported my work over the years, and I can’t wait to see what happens next. God has a plan for each one of us, and 2018 definitely promises to be one of the most “interesting” years ever.