You are here: Home / End Of The American Dream / Shocking New Online Poll Shows That Michael Snyder’s Campaign For Congress Has A Ton Of Momentum 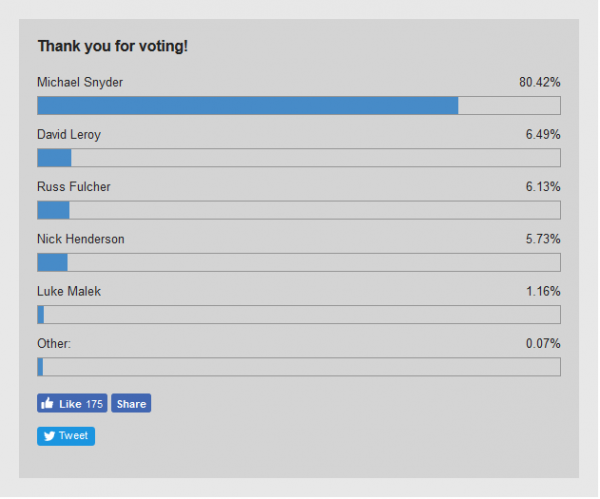 It is still very, very early, but we continue to get positive signs that all of the hard work that we have put into this campaign is getting the attention of the voters. Last week, the largest and most important political talk radio station in the entire state posted an online poll for our race, and we are winning. In fact, we have more votes than all of the other guys in the race combined. But let’s not get too excited. This is an entirely unscientific poll, and a scientific poll would show a much, much closer race. The truth is that most voters in this district still don’t even know who any of the candidates are, and that means that we have a ton of work ahead of us in this wide open race. In order to win, we need to effectively get our message out to all of these voters, and if you would like to help us do that, you can do so right here…

I don’t want anyone to get overconfident because of the results of this online poll. In the end, it is just a test of enthusiasm. Just like all of the other campaigns, we encouraged our supporters to go vote, and the response was overwhelming. Everywhere I go, I have been telling people that we have more enthusiasm for our campaign than any of the other guys by a wide margin, and this online poll is just more evidence that this is true.

But enthusiasm alone won’t be enough to win this race. Online polls are never very accurate, and we understand that. Name recognition for every candidate in this race is still quite low, and so in order to win next May we are going to have to roll up our sleeves and get to work. The path to victory has never been clearer for our campaign than it is now, but it is going to take all of us. We had set a goal of $25,000 for the last week of September, but we didn’t meet that goal. But we did have our best week of fundraising that last week of September, and we ended up raising more money than my chief opponent Dave Leroy did last quarter. The good news is that none of my opponents have raised that much money yet either, but we don’t want them to race out ahead of us this quarter. If you would like to help put “fuel in the tank”, you can contribute right here…

A few days ago we returned from our longest trip of the campaign so far, and so many incredible people all around the district are getting involved in our campaign. The demand for campaign materials continues to grow, and that means that we are starting to run low in a lot of areas. Here are some of the biggest categories of need at the moment…

#1 Brochures – We printed up 10,000 brochures, but now we are literally down to half a box. I will run through those very shortly, and so we need to print up another 10,000. Ultimately, somewhere around 800,000 people are living in this district, and we would love to get our message into as many of their hands as possible.

#2 Bumper Stickers – We printed up 1,000 bumper stickers, and I just gave away the last ones at our event in Garden Valley. We need to print up at least 2,000 more if we can, and we need them as soon as possible.

#3 Signs – The demand for signs has been crazy. Everywhere we go people are asking for signs, and we are doing our best to keep up. We need more yard signs, more two by four signs, and pretty soon we will need more four by eight signs.

#4 Shirts And Hats – We would like to make these widely available for our supporters, because they are great for spreading awareness about our campaign. Unfortunately, so far we have not had the resources to do that. We have been able to get a few shirts and hats to members of our core team, but we would like to get them in the hands of supporters all over the district.

#5 Mailers – One of the best ways to reach voters in this enormous district is through mailers. My opponents are going to spend thousands upon thousands of dollars on mailers, and if they do a better job of getting their message out to the voters we will be in trouble.

If you would like to help fund the resources that we desperately need for this campaign, you can do so here…

Just because we were victorious in one online poll does not mean that we are guaranteed to win this campaign.

Other polls are going to show different results, and scientific polls will show that the vast majority of voters are still completely undecided.

But if we all stand together, and if we work really hard to get our message out to everyone in this district, there is no way that the other guys are going to beat us.

Once again, please don’t let the KIDO online poll fool you. We very much encouraged our people to go vote, and that is really the point of these sorts of online polls. They are more a “test of enthusiasm” than anything else. But without a doubt we are taking this outcome as a positive sign, and in order to keep the momentum going we need your help…

Because there is no incumbent in this race, it is totally wide open, and the team that works the hardest is probably going to win.

So I am asking for your help, because there is no way in the world that I could ever do this by myself.

We are going to work harder than any of the other campaigns, and we are going to make every dollar stretch as far as humanly possible. I want to thank everyone that has volunteered and contributed so far, and I have been blown away by the extraordinary people that have reached out to us because they wanted to get involved in what we are doing.

We are on a mission to take our country back. So instead of spending another 50 dollars on Halloween candy, I would encourage you to consider contributing to the campaign instead. You can learn more about where we stand on the issues right here. We are literally fighting on behalf of our children and our grandchildren, and we are going to do all that we can to make sure that this remains the land of the free and the home of the brave.