You are here: Home / SHTF Plan / ‘Self-Restraint’ Is The Only Thing Between Armistice And Nuclear War With North Korea 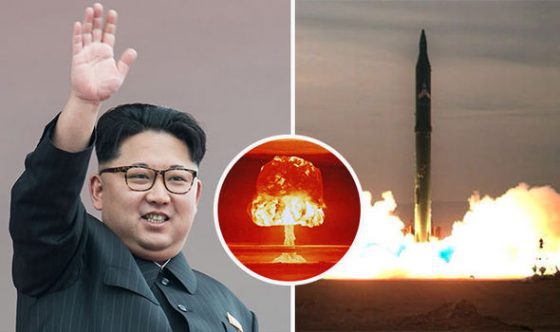 It’s finally happened: Kim Jong-Un has had a successful ICBM (Intercontinental ballistic missile) test. Now that he’s actually improved his battle might and has the capability to strike Alaska, he’s taunting the US president with nuclear war.

A top military official has warned “self-restraint” is the only thing stopping the US from going to war with North Korea. Soon after his successful missile test on the 4th of July, a defiant Kim Jong-Un seemingly taunted “American bas**rds” in the wake of said successful intercontinental ballistic missile test. Pyongyang claims its newly developed rocket can carry “large-sized and heavy nuclear warheads.”

The North Korean leader made the haughty statement, in which he said “the American bas**rds would not be very happy with this gift sent on the July 4 anniversary,” not long after the ICBM was launched Tuesday, the Korean Central News Agency reported.

The successful ICBM, which state media said had reached an altitude of 2,802 kilometers (1,741 miles), was its highest ever missile test, and most successful. State media in Pyongyang said North Korea now had the power to now strike the American mainland with a nuclear warhead. Experts agree, and say that if the missile had been fired on a normal trajectory instead of at a high altitude, it would have reached about 6,000 kilometers, which is enough to put Alaska within range.

In a joint press statement issued by Russia and China, the two countries reiterated their call for North Korea to stop its missile and nuclear tests in exchange for the US and South Korea holding off on future large joint military drills.

However, within hours of the statement, the US and South Korea announced they indeed had held a new ballistic missile drill to counter “North Korea’s destabilizing and unlawful actions.” “(The drills) showcased precision targeting of the enemy’s leadership in case of an emergency,” a South Korean Defense Ministry statement said.Speaking out against Pyongyang on Wednesday, the top American general in South Korea issued an ominous warning of his own to Kim and his ilk north of the border. “Self-restraint, which is a choice, is all that separates armistice and war,” General Vincent Brooks said in a joint statement. But this missile test is leaving the United States with few options, and the nation is split on how they intend to deal with the rogue nation’s new capabilities.

With a seemingly unavoidable war with North Korea on the horizon, joint drills only inch up tensions between the nations choosing to involve themselves. Analysts told CNN there are very few good options for President Trump to deal with the North Korean threat. “A really difficult question will be whether Donald Trump feels like he’s (been) backed into a corner and doesn’t have options short of war,” Adam Mount, senior fellow at the Center for American Progress, told CNN.