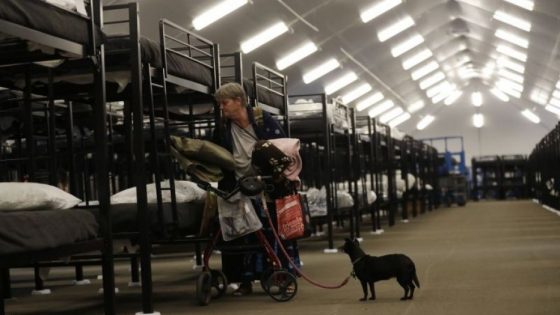 San Diego is desperately trying to control a Hepatitis A outbreak brought on by the homeless problem plaguing the state of California. The city has now opened the first of three giant tents meant to contain the outbreak of the deadly virus.

The first of three industrial-sized tents to house the homeless as part of the city’s efforts to contain a hepatitis A outbreak. The outbreak itself stems from the deplorable conditions people were living in on the streets – mainly, the fecal matter that is left from those who live on the street. Of course, the government isn’t going to climb off the backs of their residents in California, instead, they will continue to raise taxes and create more homeless people while desperately and frantically trying to stop the problems that their overbearing government has caused.

About 20 people made their way to a bunk bed Friday in the tent that will house 350 single men and women. Two other giant tents will open later this month — one specifically for families and one for veterans. The tents will house a total of 700 people with an attempt to keep them from defecating on the street and spreading the Hepatitis A virus.

More than 3000 people are homeless in San Diego, and risk contracting the disease which has killed 20 people so far. The city had to divert $6.5 million budgeted for permanent housing to fund the operation of the tents for seven months. The tents will provide an array of services from mental health care to housing navigators. But the city still faces an acute housing shortage for the poor. Faulconer has earmarked more than $80 million in stolen (taxpayer) funds to address the problem. So the city wants to fix poverty by taking more from earners and creating more poverty. Bravo, California.

Local residents are concerned that the homeless will simply bring their disease with them. Gemma Librado lives a block away from the tent that opened Friday. Last Sunday, a homeless man high on drugs and with a bleeding hand ran into her apartment when she opened the door and locked himself in her bathroom. She and her 6-year-old son ran out of the apartment and called the police. The man broke things in her bathroom, left bloodstains on her floor, and scared her and her child. “If this makes things more orderly than I support this,” she said. “But I’m worried. I don’t want this to bring in more homeless to the area and people using drugs. There are families with children around here.”