You are here: Home / SHTF Plan / Russia Unveils The Future Of Warfare, And It’s A “Fully Automated Combat Module” That Can Identify Targets On Its Own 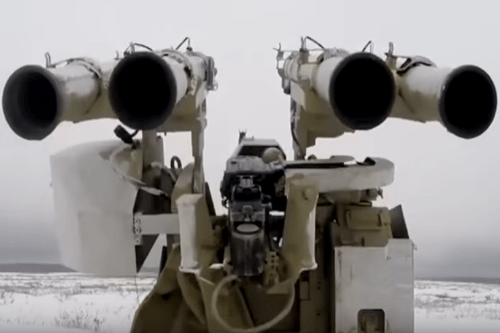 For decades the US military has been on the cutting edge of aerial warfare, especially when it comes to drones. Our military has thousands of UAVs which have become ubiquitous in every American war since 9/11. However, they’ve proven to be a mixed bag. They have certainly given our soldiers an edge on the battlefield, but they’ve also killed thousands of civilians, which in turn has motivated countless individuals to take up arms against us. Regardless, there’s no doubt that drones are here to stay, and will be a common sight on the battlefield well into the future.

But as our military continues to develop UAVs, our government’s rivals in Russia seem to have taken a different path when it comes to automated and remote control war machines. Their own military-industrial complex seems to have placed less emphasis on aerial drones, and more emphasis on land based drones. Last year a Russian company unveiled a remote control tank called the Uran-9, which at the time was expected to be sold on the international market.

Truth be told, Russia has been working on these sorts of weapons for a long time. At least as far back as 2014, Russia’s Defense Ministry was considering the deployment of mobile security robots to protect missile facilities. But in comparison, their latest land based drones are significantly more advanced. Recently the Kalashnikov Group (who are currently the largest arms manufacturer in Russia), produced an armed robot that isn’t just a remote controlled gun. Supposedly, it has artificial intelligence that can actually identify targets on its own. According to Defense One:

The maker of the famous AK-47 rifle is building “a range of products based on neural networks,” including a “fully automated combat module” that can identify and shoot at its targets. That’s what Kalashnikov spokeswoman Sofiya Ivanova toldTASS, a Russian government information agency last week. It’s the latest illustration of how the U.S. and Russia differ as they develop artificial intelligence and robotics for warfare.

The Kalashnikov “combat module” will consist of a gun connected to a console that constantly crunches image data “to identify targets and make decisions,” Ivanova told TASS. A Kalashnikov photo that ran with the TASS piece showed a turret-mounted weapon that appeared to fire rounds of 25mm or so.

Kalashnikov did not respond to a request for comment before press time.

Another difference between the US military and the Russian military, is that the Russians have a different view on what role these machines should play on the battlefield. Unlike the US military, the Russians seem far more comfortable with the idea of drones that make their own decisions, and leave humans out of the loop.

Russia’s willingness to embrace lethal autonomy stands in stark contrast to U.S. policy. In 2012, then-Deputy Defense Secretary Ash Carter (later defense secretary) signed a directive forbidding the U.S. to allow any robot or machine to take lethal action without the supervision of a human operator.

In 2015, then-Deputy Defense Secretary Bob Work said fully automated killing machines were un-American. “I will make a hypothesis: that authoritarian regimes who believe people are weaknesses,” he said, “that they cannot be trusted, they will naturally gravitate toward totally automated solutions. Why do I know that? Because that is exactly the way the Soviets conceived of their reconnaissance strike complex. It was going to be completely automated. We believe that the advantage we have as we start this competition is our people.”

That sounds awfully noble, but it may not be strategically sound. We don’t know what the future holds, but it’s likely that drones which are run by humans will not be able to compete with drones that make their own decisions. Automated war machines won’t suffer from mental fatigue, won’t question orders, and they’ll be able to make decisions far faster than their human counterparts.

If that turns out to be true, then we can expect an arms race of fully automated drones between the world’s superpowers, and for better or for worse (probably worse) warfare will never be the same again.