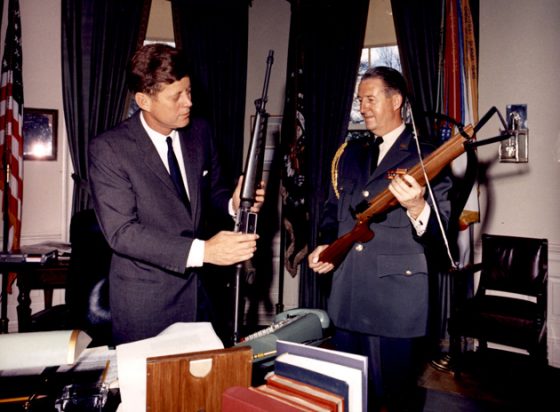 Despite reported pleas from the intelligence community to delay their release, President Trump is set to declassify the tens of thousands of remaining CIA documents relating to the JFK assassination, according to a report by longtime Trump friend and adviser Roger Stone.

Stone, who is also an Infowars correspondent, spoke to the president Thursday about the issue as well as the fears of some within the CIA over the files pending release.

“Yesterday I had the opportunity to make the case directly to the President of the United States, by phone, as to why I believe it is essential that he release the balance of the current redacted and classifeid JFK assassination documents,” Stone detailed in an appearance on the Alex Jones Show.

“He was all ears,” Stone continued. “The president believes in transparency, he believes in the public’s right to know.”

Stone stressed that Trump didn’t specifically tell him that he had planned to release the files, but the way he took the information in and his past beliefs on the subject made it seem highly likely that he was leaning towards their release.

During the interview Stone also detailed the fact that the CIA doesn’t want the files released and why this may be the case.

“A very good White House source, not the president, told me that the Central Intelligence Agency, specifically the CIA director, have been lobbying the president furiously to not release these documents,” he noted.

“Why? I believe they show that Oswald was trained, nurtured, and put in place by the CIA, it sheds very bad light on the deep state – the same characters trying to take down our president right now.”

As it has gotten closer to their possible release, there haven’t just been ramblings in the intelligence community as mainstream authors of books that point to Oswald as the lone gunman have also publicly wrote about their worry that “experts” would not be able to dissect the documents before the public are able to read them.

An article in the establishment Politico Magazine by two mainstream JFK authors, Philip Shenon and Larry J. Sabato, quotes Stone about the CIA’s worry while also adding worry of their own.

As it stands now, the document release this month will be a logistical nightmare, with the public suddenly flooded with a huge online library of documents—tens of thousandsin total—that will be, at first, mostly incomprehensible even to experienced students of the assassination. The National Archives, abandoning its plans to release the documents in batches over the course of several months, said this week that it will instead release everything at once—all on the same day—sometime between now and the deadline on October 26.

With everything made public at once, pandemonium is all but guaranteed, since major news organizations around the world will want to know, almost instantly, what is in the documents that is new and potentially important. And there will simply be no way for historians and other researchers, even those with a special knowledge of the Kennedy assassination, to make any authoritative judgment as they try to page through tens of thousands of pages of files all at once.

Sadly but understandably, the result will be that many journalists and others will either reach overly hasty, cherry-picked conclusions from individual documentsor throw up their hands, assuming that the confusion over the documents is simply more proof of why it is impossible to know the full truth about JFK’s death—precisely the sort of cynical response the authors of the 1992 law had hoped to avoid. The 1992 law was itself a response in Congress to the furor created by the release the year before of Oliver Stone’s film “JFK,” which suggested that a vast government conspiracy was behind Kennedy’s death.

Clearly a group within the deep state as well as the entire mainstream media machine do not want these documents released as they have the very real possibility of destroying the lone gunman narrative once and for all.

We can only hope that Trump does the right thing and releases the files to the public.