You are here: Home / SHTF Plan / Report: Iran And North Korea Are “Collaborating In An Exchange Of Materials And Technicians To Mutually Develop Nuclear Weapons Capabilities” 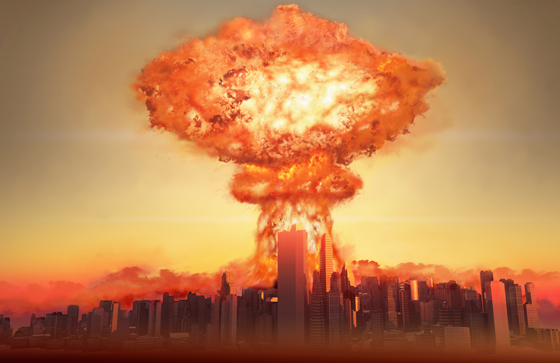 The Public Law. For the Public Good. For your own good, for whatever good it will do. Under Clinton in 1994, Civil Defense was repealed. The Cold War has “ended,” as of 1992 with the “collapse” of the Soviet Union, and it was time to rid the U.S. of all of those “pesky” fallout shelter signs. There was NAFTA and the beginnings of true globalism with the creation of the EU. What need was there for Civil Defense?

Twenty-three years after the treasonous disbanding of Civil Defense and official signs for locations of Fallout Shelters, there is a need for both once more. North Korea has been engaging in exchange with Iran for decades: collaborating in an exchange of materials and technicians to mutually develop one another’s nuclear weapons capabilities.

All News Pipeline’s Stefan Stanford and Susan Duclos have been presenting some excellent and informative articles on the North Korean EMP (Electromagnetic Pulse) capabilities. Many of these articles have been authored by Dr. Peter V. Pry, the foremost expert on the EMP threat facing the United States. All News Pipeline’s article of September 19, 2017is entitled Following Threats To Drop The ‘Father Of All Bombs’ While Claiming They’ve Infiltrated The US Military, Iran Prepares To Deploy 3 New Satellites Into Orbit – Is Iran Preparing To Launch An EMP Attack Upon America?

This piece is no exception to the quality information released thus far by All News Pipeline. Please read it! This article is written by none other than Dr. William R. Graham, Chairman of the Congressional EMP Commission and former Science Advisor to President Reagan. Dr. Graham also was directly involved in the 1962 “STARFISH PRIME” high-altitude nuclear test that began the U.S.’s study into the effects of an EMP.

North Korea has not backpedaled on its threats to nuke the United States and to unleash an EMP weapon if provoked by the U.S. As Dr. Graham’s article points out, this is not only feasible, but soon they will not be alone: Iran plans to launch 3 satellites that can easily be fitted with a miniaturized EMP device. Dr. Graham also corroborates Dr. Pry’s assertions that the 2 North Korean satellites currently in orbit may contain an EMP weapon.

As a matter of fact, Dr. Pry released an article to All News Pipeline on September 18, 2017, entitled, North Korean Public Statement Confirms ‘Worst Case Scenario’ Fears After Many Years of Denial By ‘US Elite’ – Have We Reached Our ‘Rhineland Moment’?This piece gives a list of all the things accomplished by North Korea that were denied by the U.S. Media, the politicians, and the skeptical naysayers of the public within the past 6 months. Most of these denied items were confirmed in many cases by none other than the “experts” who originally denied them and then changed their minds in the face of evidence that could not be refuted.

Iran just increased its military budget, has billions of investment dollars in its nuclear plant facilities and a joint railway project with Russia and several Asian nations, and is one of the last remaining nations not tied to the world bank and the IMF. Iran has held a doctrine for many years of pursuing options with EMP’s launched on missiles hidden within cargo containers on board ships. These options have been tested by the Iranians in several scenarios over the past 5 years. Now there is a growing Iranian naval presence in the Western Hemisphere in Cuba and Venezuela, with plans of sending more of a fleet into the Atlantic.

Dr. Graham and Dr. Pry are both revealing scenarios with both North Korea and Iran that are developing further each day. I strongly encourage you to read these articles. It is important to become aware and educated on a threat that is not going to disappear anytime soon. The expertise of the authors is only matched by their candor and clearly-understandable explanations of the situation.

The next world war will be initiated by an EMP attack against the U.S.

Green Beret Warns: “Skepticism Will Vanish When The Power Suddenly Fails Across the United States”