You are here: Home / The Economic Collapse Blog / Remember This Friday The 13th – Americans Are More Optimistic About The Stock Market Than They Have Ever Been Before 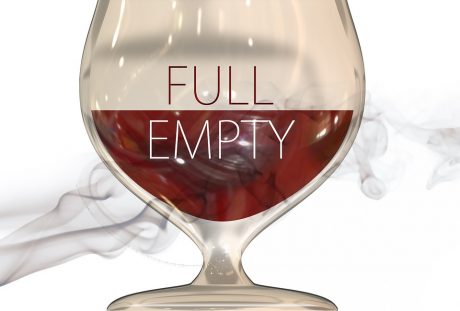 Happy days are here again for the U.S. economy – at least temporarily. On Friday, U.S. stocks hit another brand new record high. It seems like we are saying that almost every day lately, and most investors are absolutely thrilled by this seemingly endless surge. Global stocks are surging too – today world stocks hit a new record high for the 4th consecutive day in a row. But of course it isn’t just stock prices that are rising. As the week ended, pretty much everything was up, and we also got some good news about consumer sentiment. According to the new University of Michigan survey that was just released, U.S. consumers are the most optimistic about the economy that they have been since 2004…

The consumer sentiment index, a survey of consumers by The University of Michigan, rose to 101.1 in October, far ahead of the 95 economists polled by Reuters anticipated.

“Consumer sentiment surged in early October, reaching its highest level since the start of 2004,” Richard Curtin, chief economist for the Surveys of Consumers, said in a statement.

And according to that same survey, we have never been more confident that the stock market will continue to go up than we are right now… 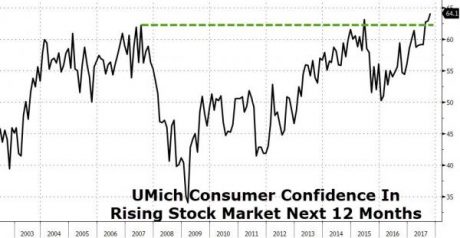 Of course it kind of makes sense why U.S. consumers would be feeling so good about the markets. After all, stocks have only seemed to go up and up and up since the end of the last financial crisis.

But as I have written about so frequently in recent months, our financial markets are even more primed for a crash than they were in 2008, and we have received warning after warning that stock valuations are ridiculously inflated and must come crashing down at some point.

Plus, the “real economy” continues to send us some very troubling signals. The U.S. economy lost jobs last month for the first time in seven years, and we just learned that General Motors is laying off more workers…

Starting in mid-November and going through the rest of the year, General Motors will close its Detroit-Hamtramck assembly plant – its only remaining factory in its hometown – and lay off about 1,500 workers, “people familiar with the plan” told the Wall Street Journal. When the plant does resume production, output will be cut by 20%, and 200 people will be out of a job.

The truth is that we are in the terminal phase of the greatest debt bubble in human history, and all over the planet prominent names in the financial world are warning about what is just around the corner. For example, German finance minister Wolfgang Schäuble is deeply concerned about what he is seeing…

In an interview with the Financial Times, Schäuble said there was a danger of “new bubbles” forming due to the trillions of dollars that central banks have pumped into markets.

He also warned of risks to stability in the eurozone, particularly those posed by bank balance sheets burdened by the post-crisis legacy of non-performing loans.

The bottom line is that a financial crisis is certainly coming. In my latest book, The Road to Ruin, I use 2018 as a target date primarily because the two prior systemic crises, 1998 and 2008, were 10 years apart. I extended the timeline 10 years into the future from the 2008 crisis to maintain the 10-year tempo, and this is how I arrived at 2018.

Yet I make the point in the book that the exact date is unimportant. What is most important is that the crisis is coming and the time to prepare is now. It could happen in 2018, 2019, or it could happen tomorrow. The conditions for collapse are all in place.

It’s simply a matter of the right catalyst and array of factors in the critical state. Likely triggers could include a major bank failure, a failure to deliver physical gold, a war, a natural disaster, a cyber–financial attack, and many other events.

If you look at how stock prices have behaved so far this year, it looks suspiciously just like the bubble that formed in 1987 just before the market crashed.

The conditions for an absolutely historic stock market crash already exist, and they have existed for quite some time. None of our long-term problems have been solved, and with each passing day this colossal financial bubble just keeps getting bigger and bigger and bigger.

I definitely concur with James Rickards. A major financial crisis “is certainly coming”, and because of all the irrational optimism that we are witnessing at the moment most Americans will be completely and utterly blindsided by what is ahead.