You are here: Home / The Economic Collapse Blog / Red Flag Warning: These California Wildfires Are ‘Among The Most Destructive Fire Events In US History’ And They Are About To Get Even Worse 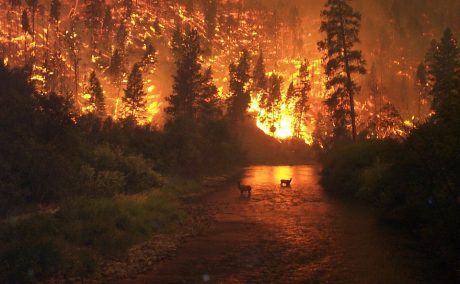 The wildfires that are roaring through northern California are already “among the most destructive fire events in U.S. history”, and by the time it is all said and done this could be the worst wildfire season in the history of the state. So far, fires have scorched more than 250 square miles, and more than 3,500 homes and businesses have already been destroyed. The official death toll has risen to 21, but that is expected to rise dramatically because over 600 missing persons reports have been filed with authorities. The worst damage has been done in Napa and Sonoma counties, and you can see some deeply troubling photos of the devastation here and here.

Unfortunately, this crisis is far from over. In fact, the National Weather Service has just issued a pair of “red flag warnings”…

The weather forecast is not looking good for those living in wine country, and for those firefighters trying to get a handle on the 22 wildfires raging through Northern California, which broke out Sunday and are barely contained more than three days later.

The National Weather Service issued a red flag warning for the North and East bays starting at 5 p.m. Wednesday and midnight on Thursday respectively.

That means winds can gust from 20 mph to 50 mph in the higher elevation areas, fanning the flames down mountains and into the cities.

So as bad as things are at this moment, the truth is that they are going to get even worse over the next 24 hours.

And that is quite sobering to hear, because this is already one of “the most destructive fire events in U.S. history”…

“This is a serious, critical, catastrophic event,” Cal Fire Chief Ken Pimlott said. “It’s pure devastation, and it’s going to take a while to get out and comb through all this.”

Of course this crisis comes on the heels of several other major disasters. In recent weeks our nation has had to deal with Hurricane Harvey, Hurricane Irma and the Las Vegas shooting, and many have pointed out that the U.S. has not seen a series of disastrous events such as this in a very long time.

It would be hard to overstate the devastation that we have witnessed in northern California so far. In some areas, it literally looks like a war zone…

What would you do if your home burned to the ground?

Perhaps you could use the insurance money to rebuild eventually, but what would you do in the meanwhile?

Everywhere you go in northern California the smell of smoke fills the air. At this point it is so bad that even San Francisco is reporting “the worst air quality ever recorded”…

“We are reporting the worst air quality ever recorded for smoke in many parts of the Bay Area,” said Tom Flannigan, spokesman for the Bay Area Air Quality Management District. “This is similar to what you see in Beijing China in bad air days there.”

And the economic damage that is being done by these fires is going to be felt for many, many years to come.

As the quote below explains, California accounts for approximately 85 percent of the wine production in the United States, and Napa and Sonoma counties are the heart of the wine industry in the state…

Wine industry experts say that even if a winery’s vineyards remain standing, they face steep challenges as their employees struggle with burned or damaged homes. The region counts wine and tourism as top employers, and many workers who pick grapes or work in hotels may be compelled to relocate after losing everything.

Napa and Sonoma counties are home to around 900 wineries (of 4,600 statewide), with most boutique businesses making higher-end wines. The two counties represent 13% of the state’s output. And the state itself supplies 85% of the nation’s wine production, making it the fourth-largest producer of wines after Italy, France and Spain.

Expect the price of wine to go up substantially in the months ahead, and this is going to be a huge hit for one of the most economically prosperous areas of the state. Many of the facilities that have been destroyed will never be rebuilt, and needless to say the tourism industry in northern California will not be the same for a very long time.

But the true extent of the devastation will not be known until the crisis is over, and it looks like the worst chapters may still be ahead. USA Today is reporting that no rain is in the forecast, and strong winds are going to continue to push wildfires very rapidly across the region…

“No rainfall is forecast for ongoing fires in California,” the weather service said. “Strong winds behind the front will bring elevated-to-critical fire weather threats to active fires across northern California today into Thursday.”

Please pray for the people living in northern California. Normally, it is one of the most beautiful areas on the entire planet, but now it is literally being transformed into a complete and total nightmare.

For years, I have been writing about the alarming increase in the intensity of wildfires all over the country. One of the big reasons for this is the fact that the federal government is not properly managing the lands under their control, and so wildfires tend to burn more rapidly on federally-owned lands. It is time for the federal government to start turning over ownership of these lands to the states, and that is something that I plan to fight very hard to accomplish.