As the world watched with bated breath for any dovish tilt from Draghi this morning, RBC’s head of cross-asset strategy Charlie McElligott laid out his game-plan. While the EUR is higher (hawkish), bund yields are lower (dovish) McElligott warns the cozy calm ‘status quo’ could get a rude interruption in the fall… 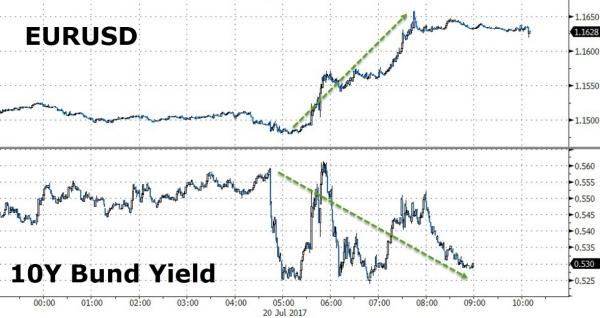 Having not quite got the reaction he wanted, leaks were implemented to force the dovish tilt…

So as McElligott wrote earlier:

This could in fact set table for a mini ‘taper tantrum’ into late Summer / early Fall liquidity doldrums, as ‘tightening into slowing’ fears resume against a spike in interest rate volatility. This could also help fuel further equity factor rotation into underweighted ‘value’ from hyper-crowded ‘growth’ as nominal rates jump higher, or even outright ‘risk off’ on the reintroduction of rate vol.

WHAT A CONSENSUS ‘MORE DOVISH THAN NOT’ MESSAGE MEANS FOR THE DIRECTION OF MARKETS: IF the market hears the ECB and “wills it to be dovish” (as it currently ‘feels’ to me like folks are leaning), then risk-assets (equities and credit, status quo, led by growth stocks and CCC bonds) will be expected to trade higher / rates expected to trade directionally lower as the sense that the eventual ‘taper tantrum’ has again been avoided for at least another month, until the aforementioned Draghi / Jackson Hole event, followed shortly thereafter by the Fed’s likely commencement of balance sheet normalization in September.

It is possible that if the Euro rolls hard on ‘even more dovish-er’ commentary, that commensurate USD strength could then help keep US rates from seeing their own ‘uber-dovish’ interpretation and moving sharply lower—more like a ‘pin.’ A stronger Dollar reaction too would likely keep a lid then on crude oil prices too, which has benefitted from the recent Dollar weakening on ‘policy convergence’ / collapsing rates differentials. Finally, USD strength should modestly lean on EM FX and Equities. FWIW, MSCI EM equities are now up EIGHT CONSECUTIVE DAYS as the index has broken above a 10 year trendline resistance.

Of course, the risk is this: if it is consensus to believe that Draghi will come off as ‘dovish,’ the bar is then set very high for disappointment. If Euro were to rally, Dollar gets hit, US rates could instead pop higher on any sense that it wasn’t dovish enough. Then you have a recipe for some ‘wrong-footed’ trading.

A dovish / bullish risk read today continues for the next 5 or so weeks as a ‘taper tantrum’ is avoided and carries us through US equities earnings ‘micro’ focus as well (where investors put on their macro blinders and reward ‘growth’ i.e. NFLX / FAANG / FAAMG-types, grinding overall indices sleepily higher).

1) Draghi’s Jackson Hole speech looms large as a potential ‘policy inflection platform’ to reintroduce the market to the ECB’s tapering intentions in September.

And a few weeks later, 2) the US Fed is also expected to announce their commencement of balance-sheet normalization (through cessation of reinvestments).

And don’t look now, but 3) the Chinese liquidity injections of late (another 330B Yuan injected this week) are POWERING COMMODITIES higher – another positive input to higher nominal rates (recall as I say every note, ‘inflation expectations’ and ‘iron ore’ are the largest macro factor contributors to both US rates and US equity ‘value vs growth’).

This combination of ‘interest rate vol’ events could drive another bout of ‘taper tantrum’ into the late Summer liquidity doldrums and fresh off of the ‘synthetic tranquility’ of US equity earnings season – a cocktail for Fall Vol on the resumption of ‘policy convergence’ and ‘tightening into slowing backdrop’ fears, as well as ‘set the table’ for resumption of further ‘value / growth’ rotation within the equities factor space, or even outright ‘risk off’ on the rate vol reintro.