You are here: Home / Zero Hedge / Rats Fall From Ceiling At Dallas Chipotle In “Rare And Isolated Incident”

A day after Chipotle Mexican Grill faced an outbreak of norovirus at a Chipotle restaurant in Virginia, the company’s PR team is dealing with yet another embarrassing public-health incident. A Dallas TV station reported that, at one local Chipotle restaurant, customers’ lunch was ruined when several rodents reportedly fell from the ceiling and landed inside the dining area.

Footage of the incident – as one angry customer remarked – is enough to put one off from eating at the chain indefinitely:

Customers said the rats appeared to materialize from out of nowhere:

“If we would have been sitting at the table next to that it definitely would have fell on top of our food because it was literally right there,” Daniela Ornelas, of Dallas, told NBC DFW, adding that she and her boyfriend were eating during the lunch rush at the restaurant.

“I just kept wondering what it was, and I kept looking around until I looked at the floor, and I saw three rats, and I ran,” Ornelas said.

Chipotle shares plunged more than 6% on Tuesday after multiple customers reported getting sick after eating at a restaurant in Sterling, Virginia. Customers reported symptoms such as vomiting, diarrhea, severe stomach pain, dehydration, and nausea to the website iwaspoisoned.com, alerting Business Insider, which confirmed the norovirus outbreak with the company. At least 13 customers fell ill after eating at the Virginia Chipotle between July 14 and 15. 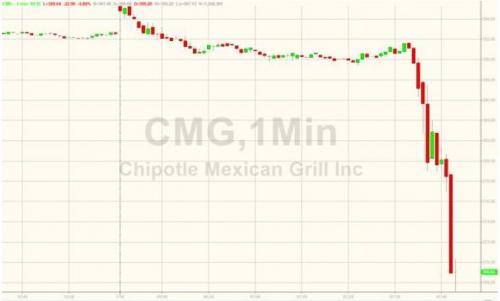 The outbreak echoed a public relations nightmare from two years ago, when reports of diners getting sick at Chipotle restaurants around the country first began to emerge. The company was found responsible for cases of salmonella, norovirus and e. coli, and saw its same-store sales decline precipitously. Chipotle’s shares shed nearly 50% of their value in the aftermath, a decline from which they have never recovered.

A Chipotle spokesperson issued a statement to NBC DFW Wednesday to explain how the rodents ended up in the dining room, adding that it was an “extremely isolated and rare.”

“We learned yesterday that mice got into a restaurant,” the statement read, “and we immediately contacted professionals who identified a small structural gap in the building as the likely access point. We’re having it repaired. Additionally, we reached out to the customer to make things right. This is an extremely isolated and rare incident and certainly not anything we’d ever want our customers to encounter.”

Still, it looks like Chipotle is going to lose a few customers over this one.

“Ornelas said she was happy with how the employees handled the situation, but would likely not return to Chipotle’s West End location.”

However, the outbreak hasn’t scared off devoted Chipotle customers like Bill Ackman. Ackman sent his first-ever tweet on Wednesday, featuring a photo of him smiling inside a Chipotle restaurant, with a caption that read “eating our own cooking @ChipotleTweets.” Ackman’s fund, Pershing Square Capital Group, owns 10% of Chipotle.

Eating our own cooking @ChipotleTweets and making my own mix at https://t.co/CiNtycYWhPpic.twitter.com/rYad7uKuI3

Now, imagine what would happen to the stock price if Ackman got salmonella?