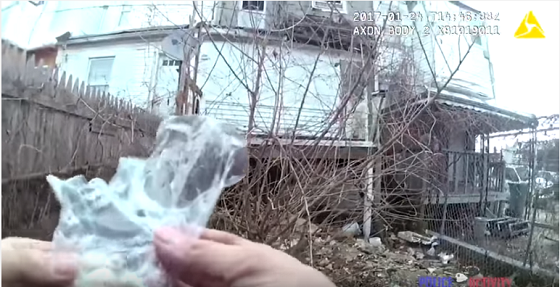 An investigation has been launched by Baltimore prosecutors and police after body camera footage came to light that shows an officer planting drugs at a crime scene, according to the Baltimore public defender’s office.

The footage, captured in January after a drug arrest, depicts officer Richard Pinheiro of the Baltimore Police Department along with at least two other officers. At the beginning of the video, Pinheiro is seen placing a plastic bag inside of an aluminum can, which he tosses into a heap of trash. The officer then walks to the street and activates his body camera.

Police body cameras have a function that saves 30 seconds of footage without audio before the camera is activated, making it harder for police to obfuscate what they do on the job by purposely turning body cameras off or on at particular opportune moments.

Pinheiro, about 30 seconds into the footage, is then heard saying “I’m gonna go check here,” after which he returns to the trash heap and briefly pretends to be looking for something. He quickly “finds” what he was looking for, the can, removing the bag that contains what is reported to be heroin capsules:

“We take allegations like this very seriously and that’s why we launched an internal investigation into the accusations,” Baltimore Police Department spokesman T.J. Smith told the Baltimore Sun. “We are fortunate to have body-worn cameras which provide a perspective of the event.”

The public defender’s office brought the video to the attention of prosecutors, who dropped all charges against the suspect arrested for the drugs, which included possession with intent to distribute. The man, Tyrone Jones, 27, had sat in jail since his January arrest, unable to pay his $50,000 bail, according to assistant public defender and police accountability activist Deborah Levi.

Jones turned down a plea deal that could have put him in prison for up to 12 years, according to a Jones family member, but he remains in jail waiting for a parole violation hearing.

Just days after they were shown the body cam footage, Levi said prosecutors called Pinheiro as a witness for another case without informing the defense attorneys on the case of the allegations against the officer.

“You can’t try a case with that guy and not tell anyone about it,” Levi said.

The public defender’s office, in a statement issued Wednesday, said the state’s attorney’s office hasn’t done enough in response to the video, citing the fact that Pinheiro is a witness in 53 other active cases.

While it isn’t clear if Pinheiro was planting evidence or simply re-creating a drug find, it highlights problems with police body cameras, which are intended to make officers more accountable. The cameras don’t quite serve that function if they can be turned off at will.

Baltimore public defender Louis Curran speculates that Pinheiro was attempting to wait out the 30 seconds before activating his camera, but miscounted and accidentally filmed himself planting evidence. “I guess that he’s not the sharpest knife in the drawer,” Curran said.

The Baltimore Police Department last year conducted over 250 reviews of body cam videos depicting traffic stops, arrests and field interviews to assess officer compliance with rules established for the technology, according to records obtained by the Baltimore Sun.

The reviews found that, while many used the cameras correctly, a significant number of officers were in violation of those rules, often failing to record police encounters with suspects or citizens. Forty-seven videos which may depict police misconduct were forwarded by the inspectors for further review.

According to the rules governing the use of body cams, officers are supposed to begin recording “at the initiation of a call for service or other activity or encounter that is investigative or enforcement-related in nature.” Officers are, however, permitted to stop recording at the request of a citizen during a voluntary encounter, or during interviews with confidential informants.

At a press conference on Wednesday, Baltimore Police Commissioner Kevin Davis confirmed that at least one BPD officer has been suspended and stripped of police powers until the investigation concludes. Two other officers were placed on administrative duty.

According to the Baltimore state’s attorney’s office, prosecutors are looking into the video.