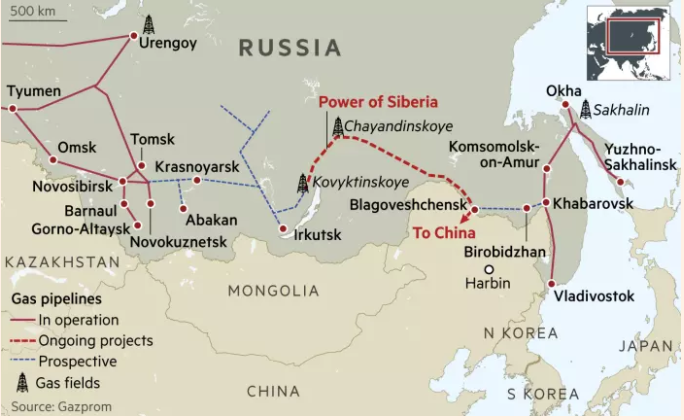 The US Congress should look into what consequences the Power of Siberia pipeline between Russia and China will have on Washington’s interests.

This was said in a recommendation by US analysts, reviewed by RT.

According to the document, the operation of the pipeline, which began work in December 2019, could potentially lead to a reduction of US liquefied natural gas (LNG) sales.

According to American experts, Washington is currently focused on confronting Nord Stream 2, and not on deliveries of Russian energy to China. Meanwhile, on top of Power of Siberia, China is also purchasing more Russian crude oil than before.

China is the United States’ biggest client, and it is in jeopardy of losing a big share of its business.

Russian-Chinese cooperation, which is necessary for the functioning of the gas pipeline, “does not bode well for the United States as a whole, or for their relations with each country,” the document reportedly reads.

At the same time, the authors of the report indicate that further interaction between the Russian Federation and China in the energy sector may lead to losses in the export of American liquefied natural gas (LNG).

“Although the Power of Siberia gas pipeline does not cause much concern to the United States, a larger agreement between Russia and China could usher in new market trends and promise US losses in future LNG exports,” the research service said.

American experts recall that by 2025, when the gas pipeline is operating at full capacity, the Power of Siberia will supply 38 billion cubic meters of gas per year to China. This will be 13% of all China’s demand in 2018. Thus, in five years, Beijing will become the second largest buyer of Russian natural gas after Germany.

The report emphasizes that, according to some experts, the pipeline was supposed to be a signal for Washington.

“Speaking about Russia, the launch of the gas pipeline showed that neither the USA nor Europe will be able to prevent the Russian Federation from pursuing its interests. In the case of China, the time of putting the gas pipeline into operation showed that American LNG has ceased to be a serious motivating factor in a trade dispute,” the service underlines.

This is another aspect of the geopolitical competition between US and China, and US and Russia – in a way, the current biggest competitor for Washington is Beijing, but it is also one of the biggest, if not the biggest market for energy, and other products. At the same time, Moscow is a competitor for that business, while at the same time, it is not in US interest to push Russia too much since it would risk causing Beijing and Moscow to cooperate even further, as is seen with the “investments” in the form of purchasing oil, even when there’s cheaper alternatives.

The launch of the Power of Siberia gas pipeline took place in December 2019. The contract for the supply of fuel under it to China is designed for 30 years. It is expected that over this time over 1 trillion cubic meters of gas will be delivered. The first six months, pumping will take place in commissioning mode, and the Power of Siberia will work at full capacity by 2025.

The gas pipeline is a joint project of Gazprom and the China National Petroleum and Gas Corporation (CNPC). Its length only in Russia is about 3 thousand km. The Power of Siberia begins with the Kovykta gas field, then passes the Chayandinskoye and Amur gas processing plants, and then crosses the Chinese border.

According to Russian President Vladimir Putin, the Power of Siberia is an unprecedented in scale high-tech project.

The Chinese side, in turn, also considers the project strategically important. So, Deputy Foreign Minister Le Yucheng said the deal with Russia will become a new incentive for practical cooperation between the two countries.

Meanwhile, the Congressional Research Service noted that the administration of US President Donald Trump does not pay due attention to the export of Russian gas to China. The authorities are mainly focused on the dependence of Europe on fuel from the Russian Federation.

Washington has made a lot of efforts to try to stop the implementation of Nord Stream 2. So, on December 21st 2019, Trump imposed sanctions against the project. As a result, the Swiss company Allseas, which was laying the underwater elements of the pipeline, stopped its work and refused to return to construction.

All of this has been for naught, since construction on it continues and it will be active sooner, rather than later.

In addition, it should be mentioned that recently, there’s been hints that Gazprom is working towards the next mega project – Power of Siberia-2 and that it is not simply a rumour, but something likely to happen.

The idea to construct Power of Siberia-2 (PoS-2) was flaunted already in the early 2010s, its purpose being of meeting the gas requirements of Western Chinese provinces via Mongolia. This late March Gazprom’s request of conducting a feasibility study for PoS-2 has found President Putin’s approval. The projected pipeline would have a throughput capacity of 50 BCm per year and would be traversing Russia’s Altay region before crossing over to Mongolia and Western China. The first thing that struck market observers was that at some point in early 2020 the capacity of Power of Siberia-2 was upgraded from a preliminary estimate of 30 BCm per year to an officially presented volume of 50 BCm per year.

The framework for Power of Siberia-2 (also known as the Altai pipeline) was laid down in 2015 when Gazprom and the Chinese state-owned company CNPC signed a preliminary gas supply deal, without specifying the technicalities of pricing. Given that Pos-1 pricing talks took a decade to conclude, the tardiness of PoS-2 negotiations is hardly surprising.

Yet at the same time Russian authorities are betting heavily on it happening – the recently issued Energy strategy-2035 sees pipeline gas exports reaching 300 BCm per year by 2035, of which 80 BCm per year will go to China, with European pipeline exports effectively stalling for the next decade and half. It has to be noted that the Energy Strategy also surmises a “pessimistic scenario”, whereby Gazprom’s gas exports increase from 220 BCm in the base year of 2018 to 255 BCm per year in 2035, meaning a slight decline in European demand and Power of Siberia-1 remaining the only China-bound gas conduit, with no Pos-2 construction taking place.