You are here: Home / Zero Hedge / Porsche And Mercedes Plot Musk Offensive With “Anything Tesla Can Do, We Can Do Better” Strategy

Tesla you have a problem, well several actually.

But, before we get into all the competition that is about to flood your market, lets take a look at some basic math surrounding your valuation. Ford currently generates roughly $1,800 of EBITDA per vehicle and trades at a total enterprise value of $35 billion, roughly 3x their median EBITDA forecast for 2017.

Now, clearly Tesla is a way better company than Ford could ever dream to be…but, just for fun, lets consider what kind of sales volumes Tesla will eventually have to achieve in order to grow into its current valuation of $66 billion (roughly 2x that of Ford mind you). If we assume that even a mature Tesla should trade at 2 times the prevailing Ford multiple, or 6x EBITDA, that implies that Tesla needs to generate about $11 billion of annual EBITDA once it hits maturity. Now, if Ford can generate $1,800 of EBITDA per vehicle then surely Tesla can find a way to do $3,000…which implies that Tesla’s current valuation requires 3.7 million of annual auto sales versus the 80,000 it managed to sell in 2016…or just over 45x it’s current run-rate. To put that into perspective, BMW sells roughly 2.4 million cars per year.

And while we don’t like to be nitpicky, that doesn’t even include the billions of dollars worth of negative cash flow that Tesla would have to incur to reach those sales volumes or the pesky effects of compounding, both of which would make the valuation even more bleak.

Meanwhile, achieving 3.7 million in annual sales would be a daunting task even if every other luxury auto maker in the world weren’t looking to viciously attack your market, which, unfortunately for Tesla shareholders, they are. As Bloomberg notes, Daimler recently announced plans to spend $1 billion to ramp up electric car production at their plant in Alabama.

Daimler AG plans to spend $1 billion to start production of Mercedes-Benz electric vehicles at its Alabama factory, setting the world’s largest luxury-car maker up to battle with battery-car specialist Tesla Inc. on its home turf.

The German automaker will build its fifth battery plant globally and create more than 600 jobs in the region, the company said Thursday in a statement. The Alabama factory will assemble electric sport utility vehicles, taking on Tesla’s Model X and making Stuttgart-based Daimler the first European company to assemble plug-in autos in the U.S.

“We’re celebrating our 20th anniversary at our production facility in Tuscaloosa, Alabama, and we’re taking this as an opportunity to expand the operation and further fuel growth,” production chief Markus Schaefer said in a Bloomberg TV interview. “We’re very confident for future growth in the U.S. in the long-term. ”

Daimler’s investment shows the carmaker’s shift to electric vehicles is taking shape. The German manufacturer is also in talks to expand its Denza joint venture with BYD Co. in China with additional models, Chairman Wang Chuanfu told a group of reporters in the southern Chinese city on Thursday.

As Sanford Bernstein analyst Max Warburton noted, the investment is all part of Mercedes’ “anything Tesla can do, we can do better” strategy.

The company is pursuing an “anything Tesla can do, we can do better” strategy, Sanford Bernstein analyst Max Warburton said in a recent note to investors. “Mercedes is convinced it can match Tesla battery costs, beat its manufacturing and procurement costs, ramp up production faster and have better quality. It is also confident its cars will drive better.” 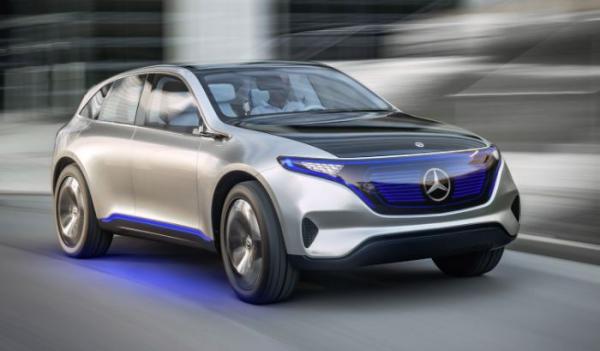 Meanwhile, Porsche is even closer to launching competitive, all-electric vehicles with the “Mission E” scheduled to hit dealer floors by the end of 2019.

While automakers have been not-so-quietly making promises to catch up to the likes of Tesla when it comes to electric vehicle range, a sports car maker may be the first to beat the startup at its own game. A production version of the 2015 Porsche Mission E electric concept is scheduled to go on sale at the end of 2019, with a price expected to start in the $80,000 – $90,000 range, according to CAR Magazine.

That apparently means in performance terms, too. Unlike Porsche’s current range of hybrids the Mission E won’t be offered with any internal combustion engine assistance. And yet the concept promised a 0–60 time of less than 3.5 seconds and a top speed of around 155 mph through a dual-motor setup that also allows for all-wheel drive. While a Tesla Model S P100D may beat it off the the line in its most ludicrous of modes, the Porsche would ultimately keep up on an unrestricted stretch of Autobahn. Yet like Tesla, Blume says Porsche will offer the Mission E with different power levels, so your “basic” $90,000 version may not be quite as powerful.

Blume also didn’t rule out expanding the Mission E range to include other styles, which may include a coupe or wagon or SUV. Porsche may be known for sports cars, but its Cayenne SUV has been pretty successful over the years. And being part of the vast Volkswagen Group that has promised to electrify everything by 2030, a slew of electric-only Porsches by then wouldn’t be so surprising.

Perhaps Tesla shareholders are starting to realize that the jig is up…or is this just another blip on the way to an inevitable $100 billion valuation? 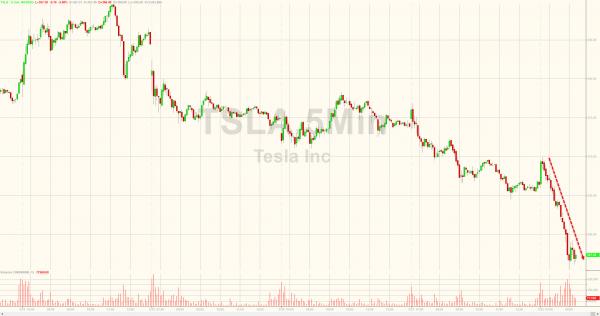