Over the past months, SouthFront, among other dissident media and analytical organizations, has been facing an increasing pressure.

In January and February, SouthFront Team became the target of a technical and media pressure campaign from Google because of our independent and critical coverage of the escalating US-Iranian conflict and its negative consequences for the stability of the Greater Middle East. (LINK 1, LINK 2)

In March, it appeared that an independent point of view is now terrifying propaganda & censorship structures of the European Union. The developing economic crisis and coronavirus outbreak threw Europe in chaos, smashed the myth about the so-called Euro-Atlantic solidarity and demonstrated the failure of the EU bureaucracy to do something besides sucking budgets and selling sovereignty of European nations to the United States and the global capital. However, instead of facing the reality and starting to work to contain the real problems, EU budget suckers started searching enemies to blame for the disinformation about epic successes of Brussels in fighting against coronavirus.

The European External Action Service named southfront.org among key platforms providing ‘wrong coverage’ of the situation. The Orwellian logic of the European bureaucrats insists that if facts, real developments or history contradict their interests, they must be hidden, bury in oblivion or at least labeled enemy disinformation and propaganda.

In particular, SouthFront: Analysis & Intelligence, was mentioned in a Deutsche Welle article on March 21, 2020. The article “Corona-Desinformation: immer dieselben Muster” mentions SouthFront even before huge-funded RT and Sputnik accusing our organization of spreading fake news about the coronavirus (COVID-19) outbreak and alleging that SouthFront is a part of a Russian disinformation campaign. 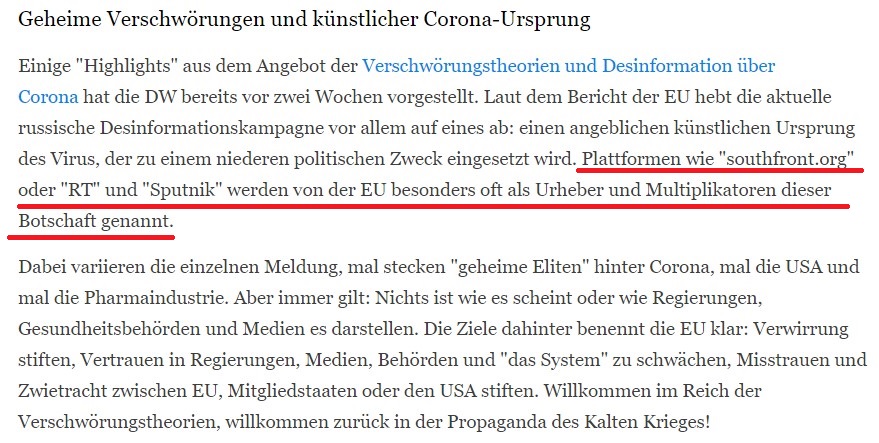 SouthFront cannot talk on behalf of RT or Sputniknews, but in our coverage, we rely on facts. If SouthFront provides some expert opinions, it always explains them using facts and logic.

It is interesting to note that since the declaration of the COVID-19 outbreak a pandemic SouthFront has not criticized actions of European national governments (Germany, France, and even Italy). A couple of times we drew attention of the audience to too emotional actions of US President Donald Trump. On the other hand, we released several indeed critical articles about the internal political situation in Russia. In all articles mentioning the medical and pandemic situation, we were referring official scientific and medical centers: the Robert Koch Institute, the Centers for Disease Control and Prevention, the Statale di Milano University as well as other official and respected bodies from Italy, Spain, Russia and other countries.

It has been brought to our attention that our international endeavour, SouthFront: Analysis & Intelligence, was mentioned in a Deutsche Welle article on March 21, 2020.

The article “Corona-Desinformation: immer dieselben Muster” mentions SouthFront alongside with RT and Sputnik accusing our organization of spreading fake news about the coronavirus (COVID-19) outbreak and alleging that SouthFront is a part of a Russian disinformation campaign.

This claim made by the article’s author is itself fake news, which is easy to confirm by taking a closer look at the articles and videos actually published on southfront.org. In its coverage of the COVID-19 outbreak and social phenomena caused by it, SouthFront always references the sources of the data used. These are the Robert Koch Institute, the Centers for Disease Control and Prevention as well as other official and respected bodies from Italy, Spain, Russia and other countries. SouthFront is used to see accusations that we are an Iranian or Russian mouthpiece regarding the Middle East agenda.

SouthFront has never claimed that the COVID-19 outbreak is a result of a conspiracy by “global backstage elites” or that COVID-19 has been created artificially. Indeed, we shared opinions of Global Research and ZeroHedge on the topic: https://southfront.org/coronavirus-covid-19-made-in-china-or-made-in-america/, https://southfront.org/the-real-umbrella-corp-wuhan-ultra-biohazard-lab-was-studying-the-worlds-most-dangerous-pathogens/ with all references to the sources of these opinions. The publishing of these two opinion pieces from other sources does not justify the assertion that SouthFront is itself making these claims. ZeroHedge and Global Research see SouthFront as an independent reliable partner because our relations are fully transparent and noncommercial.

SouthFront’s position is that various influence groups and powers, including Russia, are now using the COVID-19 outbreak to push their own agenda. Incidentally if SouthFront has criticized any official authorities in the framework of pandemic issues, it was in fact the Russian ones: https://southfront.org/while-the-world-is-in-disarray-covid-19-is-breaking-up-russia/, https://southfront.org/russia-to-halt-flights-returning-its-citizens-from-abroad-as-tens-of-thousands-still-wait-evacuation/, https://southfront.org/mandatory-lockdown-in-russia-is-extended-until-april-30/

SouthFront is an international, crowdfunded endeavor uniting people with various political views from more than a dozen countries. It receives no support from any governments and corporations. We rely only on a comprehensive co-working of our multiple proactive authors and volunteers, and a fact-checking control by our big international team. SouthFront is always open for a constructive dialogue.

The SouthFront team is united by the will to provide comprehensive analysis and independent coverage of key military, survival, political and security developments around the world.

We suppose that the decision to mention SouthFront in the aforementioned Deutsche Welle article was an oversight in that the author did not take the opportunity to check his facts through a closer look at SouthFront coverage. We would hope and do assume that this was not the result of someone directly wishing to harm our organization.

In the interests of professional journalism, we ask you to investigate this situation promptly and remove the fake information forthwith.

On April 9, Facebook placed limits on SouthFront’s page due to activities that “don’t comply with Facebook’s policies.” Apparently, this is a first thing of a new wave of war on independent media carried out corporations and bureaucrats affiliated with the global elites.

We believe all these attacks, accusations and attempts to censor SouthFront are a strong signal that we are on a right track. SouthFront steadily faces pressure and accusations regarding its coverage: the situation in the Middle East, the US-Iranian tensions, the US-Chinese global standoff, actions of the Russian foreign policy etc. Today, a new global issue appeared – the COVID-19 pandemic, and SouthFront is once again being targeted. This happens despite the fact that SouthFront provides a very careful coverage of the COVID-19 crisis based on facts. SouthFront understands the importance of the pandemic and social economic crisis caused by it.

Regardless of the challenges that we face, SouthFront will continue to do its best to provide you with an independent look at key military, security and political developments around the world.

IF YOU THINK THAT SOUTHFRONT’S WORK IS IMPORTANT, YOU CAN HELP OUR ENDEAVOUR TO STAY ALIVE BY YOUR DONATIONS:

Donate via VISA, PayPal, Paysafecard, Bitcoin and other options.

This systems accepts all types of cards, PayPal, Amazon Payments, bitcoin (FAQ is under the main text, in P.S.) 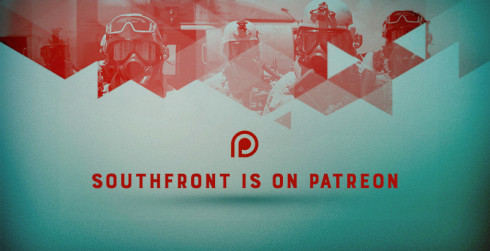