You are here: Home / The Daily Sheeple / One Bad Apple? Half Of An Entire Police Dept Suspended—Including The Chief 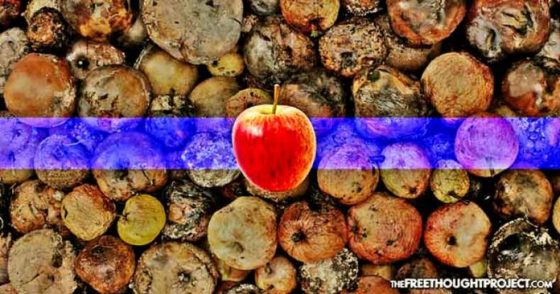 Half of the city’s police force has been suspended, including their police chief, amid allegations of official oppression and evidence tampering.

LLANO, TX – All too often those who continuously apologize for crimes committed by police officers are able to justify some of the most egregious instances of outright murder by claiming the officer was a bad apple. Almost as often, however, as TFTP has shown numerous times, the bad apple theory is exactly that—a theory—with no evidence to support it.

There are eight law enforcement officers employed by the Llano Police Department, according to the LPD’s website, meaning that half of the police force is now under suspension.

Does that seem like “one bad apple,” or a potentially much greater problem?

Four police officers are under investigation by the Llano County District Attorney’s Office, including the police chief—who suspended himself—in connection to the arrest of a man, and his subsequent complaint, according to KVUE.

Must be nice to be able to give yourself a paid vacation just after potentially committing a crime while on the job—a luxury afforded only to police officers.

According to the news report by KVUE:

Sgt. Jared Latta and Officer Aimee Shannon have been on paid suspension since Friday. Officer Grant Harden, who is also under investigation, in this case, has been suspended since December and was indicted for tampering with evidence and official oppression.

However, officials could not confirm if Harden’s indictment is related to the citizen’s arrest cited in the investigation.

The DA’s office said that the Texas Rangers are assisting with conducting the investigation.

The Llano County Sheriff’s Office will provide assistance to the city while half the police force is on suspension, as LCSO has a mutual assistance agreement to back them up on calls when necessary.

Those that forward the idea that the problem is simply a few bad apples, allow the systemic problems in law enforcement to continue without being addressed.

While the suspension of half a police force may come as a surprise to some, it’s no surprise to The Free Thought Project, as we’ve reported on numerous similar incidents.

For example, in March 2015, the Brooklyn Police Department came under investigation amid allegations that weapons, drugs and other items had been removed from the evidence room. Then in March 2016, the head of a drug task force in Pennsylvania was arrested for having sex with a minor in exchange for leniency.

More recently, this past July, the entire drug unit of the Troy, New York, Police Department was suspendedfollowing reports that the unit entered a home without a warrant – then tried to cover their tracks by filing false burglary reports.

According to the Times Union, the officers entered a home after they were tipped off by another Capital Region police agency. But then they lied about it.

After realizing they made a major mistake, officers compounded their problems by attempting to cover their tracks. They allegedly filed a false burglary report.

After the police chief became aware of the incident, and the attempted cover-up, the entire drug unit was placed on administrative leave.

The common thread in these disparate cases is that there is no “one bad apple,” but a systemic problem of police attempting to cover for the illicit behavior of other officers – something known as the “thin blue line.”

Essentially, the thin blue line operates as a good ole boys network with a mantra that a good cop looks out for a fellow officer first—regardless of how illegal the activity is, or whether in it violates an individual’s rights. To be accepted by the law enforcement “brotherhood” you look out for fellow cops first. Those that refuse to bend to this expectation are run out of law enforcement by their peers, as we’ve reported on numerous times.

While it’s extremely rare for officers to be held accountable for their illicit actions, the actions of the DA’s office in Llano should be an example to the rest of the country that law enforcement isn’t above the law.

Contributed by Jay Syrmopoulos of thefreethoughtproject.com.

The Free Thought Project is dedicated to holding those who claim authority over our lives accountable.