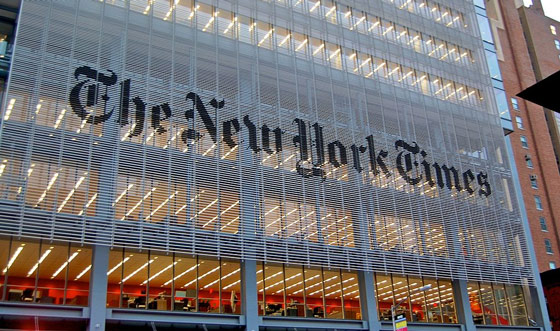 The New York Times has retracted its claim that all 17 US intelligence agencies agreed that Russia was behind the hack of Democratic emails in an effort to influence the 2016 election in favor of Republican candidate Donald Trump.

The Times issued a correction after repeating the claim in a story bearing the headline “Trump’s Deflections and Denials on Russia Frustrate Even His Allies” on June 25.

In the piece, NYT political correspondent Maggie Haberman wrote that Trump still refused to “to acknowledge a basic fact agreed upon by 17 American intelligence agencies that he now oversees: Russia orchestrated the attacks, and did it to help get him elected.”

NYT issues a correction repudiating the “17 intelligence agencies” canard that continues to get endlessly repeated https://t.co/lXDrPTPsHepic.twitter.com/2gCuqjRBNM

Critics were quick to label the Times ‘fake news’ while others took issue with the classification of the Office of the Director of National Intelligence (DNI), an oversight body, as an intelligence agency.

No. The New York Times correction is still wrong. It is 3 not 4. ODNI is a an oversight body not an agency. https://t.co/53gkYxEFnO

Along with the CIA, FBI, and NSA, the remaining US intelligence agencies include the Marine Corps, Coast Guard, Military Intelligence Corps, the Office of Naval Intelligence, and the Department of Energy.

The ‘17 agencies’ claim appears to have been first made by Democratic candidate Hillary Clinton during the third and final debate with Trump ahead of the election last year.

“We have 17 intelligence agencies, civilian and military, who have all concluded that these espionage attacks, these cyberattacks, come from the highest levels of the Kremlin, and they are designed to influence our election,” Clinton said in the October 19 debate. “I find that deeply disturbing.”

Clinton is said to have based her assertion on a joint statement issued by the Office of the DNI, the body overseeing all 17 agencies, and the Department of Homeland Security earlier that month.

“The US Intelligence Community (USIC) is confident that the Russian Government directed the recent compromises of emails from US persons and institutions, including from US political organizations,” the statement read.

Former DNI chief James Clapper testified before the Senate Judiciary subcommittee on May 8, saying that the “special intelligence community assessment” was produced by analysts “hand-picked” from the CIA, NSA, and FBI.

Meanwhile, Clinton repeated the claim again at a tech conference in California as recently as May 31.

“Read the declassified report by the intelligence community that came out in early January,” she said. “Seventeen agencies, all in agreement… they concluded with ‘high confidence’ that the Russians ran an extensive information war against my campaign.”

However, the report she cited outlines in the beginning that it is “an analytic assessment drafted and coordinated among The Central Intelligence Agency (CIA), The Federal Bureau of Investigation (FBI), and The National Security Agency (NSA), which draws on intelligence information collected and disseminated by those three agencies.”