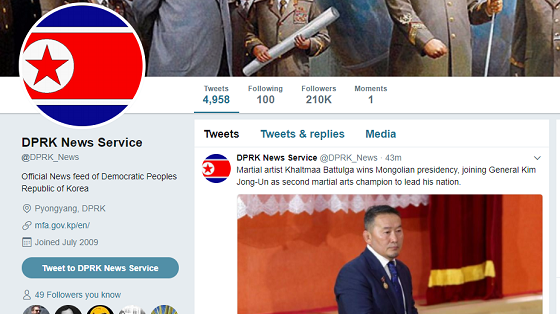 The New York Times was forced to issue a correction after the paper quoted from a parody Twitter account pretending to be a genuine news outlet.

The story, published on Tuesday, initially included a quote taken from a July 4 tweet from the DPRK News Service Twitter account, a parody account that purports to be the “Official news feed of Democratic Peoples Republic of Korea. The tweet in question lambasted the U.S. administration for “drunkenly” firing “missiles into East Sea of Korea”:

It didn’t take the Times long to issue the correction, updating the story within hours of publication, but the blunder is nonetheless embarrassing for one of the top newspapers in the United States.

The correction attributes the mistake to an “editing error”:

As noted by Gizmodo blogger Matt Novak, this is not the first time a major American news outlet fell for the DPRK News Service. Outlets ranging from Newsweek, USA Today, the Washington Post, Fox, Reuters, HuffPost, the Verge and Buzzfeed have all been fooled by the parody account.

Novak reported on the fake account as early as January 2015, which, he said, promptly got him blocked; apparently other outlets failed to take note.

The DPRK News Service Twitter account is run by two Americans, according to the Washington Post. While it isn’t always easy to tell the parody from real statements from the North Korean regime, absurd tweets such as this one tend to let the cat out of the bag: