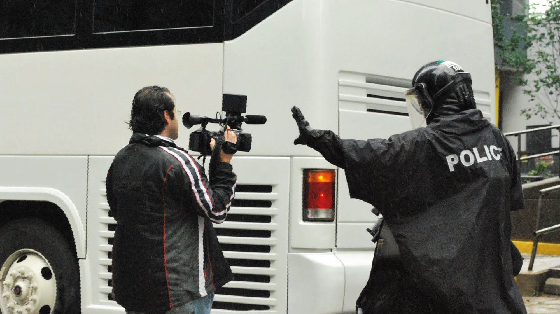 Officers of the New York Police Department have been accused of preventing scores of people from videotaping police interactions over the past three years, according to a report released by the Civilian Complaint Review Board (CCRB).

The Board received some 257 complaints between 2014 and 2016, and 346 allegations that officers attempted to interfere with recording police activity by knocking phones out of people’s hands, blocking them or threatening arrest.

Ninety-six of those allegations were substantiated by the Board, or around 28 percent, but it is likely that many more similar incidents occur and go unreported.

“There is clearly a segment of officers—perhaps very small, but nevertheless real—who feel that they may violate the First Amendment rights of people who record them,” wrote Jonathan Blanks, a research associate for the Cato Institute’s Project on Criminal Justice and the managing editor of PoliceMisconduct.net.

Over half of the complaints were made by people recording their own interactions with police. In 65 cases, they accused officers of either damaging their recording device, or actually deleting the recording from the device.

“Police officers should be held accountable for their actions,” Blanks wrote. “Unfortunately, New York State law prohibits the Department or the CCRB from releasing the names of officers who have complaints lodged against them, whether or not they are sustained, or what the outcomes of any disciplinary actions taken were short of termination.”

The CCRB is recommending the NYPD create new guidelines in its Patrol Guide regarding procedures for handling people who choose to record police, including a section explaining the public’s Constitutional right to record or document police activity.

“The lack of transparency is not limited to New York, by any means, but the NYPD’s institutional dedication to data collection at least gives us a glimpse of what is going on,” Blanks wrote. “Getting the right to record in the Patrol Manual is a good start, but the State of New York should repeal the anonymity granted to misbehaving officers. Such laws punish the best officers by making them indistinguishable from those who intentionally—and sometimes repeatedly—violate the rights of the people they are supposed to serve.”

Blanks’ own write-up on the CCRB report includes a lot of useful information, including an important court opinion on the right to record police, Blanks’ testimony before the U.S. Commission on Civil Rights regarding police practices and the use of force, as well as an interesting 2014 CATO Institute panel on similar subjects.