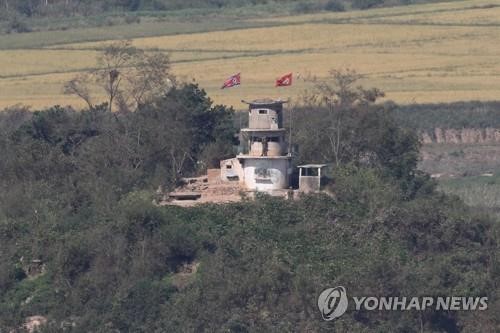 A guard post to the north of the DMZ

The United Nations Command (UNC) said Tuesday that it could not ‘definitively’ determine whether North Korea started a recent exchange of gunfire with South Korea intentionally or by mistake but found that both sides violated the armistice agreement.

The U.S.-led UNC, which is commanded by a US general and administers the Demilitarized Zone (DMZ) and enforces the armistice that halted the 1950-53 Korean War, came to the conclusion after an investigation into the incident that lasted several weeks. During the exchange of fire which occurred on the 3rd of May, four bullets from the North hit a South Korean guard post, and South Korean troops returned fire.

Right after the gunfire, South Korea sent a notice to the North and called for an explanation, but Pyongyang still has not responded.

It was the first exchange of gunfire between South and North Korea in years. Under the Comprehensive Military Agreement signed in September 2018, the two Koreas agreed to halt all hostile acts against each other, a move aimed at reducing tensions and building trust.

The DMZ, which is about 250 kilometres long and 4 km wide, is one of the world’s most heavily fortified borders and has often been a flashpoint between the rival Koreas.

Following the incident, the UNC dispatched a multinational special investigation team for a probe, which was observed by the Neutral Nations Supervisory Commission in an attempt to ensure transparency and fairness, the command said, adding that the South Korean military fully cooperated with the investigation.

Earlier, South Korean military authorities said they believe the incident was not an intentional provocation based upon evidence secured from various intelligence sources.

According to the UNC investigation, North Korea committed the first violation as it fired four rounds of 14.5-millimeter small arms from its guard post located on the northern side of the inter-Korean border which hit a South Korean guard post (without causing any casualties).

The UN Command invited the North Korean military to provide information on the case, and the North acknowledged receipt of the request. But it has not offered a formal response.

South Korea also violated the armistice by responding ‘with two volleys of gunfire’ toward North Korea, according to UNC.

“Based on the investigation’s comprehensive findings, UNC personnel will engage in follow-on discussions with both sides to encourage an implementation of measures to prevent a recurrence of Armistice violations,” the command said.

According to Article 1 of the agreement, neither side “shall execute any hostile act within, from, or against the demilitarized zone.”

South Korea’s defence ministry expressed regret that the UNC drew the conclusion without being able to complete its investigation of North Korea’s motives, and claimed that the South responded to the North’s gunfire appropriately and in accordance with a response manual.

“We will continue to fully implement the Sept. 19 military agreement and take other measures to ease military tensions and to promote peace on the Korean Peninsula,” the ministry said, citing the inter-Korean military pact signed in 2018.

Noting that the armistice agreement is meant to minimize the risk of incidents such as gunfire exchange, UNC said it will continue to identify and implement ways to improve conditions for peace and stability on the Korean Peninsula…”

The future of the peace dialogues appear bleak at the moment as both sides appear to be moving further away from the preliminary concessions and confidence-building measures taken to facilitate negotiations and explore additional steps to build cooperation and trust. Although South Korean President Moon Jae-in has recently expressed the hope that cooperation projects can still progress in several fields, and in March North Korean leader Kim Jong-un sent a letter to his counterpart expressing his belief that South Korea would prevail over the Coronavirus outbreak, and his wish for the good health of his compatriots in the south, recent developments are threatening to decisively derail the peace process for what could be a long time.

In this respect, the South Korean president’s belated efforts to keep the peace process alive also seem to be facing determined resistance from within his own military leadership as well as from the US. Apart from the demand that the North completely dismantle its nuclear arsenal before any substantive reciprocal measures will be taken, the military are still conducting what can easily be construed as aggressive exercises and ‘war games’ in areas near the 38th parallel that have been the location of armed confrontation in the past.

Perhaps, South Korea’s military leadership would point out that the North also conducts military exercises and war games too. This is true: for instance, Stars and Stripes reported on 28 February of this year:

The ‘joint strike drill’ off the eastern coast was the North’s first reported military action of the year as nuclear talks with the United States remain deadlocked.

It was aimed at testing the “mobility and the fire power strike ability” of defense units on the front and in the eastern part of the country, the Korean Central News Agency reported.”

They could also point out that numerous South Korea-US military exercises and war games have been suspended or scaled down considerably as gestures of good faith over the last couple of years. This is certainly also correct, and has helped alleviate the hostility and tension that has characterized relations on the Korean Peninsula since the end of World War II. The respective claims in this respect must be evaluated against the nature, scale and stated (as well as probable but unstated) purposes and objectives of such events.

How long will it take for a joint North-South mutual defence and assistance drill to be held? That would really be something…

However, the scaling back of such exercises and drills is also a measure that can be reversed within a matter of hours; this is definitely not the case if the North dismantles its nuclear weapons, which would probably be impossible to replace once given up. Its nuclear arsenal is, moreover, the only real deterrent against a possible attack by the US, which has demonstrated time and time again its willingness, if not downright enthusiasm, triumphalism and glee, for launching wars of aggression (sometimes called ‘wars of choice’ in the US, presumably to avoid any parallel with the Nuremburg Trials) in flagrant violation of the most fundamental precepts and norms of international and also US law.

On the 6th of May, South Korea held military exercises around several islands near North Korea’s maritime border.

In response, a spokesperson for the Ministry of the People’s Armed Forces of the Democratic People’s Republic of Korea made public the following statement on the 8th of May:

“On Wednesday, the south Korean military staged a joint military drill in the hotspot waters in the West Sea of Korea with the involvement of more than twenty fighters of F-15K, KF-16, F-4E and FA-50 belonging to the air combat command of the Air Force and storm boats under the Navy’s 2nd Fleet and others.

Such reckless move of the military warmongers of the south side … does not help the efforts to defuse tension on the Korean peninsula.

Everything is now going back to the starting point before the north-south summit meeting in 2018.

The recent joint drill was staged in the air and sea in the biggest hotspot area in the West Sea of Korea in which military conflicts occurred between the north and the south in the past, and it was openly launched, assuming that there were a “strange sign” and “provocation” from us.

What merits more attention is that the south Korean military staged the said military drill while calling us their “enemy.”

The south Korean military did not hide the fact that the joint military drill aimed at improving its capability to cope with the north’s firepower and surprise “provocation” and at striking the base of the “enemy’s provocation” and repelling the forces supporting it.

The reckless military provocation by the south Korean military is a total denial … (of) the north-south agreement … to stop all the hostile acts against the other party on the ground and in the sea and air, to turn the West Sea zone into the peaceful waters, in particular.

The recent drill served as an opportunity which awakened us once again to the obvious fact that the enemies remain enemies all the time.

Should we remain a passive onlooker when the enemy gets zealous while openly calling for an attack on us?” (LINK)

On 15 May the Korea Herald reported:

“A presidential spokesman confirmed in mid-May that it convened a meeting with military officials in charge of public relations with regard to North Korea’s strong criticism of South Korea’s recent border island drills, emphasizing that the meeting was to discuss media-related policy, not to “reprimand” the military.

The meeting concerned the revelation of an unannounced joint exercise conducted by the Navy and the Air Force on the 6th of May. The next day, an official daily, affiliated with the Ministry of Defence, reported the training staged in the vicinity of northwestern islets near the sea border with the North.

The North’s military then issued a statement describing the action as a grave provocation. It said the military practice was a reminder that, “The enemies remain enemies all the time.” It added, “Everything is now going back to the starting point before the North-South summit meeting in 2018.”

Pyongyang’s angry response came at a time when the Moon Jae-in administration is seeking to resume inter-Korean cooperation, especially against the coronavirus. The presidential spokesman said the Cheong Wa Dae session was meant to review media-related policy, not military drills or operation.”

On the 18th of May Chosun Media group reported:

“The South Korean military has postponed a massive live-fire drill for the Army, Navy and Air Force from this week to June because of ‘bad weather’.

Some critics accuse military authorities for trying not to agitate North Korea amid a quixotic government initiative to interest Pyongyang in cross-border business projects. A military spokesman on Sunday blamed ‘squalls and rain’ that have been forecast.

The drill plan envisions identifying targets with detection devices and launching strikes against any armed provocation in the East Sea. The multiple rocket launcher Chunmoo and Apache helicopters of the Army, the Harpoon and Haeseong-1 ship-to-ship missiles of the Navy, and FA-50 fighter jets of the Air Force were slated to be mobilized.

Earlier, the Defence Ministry declined to confirm whether the drill would be staged…”

Meanwhile, the US continues to take similar provocative steps. In a move that is certain to keep tensions high and reinforce North Korea’s reluctance to unilaterally dismantle its nuclear deterrent capabilities, on Tuesday a Pentagon official asserted that the United States’ nuclear forces are ready and deter all adversaries, including potentially North Korea.

The Pentagon official said during a virtual seminar hosted by the Mitchell Institute for Aerospace Studies:

“I think the Department (of Defense) has taken a view that our nuclear forces, as they exist, are ready and robust and deter all adversaries, whether that’s from Russia to China, to potentially North Korea or Iran. Similarly, they assure allies, whether that’s NATO or South Korea or Japan.”

The remarks follow a report in North Korean state media on Sunday that leader Kim Jong-un presided over a Central Military Commission meeting in which they discussed “new policies for further increasing the nuclear war deterrence of the country.” (LINK)

U.S. President Donald Trump has held three meetings with Kim, but progress has stalled as the US insists that the North completely dismantle its nuclear arsenal before any reciprocal steps will be considered, and the North has demanded sanctions relief and other concessions in return for suspending nuclear and missile tests.

The two sides last held working-level negotiations in October, however experts expect little action before the November presidential election in the U.S.