You are here: Home / The Economic Collapse Blog / More Than 100 Are Dead As The Worst Flu Epidemic In Years Sweeps Across The United States 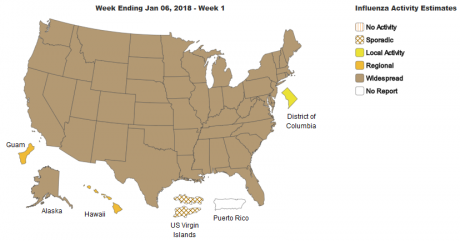 This flu season is already off to a record-setting beginning, and many believe that it could ultimately be the worst that we have seen in decades. In fact, it has been reported that if we stay on this current pace that this could truly be the worst flu season in more than 50 years. As you will see below, the CDC is reporting widespread flu activity from coast to coast, and the death toll has already crossed 100. Here in the United States, flu season usually begins in October and ends in May, and so we still have a long way to go before it is over.

Normally the mainstream media tries very hard to keep the public calm about these things, but even the Washington Post admits that we are having “a terrible, horrible, no good, very bad flu season”…

The nation is having a terrible, horrible, no good, very bad flu season.

Flu is widespread in 46 states, according to reports to the Centers for Disease Control and Prevention.

Nationally, as of mid-December, at least 106 people had died of the infectious disease.

Usually a flu outbreak is centered in one portion of the country, but this one is different. According to the CDC, this outbreak is affecting the entire nation, and the number of cases climbed another 5.8 percent within the past week…

“Flu is everywhere in the US right now,” said Dr. Dan Jernigan, director of the CDC’s influenza branch. “This is the first year we’ve had the entire continental US at the same level (of flu activity) at the same time.” It has been an early flu season that seems to be peaking now, he said, with a 5.8% increase in laboratory-confirmed cases this week over last.

Most people that get the flu don’t die, but it is very important for all of us to understand that this is a very serious outbreak.

In California, things have already gotten so bad that some hospitals have started to run out of Tamiflu…

California has been particularly hard hit, with at least 27 deaths of people under 65 attributed to the flu, according to reports. As the number of cases continues to climb there, hospitals are beginning to run out of Tamiflu, the anti-viral medication used to treat the illness.

If you live in an area where the flu is running rampant, it may be wise to avoid public areas for a while. Unfortunately, the vast majority of us cannot do that. Most Americans have work or school commitments that cannot be avoided, and the flu can often spread very rapidly in those environments.

Back during the bird flu scare a few years ago, some schools actually closed for a time, and we are starting to see that happen again. For example, one school down in Texas had a “flu day” on Friday…

A school in San Antonio will be closed Friday for a “flu day” amid an outbreak of influenza.

“While closed, our school will be launching a Super Clean of each classroom for the health of our faculty, staff and students,” San Antonio Christian School posted on Facebook.

Texas has been especially hard-hit by the flu this season, topping Walgreens’ Flu Index, which compiles data from prescriptions used to treat the virus’ symptoms.

Every year the authorities relentlessly promote the flu shot, but large numbers of people that got the flu shot this year are getting sick anyway.

Sadly, the flu shot is not likely to protect you from the very powerful strains of the flu that are dominant this flu season. In fact, the experts are telling us that the flu shot was only “around 10 percent” effective during the flu season in Australia this year…

U.S. flu specialists say they won’t completely know how powerful this present season’s antibody is until the point that the season is finished. In any case, Australia’s experience recommends viability was just around 10 percent. In the United States, it is 40 to 60 percent powerful in a normal season. Immunizations are less defensive if strains are not the same as anticipated and if sudden transformations happen.

Hopefully everyone out there is stocking up on Vitamin C and echinacea. We still have more than two months of winter left, and the spread of the flu appears to be accelerating.

If you do get sick, please stay home and don’t expose others. Many of us like to try to battle through an illness, and in the process we can inadvertently share it with others.

Eventually this flu epidemic will pass, but for now we need to be smart as we weather this storm.