You are here: Home / Zero Hedge / “Liberal” NYC Cafe Owner Terrorized By Yuppie Neighbors After Claiming He Voted For Trump

After helping to legitimize cancel culture by running countless thinkpieces on the subject while its reporters increasingly adopted a strategy of covering these cancel campaigns and publishing opinion pieces written by (mostly minority) authors arguing extremist positions based on what should be a frightening underlying assumption: That every individual who expresses support for the president, or who in any other way breaks with the liberal orthodoxies espoused by the Times and its staff, is worthy of scorn and shame. Even when people like Chris Cooper, clearly a compassionate individual, say that the now-infamous ‘Central Park Karen’ Amy Cooper has “suffered enough” when he decided not to cooperate with an NYPD investigation into his erstwhile tormentor’s transgressions.

But as the backlash to the ‘cancel culture’ intensifies, fortunately, media figures like Joe Rogan (with his $100 million Spotify deal) are finding places in the media firmament from where they can safely question cancel culture and the notion that Trump and all his supporters are ‘evil demons’ without facing a backlash from big tech and the far left. The fact that Rogan has managed to attain such success is a testament to the weariness with the SJW ‘cancel culture’ and other orthodoxies like “the Patriarchy” and “International White Supremacy” that many millions of Americans, Europeans and others feel. And NYT staffers like Taylor Lorenz and Bari Weiss genuinely believe that Rogan shouldn’t be afforded such a platform. 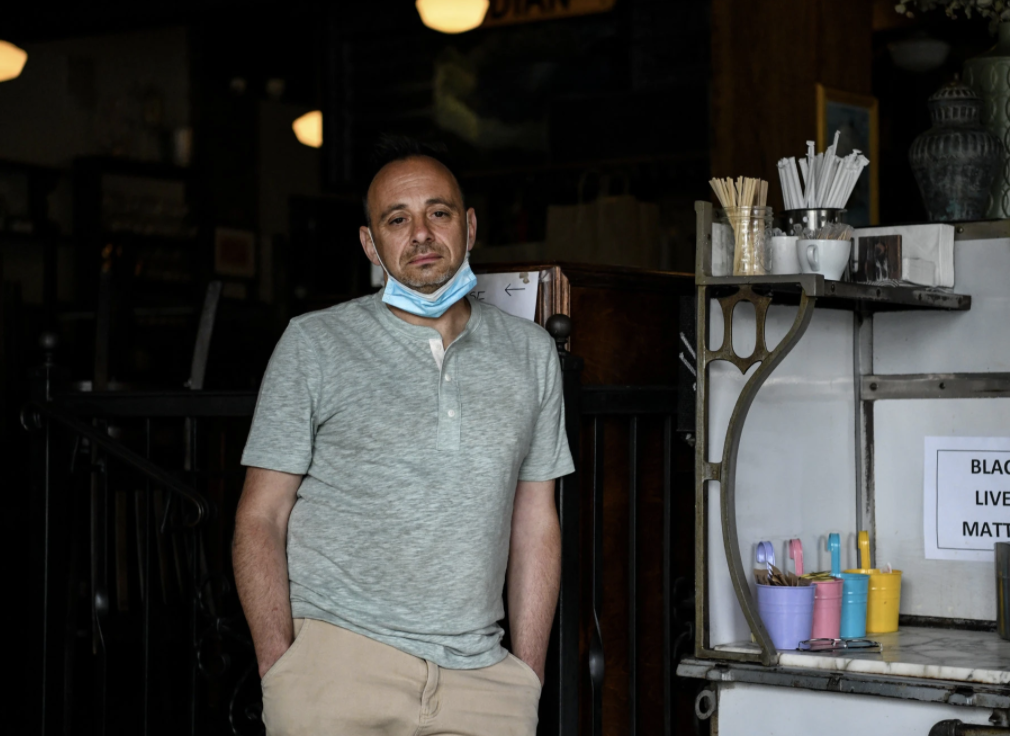 Clearly, the old-timer editors at the NYT who have been swept aside by the left-wing mob are starting to feel a little remorse, because in today’s paper, one of the NYT’s top political correspondents, Azi Paybarah, has published a feature about a bar owner in Inwood, a neighborhood situated on the northern tip of Manhattan, far from the roving tourists and spoiled hipsters who populate the city below.

Thomas Bosco, the owner of the Indian Road Cafe in Upper Manhattan, is by all accounts a good-natured man and a fair employer. When employees can’t find child care, he welcomes children to the restaurant and finds a place for them where they can be supervised. His cafe had become a haven for progressives, and when the protests started, Bosco hung a black lives matter flag in the window.

But when he told a reporter at MSNBC during an interview – he claims he had believed that the comment wasn’t going to be aired – that he had voted for President Trump in 2016, the comment unleashed the hounds on him, and he soon found his business and livelihood facing a boycott as angry former patrons – including two drag queens who had hosted bingo nights at the cafe for years – launched a boycott.

At Indian Road Cafe in Upper Manhattan, a Black Lives Matter sign hangs in a front window. Local writers, artists, musicians and political activists are regulars. And for years, two drag queens have hosted a monthly charity bingo tournament there.

Many in the surrounding Inwood neighborhood considered it a community hub and a progressive oasis.

But then the cafe’s owner, Thomas Bosco, said in an MSNBC interview in late spring that he voted for President Trump in 2016 and was likely to do so again.

Neighbors railed in the comments on various neighborhood Facebook groups, posting hundreds of angry messages aimed at the cafe — and one another. Some people called for a boycott.

“How could I be against Trump and all that he stands for and go somewhere and patronize someone who supports this demon?” Douglas Henderson, 62, a lawyer and nearby resident, said in an interview.

Ironically, Bosco made the appearance during a piece about the difficulties facing American small-business owners during the pandemic. Little did he know that by trying to share his experiences honestly with the public, that he would be made into a target of inchoate rage fanned by the far left.

According to the NYT, the backlash to Bosco’s seemingly innocuous comment “shows how in a highly polarized social media era, a few comments in an interview can reverberate.”

Glennis Aquino-Gil, 37, a resident of Riverdale, in the Bronx, vowed she would never go to Indian Road again.

Randi Weingarten, the president of the American Federation of Teachers, who lives nearby, wrote on Facebook: “It’s hard to ever go back.”

The two drag queens have said they will move their show to a different venue.

The controversy, coming in the middle of a pandemic and the Black Lives Matter protests, shows how in a highly polarized social media era, a few comments in an interview can reverberate: Mr. Bosco said the fallout from his TV appearance, in a segment about small business owners and workers, might put him out of business.

The situation got so out of hand, that Bosco felt he needed to publish an “open letter” to the community explaining his answer. He revealed in the letter that he had voted for the last 4 presidents, and that he considered himself a liberal guy.

Soon after the TV appearance circulated online, Mr. Bosco posted an open letter to the community — “the community I live in, a community I love, respect, and serve” — defending his answer to the question about Mr. Trump’s response to the coronavirus pandemic.

In the appearance, Mr. Bosco said that the president had made missteps, “but at the end of the day, I support him. I support my governor and I support my mayor.” Mr. Bosco then said he voted for Mr. Trump in 2016 and planned to do so again.

In his open letter, Mr. Bosco wrote that he had “answered honestly and from the heart,” but his response had been presented without context. He said that what was in the video did not include that he had supported the last four presidents and that he had “found many things troubling about our administration.”

“I’m a liberal guy who supports almost every liberal cause I can think of,” Mr. Bosco said recently while sitting inside his cafe, empty because of the current ban on indoor dining.

Though the comments received plenty of good feedback, particularly, we suspect, due to his claim that MSNBC had left out a large part of his answer to that question in a manner that was highly suspect. But many are still angry, and expressing that anger on the Internet, mostly. Whether he realizes it or not, Bosco’s apology only made him more of a target since he offered some insight into how editors at NBC News often edit footage with the goal to maximize the ‘audience response’ (ie outrage). More outrage, more clicks. That’s just how it is.

But by trying to show how some ‘liberal’ well-meaning people have voted for Trump, or expressed support for the president, Bosco has made him a target to leftists who will do whatever it takes to preserve the narrative that all Trump voters are racists, and all racists are evil people who deserve to be scorned. Clearly, since Trump is the president, many people in this country don’t agree with this viewpoint. Yet, so-called “leaders” like Joe Biden have pandered to the progressive left at every turn.

In his open letter, Mr. Bosco wrote that he had “answered honestly and from the heart,” but his response had been presented without context. He said that what was in the video did not include that he had supported the last four presidents and that he had “found many things troubling about our administration.”

“I’m a liberal guy who supports almost every liberal cause I can think of,” Mr. Bosco said recently while sitting inside his cafe, empty because of the current ban on indoor dining.

When a worker did not have child care, Mr. Bosco provided it on site, Mr. Bosco and another employee said. They also said that when a different worker feared being stopped by the police and questioned about his immigration status, Mr. Bosco drove that person to and from the cafe.

Bosco is known to friends and customers for allowing his restaurant to become a haven for progressives and he often gives back to the community, and goes above and beyond for his workers. But he also told the NYT that he supported both Bernie Sanders and Trump, a concept that sometimes causes leftists to short-circuit with rage when confronted by evidence of the supposed “myth”.

When a worker did not have child care, Mr. Bosco provided it on site, Mr. Bosco and another employee said.

They also said that when a different worker feared being stopped by the police and questioned about his immigration status, Mr. Bosco drove that person to and from the cafe.

And on the Rev. Dr. Martin Luther King Jr.’s birthday, Mr. Bosco organized a brunch to raise money for an immigrant’s advocacy organization.

He struggled to explain how he voted for Mr. Trump in 2016 after having supported Senator Bernie Sanders of Vermont, a progressive Democrat, earlier that year. Eventually, he settled on the phrase “small government, big community.”

Now, Mr. Bosco says, he is not sure whom he will support in November.

“My staff feels like I let them down to a certain extent,” Mr. Bosco said.

“They feel like when I answered that question, that I didn’t think about them” as employees of the cafe he was representing, he added.

Back in the day, Bosco’s views on politics never mattered. And that would probably still be the case, if it wasn’t for the fact that a wave of yuppie gentrifiers have swarmed Inwood looking for “inexpensive” rents and “more space”, pushing out the mostly working-class immigrants who had called the neighborhood home.

One complainant who chimed in online sneered: “does he know where his restaurant is?”

Mr. Bosco has not made donations to any political campaign, according to city, state and federal records online. And Indian Road is not a chain.

“Does he know where his restaurant is?” asked Caroline Montero, 29, from nearby Washington Heights. The cafe, which will change its name to Inwood Farm this month, is in a gentrifying area with many immigrants.

“Where’s your loyalty?” she added, as she sat in a park across the street from the cafe with Ms. Aquino-Gil and another friend. Sipping drinks purchased from a park vendor, all three vowed to no longer patronize the cafe.

When confronted with the fact that Bosco never donated to Trump, and that he had donated to pro-immigration groups, one neighbor still claimed that didn’t outweigh the fact that Trump was trying to “take away her rights”.

“I appreciate that he’s given money to immigrants rights groups and donated to food pantries,” Ms. Llodrá said in an interview. “That’s great. But it doesn’t take away the fact that he voted for someone in 2016 and planned to vote for someone in 2020 who will take away my rights.”

Assuming she’s an American citizens…how is he trying to do that, exactly?

Now, Bosco says he’s not sure who to support in November because he feels like he ‘let his employees down’ by sharing his feelings. But this is just another example of the ‘Internet mob mentality’ that exists when hyper-progressive NIMBY yuppies see one of their precious orthodoxies being violated. Business owners like Bosco have been in the neighborhood for years, helping to build it into the type of place that out-of-town yuppies might want to live.

And this is the thanks he gets…