You are here: Home / Zero Hedge / Less Than Meets The Eye To Nasdaq Rally?

On an equal-weight basis, the Nasdaq 100 just dropped to a relative all-time low. 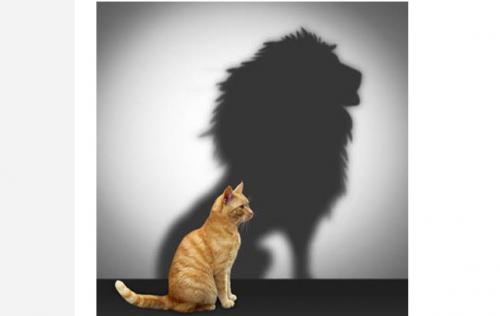 There are many ways to measure the level of participation, i.e., the number of stocks that are taking part, in a stock market rally. One way is to look at the market’s “internals”, e.g., advances vs. declines, new highs vs. new lows, etc. As an indication of good quality participation, we like to see a high number of each of the former vs. each of the latter. Another way of measuring participation is by looking at indices on an equally-weighted basis instead of a cap-weighted basis. In the latter, an index may remain propped up by a relatively few number of stocks, if they are among the largest and most heavily weighted in the index. When that is the case, the market may be susceptible to weakness since it is being supported by just a relatively small number of issues. It could be argued that that is an apt description of the soaring Nasdaq market rally at present.

Why do we say that? As displayed in today’s Chart Of The Day, the equally-weighted Nasdaq 100 is now badly lagging the cap-weighted version. In fact, the relative performance of the First Trust Nasdaq 100 Equal Weight ETF (QQEW) just hit an all-time low when compared with the cap-weighted QQQ ETF. 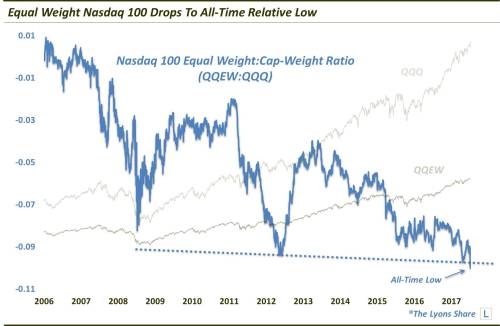 Now admittedly, the inception of the QQEW was in 2006, so an “all-time” low is really just an 11-year low. Even still, that equates to more than a decade of data containing all variations of market environments. Furthermore, as the chart shows, the relative ratio hit proximate lows in 2008, 2012 and 2015-2017. Thus, the recent break to all-time lows does capture our attention.

But how threatening is this development? Is it really just a reflection of the overwhelming strength on the part of the Nasdaq’s mega-cap “generals”, like Amazon (AMZN), Microsoft (MSFT) and Alphabet (GOOGL)? Or is it a genuine warning of deteriorating participation among the “troops”?

If you’re interested in the “all-access” version of our charts and research, please check out our new site, The Lyons Share. Considering what we believe will be a very difficult investment climate for perhaps years to come, there has never been a better time to reap the benefits of our risk-managed approach. Thanks for reading!